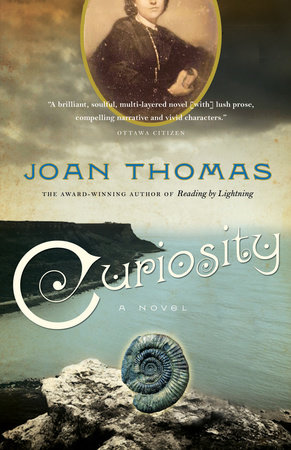 1. The word curiosity has more than one meaning: in what different ways does the title express the content of the novel?

2. In what ways is “A Love Story” a valid description of the novel?

3. Curiosity is set against the backdrop of scientific discoveries that, 40 years before the publication of On the Origin of Species, challenged beliefs that most people living in the Western world at the time held without question. What aspects of these discoveries do you think most people found the hardest to accept, and why? Do you think that a novel set today could ever portray such a momentous shift?

4. What do you think are the particular attractions for an author of setting a work of fiction in the past? The particular challenges? What attracts you to such a novel?

5. A reviewer has said that Thomas writes “magnificent prose that appeals to all the senses. . . . Equally important, Thomas handles the doctrinal debate raised by the then-budding field of geology with [great] subtlety and nuance.” For you, is an author’s ability to bring the physical world to life equally as important as her ability to explore and present complex ideas? If one aspect is more important to you, why is that?

6. About midway through the novel, Mary recalls the pastor James Wheaton’s last sermon and the text he chose from the Book of Matthew: If thine eye be single, thy whole body shall be full of light. Much later in the novel (chapter 30, p. 345), Mary remarks to herself, “This is what comes when your eye is single.” What do you think she means? Why do you suppose this text occurred to her at this point in her life?

7. A number of clergymen play roles in Curiosity and in Mary Anning’s life: Mr. Buckland (who was an Anglican priest by the time he met Mary Anning, and became Dean of Westminster later in life); James Wheaton, the nervous young pastor of the chapel; and Mr. Gleed, who replaces Wheaton. What do each of them mean to Mary? They all profess their religious beliefs at one time or another, usually in an effort to somehow correct her: how does she respond to each of them? What is the “ground” that Mary stands on when she comes into contact with authority?

8. Mary has examples of belief systems that come from sources other than established religion: what are they? Which do you think is most important to her? Why?

9. How would you characterize Richard Anning? Was he a hero? A failure?

10. And what of Henry De la Beche? Discuss the extent to which his ideals and youthful rebellion are or are not fulfilled in the choices he makes later in life. Could he have acted otherwise, with regard to Mary? With regard to his own career?

11. What drew Henry and Mary to each other? Which of the two do you feel had more to offer the other?

12. There are a number of significant female characters in Curiosity besides Mary: her mother, Molly Anning; Miss Elizabeth Philpot; Mrs. Aveline; Letitia Whyte. Which of them, in the end, would you say was the most able to decide her own fate? Which of them was the happiest? Would you characterize any of them as tragic figures? If so, why?

13. Do you think Miss Philpot was a true friend to Mary? Why or why not? How about Colonel Birch? Mr. Buckland?

14. Curiosity is written for the most part from two alternating points of view: why do you think the author chose this particular strategy to tell the story? How do Mary and Henry’s different backgrounds and experiences shape their interpretation of events? In what ways does the author bring these differences to the readers’ attention.

16. The Khosian woman known as Saartjie Baartman was displayed in London in 1810 and after, but there is no historic evidence that Henry De la Beche saw her there. Why do you think the author imagines this encounter? How significant do you think Henry’s unusual childhood was in shaping the youth, and then the man, he became?

17. In their last encounter in the Undercliff, Henry says to Mary, “I saw the end of all our science.” What does he mean by this?

18. The major characters in Curiosity are based on historical people. How do you feel about the author’s responsibility to “reality” in a work of fiction? Are all facts open to interpretation, or are some matters more sacred than others? Does the amount of time passed make any difference?

19. If you could go back to mid-19th century Lyme Regis and hear about the events of Curiosity from one of the characters other than Mary Anning or Henry De la Beche, who would it be? Why?

A Room with a View and Howard’s End
E.M. Forster

The Book of Fires
Jane Borodale

The Gospel According to the Son
Norman Mailer

The Complete Novels of Jane Austen, Volume I
Jane Austen

Where the Light Falls
Katherine Keenum

The King’s Daughter
Sandra Worth
Back to Top