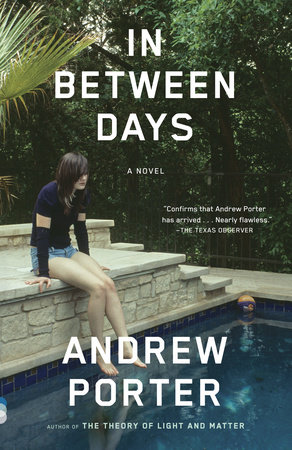 print
In Between Days Reader’s Guide

The introduction, discussion questions, and suggested further reading that follow are designed to enliven your group’s discussion of Andrew Porter’s engaging first novel, In Between Days.

The Harding family of Houston is in the midst of an upheaval. Recently divorced, Elson and Cadence find themselves thrown together when their daughter, Chloe, returns home after being forced to leave her East Coast college under troubling circumstances. Into the mix come Elson’s girlfriend, Lorna, and Chloe’s older brother, Richard, a poet working at a coffee shop and struggling with what it means to be a writer. When Chloe’s boyfriend, Raja, also flees to Houston, bonds of friendship and family are tested to their breaking points. Psychologically astute and utterly compelling, In Between Days asks us what responsibility we have toward our own lives and the lives of others.

1. Andrew Porter’s title, In Between Days, is an evocative one. What do you think the “in between days” are? Does the phrase resonate differently for each character?

2. What do you think went wrong in Cadence and Elson’s marriage? Do you think they would have gotten back together if Lorna hadn’t been pregnant?

4. When Chloe first starts dating Raja, the narrator says, “It was impossible to explain, but she felt drawn to Raja in a way that she had never felt drawn to another human being before. And it didn’t seem to have anything to do with logic” (p. 97).  Later, when the couple is in Houston together, the narrator observes, “It was the first time in her life that she’d felt that someone else was actually depending on her” (p. 136). Upon what foundation is Raja and Chloe’s relationship built? It is a relationship that withstands enormous pressures—what do you imagine their future will bring?

6. What role do some of the secondary characters play in the novel? What do you make of Simone’s conversations with Chloe and later with Cadence? What do you think Michelson wanted from Richard? What themes does Gavin’s relationship with his disabled son represent?

7. What kind of people do you think Chloe and Raja are? Chloe remains loyal to Raja, but leaves her family. Raja won’t turn on his friend Seung, but will abandon his family and have Chloe abandon hers. Do you admire them for their decisions?

8. Imagine yourself in the role of each character: Would you have behaved the same way or differently in the situation if you were a parent? A sibling? A girlfriend/boyfriend?

9. Cadence asks herself how she can “blame her daughter for doing the exact same thing she had done?” (p. 158). Do you think her early marriage to Elson clouds her judgment in deciding what to do when Chloe is missing? She says that she trusts her daughter, but do you think that trust goes too far?

10. What role does betrayal play in the book? Who betrays whom? Does the idea of betrayal mean the same thing to every character?

11. In referring to Seung, Raja says, “If I truly believed myself to be innocent, then I would protest, you’re right, I’d testify against him, but I don’t” (p. 244). What does innocence mean for Raja? Do you think Chloe has the same belief? What is your own opinion about Raja’s guilt or innocence? Would your opinion have changed if Tyler had died instead of recovering?

12. What do you make of Cadence’s, Richard’s, and Elson’s reactions to Chloe’s final disappearance? Why does Cadence hire the private investigator? Why does Richard suggest that “maybe we should just let her be lost for a while . . . Maybe she’s just not ready to be found” (p. 312). Do you think Elson is right to believe that Chloe “thought so little of them. That she hadn’t even bothered to call” (p. 316)? How do anger, guilt, sadness, perhaps even jealousy play a role in their reactions?

13. At the heart of the book is a family, one that is tested and breaks apart. In thinking about her family’s past, Chloe believes, “It had been the greatest hypocrisy of all. These family meals. The greatest charade” (p. 22). What is Porter saying about families in the novel? Does it seem as if the Hardings were a charade from the beginning?

14. At the end, Chloe wonders, “Was it possible that the only true way to escape your past was to erase it, to erase yourself, to invent a new identity, to sever all ties from your family and friends, your country of origin? And if this was true, then how long could it last?” (p. 320). What do you make of her questions? Has she succeeded in escaping her past? Is it possible to even do so?

Andrew Porter is the author of the story collection The Theory of Light and Matter, which won the Flannery O’Connor Award. A graduate of the Iowa Writers’ Workshop, he has received a Pushcart Prize and a James Michener/Copernicus Fellowship. His work has appeared in One Story,  The Threepenny Review, and on public radio’s Selected Shorts. Currently, he teaches fiction writing and directs the creative writing program at Trinity University in San Antonio, Texas.

Freedom by Jonathan Franzen; The Ice Storm by Rick Moody; The Marriage Plot by Jeffrey Eugenides; What Happened to Sophie Wilder by Christopher R. Beha; Please Look After Mom by Kyung-Sook Shin; Carry the One by Carol Anshaw; Forgotten Country by Catherine Chung
Learn More About In Between Days
print

No Book but the World
Back to Top