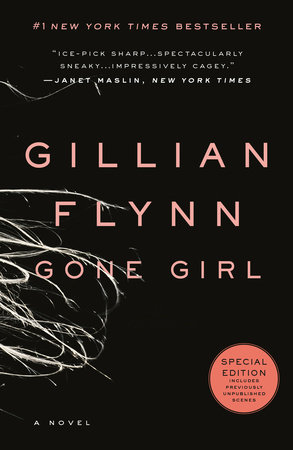 Introduction
Deceit, infidelity, suspicion . . . and that’s only the beginning.
When Nick and Amy fall in love, they are the confident, handsome man and the beautiful, privileged young woman embracing in front of their Brooklyn Heights brownstone and sharing a laugh at the expense of less blissful couples. Eventually, their picture-perfect union falters: Amy grows weary of the “cool girl” image she’s portrayed; Nick gives rein to old impulses and easy lies. As with many marriages, friction works its way into everyday exchanges, and the glow of the honeymoon fades. But with Amy and Nick, that fracture takes a much darker turn.

In a story full of surprising twists, Gillian Flynn’s Gone Girl tracks the course of a marriage gone spectacularly wrong. For the protagonists, it’s a psychological battle with everything at stake; for the reader, an excavation of human failings and incredible depths of betrayal . . . and a mystery whose resolution is every bit as troubling as its beginning.

Questions and Topics for Discussion
1. Do you like Nick or Amy? Did you find yourself picking a side? Do you think the author intends for us to like them? Why or why not?

2. Does the author intend for us to think of Nick or Amy as the stronger writer? Do you perceive one or the other as a stronger writer, based on their narration/journal entries? Why?

3. Do you think Amy and Nick both believe in their marriage at the outset?

4. Nick, ever conscious of the way he is being perceived, reflects on the images that people choose to portray in the world—constructed, sometimes plagiarized roles that we present as our personalities. Discuss the ways in which the characters—and their opinions of each other—are influenced by our culture’s avid consumption of TV shows, movies, and websites, and our need to fit each other into these roles.

5. Discuss Amy’s false diary, both as a narrative strategy by the author and as a device used by the character. How does the author use it to best effect? How does Amy use it?

6. What do you make of Nick’s seeming paranoia on the day of his fifth anniversary, when he wakes with a start and reports feeling, You have been seen?

7. As experienced consumers of true crime and tragedy, modern “audiences” tend to expect each crime to fit a specific mold: a story, a villain, a heroine. How does this phenomenon influence the way we judge news stories? Does it have an impact on the criminal justice system? Consider the example of the North Carthage police, and also Tanner Bolt’s ongoing advice to Nick.

8. What is Go’s role in the book? Why do you think the author wrote her as Nick’s twin? Is she a likable character?

9. Discuss Amy’s description of the enduring myth of the “cool girl”—and her conviction that a male counterpart (seemingly flawless to women) does not exist. Do you agree? Why does she assume the role if she seems to despise it? What benefit do you think she derives from the act?

10. Is there some truth to Amy’s description of the “dancing monkeys”—her friends’ hapless partners who are forced to make sacrifices and perform “sweet” gestures to prove their love? How is this a counterpoint to the “cool girl”?

12. How does the book deal with the divide between perception and reality, or between public image and private lives? Which characters are most skillful at navigating this divide, and how?

13. How does the book capture the feel of the recession—the ending of jobs and contraction of whole industries; economic and geographical shifts; real estate losses and abandoned communities. Are some of Nick and Amy’s struggles emblematic of the time period? Are there any parts of the story that feel unique to this time period?

14. While in hiding, Amy begins to explore what the “real” Amy likes and dislikes. Do you think this is a true exploration of her feelings, or is she acting out yet another role? In these passages, what does she mean when she refers to herself as “I” in quotes?

15. What do you think of Amy’s quizzes—and “correct” answers—that appear throughout the book? As a consistent thread between her Amazing Amy childhood and her adult career, what does her quiz-writing style reveal about Amy’s true personality and her understanding of the world?

16. Do Nick and Amy have friends? Consider Nick’s assurance that Noelle was deluded in her claims of friendship with Amy, and also the friends described in Amy’s journal. How “real” are these friendships? What do you think friendship means to each of them?

17. What was the relationship between Amy and Nick’s father? Do you think the reader is meant to imagine conversations between the two of them? Why does Nick’s father come to Nick and Amy’s home?

18. Amy publicly denounces the local police and criticizes their investigation. Do you think they did a good job of investigating her disappearance? Were there real missteps, or was their failing due to Amy’s machinations?

19. Do you believe Amy truly would have committed suicide? Why does she return?

20. Were you satisfied with the book’s ending? What do you think the future holds for Nick, Amy, and their baby boy?
Learn More About Gone Girl
print

The Girl on the Train

A Wanted Man (with bonus short story Not a Drill)

Me Before You
Back to Top