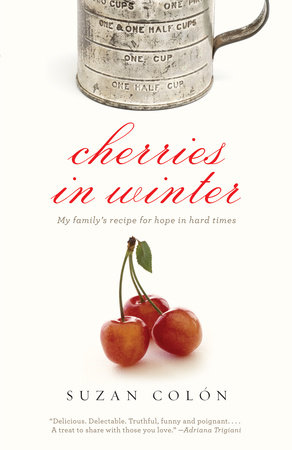 The questions for discussion and reading list that follow are intended to enhance your reading group’s discussion of Cherries in Winter, Suzan Colón’s inspirational memoir about three generations of women who find solace in the comfort of their kitchens when hard times hit.

When Suzan Colón was laid off from her dream job at a magazine during the economic downturn of 2008, she needed to cut her budget way, way back, and that meant home cooking. Her mother suggested, “Why don’t you look in Nana’s recipe folder?” In the basement, Suzan found the tattered treasure, full of handwritten and meticulously typed recipes, peppered with her grandmother Matilda’s commentary in the margins. Reading it, Suzan realized she had found something more than a collection of recipes—she had found the key to her family’s survival through hard times.

Suzan began re-creating Matilda’s “sturdy food” recipes for baked pork chops and beef stew, and Aunt Nettie’s clam chowder made with clams dug up by Suzan’s grandfather Charlie in Long Island Sound. And she began uncovering the stories of her resilient family’s past. Taking inspiration from stylish, indomitable Matilda, who was the sole support of her family as a teenager during the Great Depression (and who always answered “How are you?” with “Fabulous, never better!”), and from dashing, twice-widowed Charlie, Suzan starts to approach her own crisis with a sense of wonder and gratitude. It turns out that the gift to survive and thrive through hard times was bred in her bones all along.

1. Do you remember your grandmother, mother, or another family member cooking for you? What was that person’s signature dish? Is there one meal or dish that has been passed down through the generations in your family?

2. Suzan has strong emotional connections to food. What foods bring back pivotal moments in your life?

3. Suzan’s family has a motto that describes how they get through difficult times—”Put up soup.” Do you or your family have a similar motto? If so, does that saying have a different resonance for you today than it did when you were growing up?

4. How has your family handle adversity? What did that experience teach you about dealing with challenging issues and times?

5. What examples in the book show that good things can come from tough times? Have you found this to be true?

6. There are a lot of emotions tangled up in money. For example, do you think Matilde, Suzan’s great-great-grandmother, was being irresponsible when she spent her family’s food money on vases, or do you feel that sometimes it’s okay to splurge on something meaningful, even if it means going without for a while? How does this relate to America’s credit card crisis?

7. What foods traditionally served in your family help you trace your origins?

8. In what way do you pass your family’s stories down to your children and grandchildren? Do you have photo albums, recipe books, or a written history? If you pass the stories down orally, would you want to tape record them or be videotaped so that your family’s history could be preserved for future generations?

9. There are plenty of songs written about overcoming adversity. If Suzan’s life and Cherries in Winter were to have a soundtrack—what songs would be appropriate to add to its track list?

Suzan Colón is a contributing writer and editor for O, The Oprah Magazine. Her articles have appeared in Marie Claire, Harper’s Bazaar, Rolling Stone, Details, and other magazines. She lives in New Jersey with her husband, Nathan.

The Measure of My Powers
Jackie Kai Ellis

Coming to My Senses
Alyssa Harad

My Life from Scratch
Gesine Bullock-Prado

Such a Pretty Fat
Jen Lancaster

It Must’ve Been Something I Ate
Jeffrey Steingarten

The Cassoulet Saved Our Marriage

Anything That Moves
Dana Goodyear

For You, Mom. Finally.
Ruth Reichl

The Art of Eating In
Cathy Erway