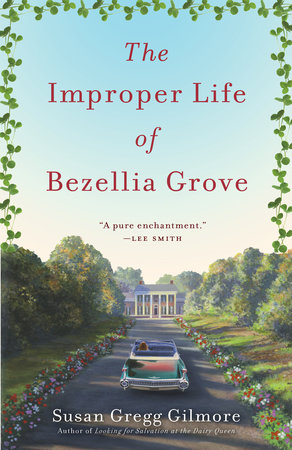 In order to provide reading groups with the most informed and thought-provoking questions possible, it is necessary to reveal important aspects of the plot of this novel—as well as the ending. If you have not finished reading The Improper Life of Bezellia Grove, we suggest that you wait before reviewing this guide.

1. Bezellia’s mother detests her daughter’s name to the point that she refuses to let it cross her lips, instead calling her oldest daughter only “Sister.” What is implied in this nickname? How was Bezellia’s life affected by this grand-sounding name?

2. Mrs. Grove warns her young daughter that she should look for only three things in a man: that he wears cashmere, drives a convertible, and can dance. Does she truly believe this credo, and what is Bezellia’s reaction to this advice? Furthermore, how did Mrs. Grove’s marriage into a socially prominent family affect her ability to parent?

4. Bezellia thinks that she and Samuel face some of the same issues and want the same things (p. 76). Do you agree? What are the similarities and differences in what they each must confront?

5. An interracial romance in the South during the late 1960s could be a very difficult, if not dangerous, relationship. How do Nathaniel and Mrs. Grove feel about seeing their children together? Later in the book, why didn’t Bezellia encourage Samuel to leave the South so they could fully explore their relationship? And to what extent do you think these issues still exist for interracial couples both above and below the Mason-Dixon line?

6. Maizelle shares a story with Bezellia about her own mother washing laundry for white people (p. 79), in which her mother endured hardships and was beaten after an altercation in which she was unjustly accused of not doing her work. What is Maizelle trying to teach this young woman?

7. After she is invited to Ruddy Semple’s house for dinner, Bezellia daydreams about being Ruddy’s wife. What does this vision reveal about the Groves’ eldest daughter?

9.  Several newspaper articles are interspersed throughout the book. How do these pieces affect the story line?

10.  When Dr. Grove dies, a wake is held at the family home. How is the etiquette of death in the South different from other regions in the country? Does this formal process help the Groves through a difficult time?

11.  Bezellia’s little sister always walks to the beat of her own drum, to say the least. Adelaide herself talks about not being afraid to be alone unlike most people. Do you think Adelaide is truly not well, as her mother believes, or is she just content to live her life differently from those around her? In that way, is she or is she not like her older sister?

12.  Do you believe that Maizelle and Nathaniel are representative of those who worked for white families in the South? In what ways did they change Bezellia’s life? Do you think she would have become the same person without their influence? Do you think family is always about blood relationships, or can we create our own family?

13.  The title of the book states that Bezellia’s life is “improper”. What is meant by that? How does Bezellia, if at all, affect the thoughts and attitudes of those in her 1960s Southern city? In the end, did she live up to her name?

Learn More About The Improper Life of Bezellia Grove
print

All We Ever Wanted Was Everything

After the End
Back to Top