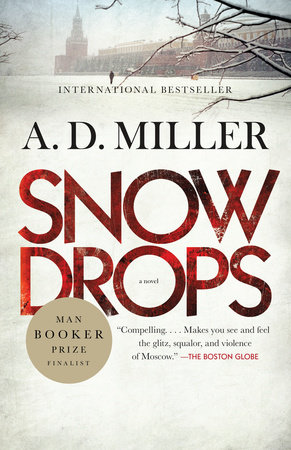 The introduction, discussion questions, and author biography that follow are designed to enhance your reading group’s discussion of A. D. Miller’s Snowdrops, a 2011 Man Booker Prize finalist.

Nick Platt is a British lawyer working in Moscow in the early 2000s—a place where the cascade of oil money, the tightening grip of the government, the jostling of the oligarchs, and the loosening of Soviet social mores have led to a culture where corruption, decadence, violence, and betrayal define everyday life. Nick doesn’t ask too many questions about the shady deals he works on—he’s too busy enjoying the exotic, surreally sinful nightlife Moscow has to offer.

One day in the subway, he rescues two willowy sisters, Masha and Katya, from a would-be purse snatcher. Soon Nick, the seductive Masha, and long-limbed Katya are cruising the seamy glamour spots of the city. Nick begins to feel something for Masha that he is pleased to think is love. Then the sisters ask Nick to help their aged aunt, Tatiana, find a new apartment.

Of course, nothing is as it seems—including this extraordi­nary debut novel. The twists in the story take it far beyond its noirish frame—the sordid and vivid portrayal of Moscow serves as a backdrop for a book that examines the irresistible allure of sin, featuring characters whose hearts are as cold as the Russian winter.

1. Is Nick Platt, the narrator of Snowdrops, a good man who turns bad, a bad man to start with, or neither?

2. Towards the end of the book, Nick says that Masha “had a better excuse.” Do you think Snowdrops is at heart a story about corrupt Russians or corruptible westerners?

3. How far should Nick’s behavior be explained by his circumstances and opportunities in Moscow, and how far by his own temperament and psychology?

4. At what point did Nick begin to question his own motives and sense of ethics?

5. When Nick visits Tatiana Vladimirovna’s apartment for the first time, he says that he “liked her immediately, and…liked her right ‘til the end.” Is that true? If so, why doesn’t it affect how he behaves?

6. Do Nick’s feelings for his fiancée change as he is recounting his tale? How does the relationship implied in the framing device interact with or reinforce his Moscow story?

7. There are several plots in Snowdrops: the main drama involving Tatiana Vladimirovna; the one featuring the Cossack and the floating oil terminal; and the story of Nick’s neighbor, Oleg Nikolaevich, and his missing friend. How do these plots relate to each other?

8. At the beginning of the story, Nick tries to be kind to Oleg Nikolaevich. By the end of it, he is less kind and spends much less time with him. Who suffers most as a result?

9. “I liked the Cossack,” Nick says after their first meeting: “Something about him was endearing…It might be better to say I envied him.” What does he mean by that?

10. At the heart of the novel is Nick’s trip to the dacha in the forest with Masha and Katya: “my happiest time,” he says; “the time I would always go back to if I could”. What does Nick learn at the dacha—about the women and about himself?

11. How much, if anything, of what Masha and Katya tell Nick about themselves do you think is true?

12. The exact years that Nick lives in Moscow aren’t specified in the book. But, thinking about the attitudes of the lawyers and bankers in the story, do you think Snowdrops is amongst other things a pre-credit crunch tale?

14. At one point Nick describes the winter as an “annual oblivion…like temporary amnesia for a bad conscience”. What role do snow and the weather play in Snowdrops?

15. A snowdrop, as Nick’s friend Steve explains to him, is a body that lies buried or hidden in the snow, emerging only in the thaw. What does the image of the snowdrop symbolize in Snowdrops?

A. D. Miller studied literature at Cambridge and Princeton, and worked as a television producer before joining the Economist. He has served as the magazine’s Moscow correspondent and is currently an editor in its London office. Snowdrops is his first novel.
Learn More About Snowdrops
print

The Inspector and Silence

Another Time, Another Life
Back to Top