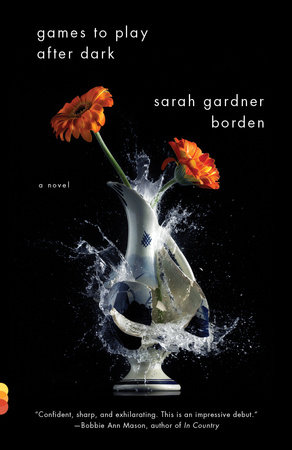 The questions, discussion topics, and suggested reading that follow are designed to enhance your group’s discussion of Sarah Gardner Borden’s Games to Play After Dark, an intimate portrait of a marriage.

Kate and Colin meet at a party in New York City and quickly embark on the rituals of courtship: they recount stories about their pasts, learn to accommodate each other’s quirks, and spend days (sometimes whole weekends) in bed. In thrall to Colin’s need for her and the sexual chemistry between them, Kate giddily accepts his marriage proposal. They move to Connecticut to be close to his work and eventually start a family. Kate adapts to the roles expected of her. She’s a conscientious mother, compliant wife, and works part-time to set a good example for her daughters. Engaged in the demands of day-to-day routines, Kate and Colin seem like any suburban couple. But the games they play after dark are far from routine.

Interweaving disquieting vignettes of Kate’s past and a gripping narrative of a marriage haunted by hidden shames and secret desires, Games to Play After Dark is a novel of astonishing power.

1. Does Kate’s reaction to Colin’s proposal and the future she envisions show a lack of maturity and self-knowledge [pp. 10–11]?  Does she ignore or dismiss the flaws and inequalities in their relationship? What is the significance of the following passage:  “She could see that doing what he wanted was compelling for both of them, and that to resist would interfere with the sexual chemistry that served as foundation for their bond” [p. 15]?

2. How would Kate describe her treatment of her father and the reasons for it [pp. 17–18]?   What details illuminate the emotional undercurrents of the father-daughter relationship and set the stage for the flashback to her childhood?

3. Why is the visit to Colin’s sister and the trip through Europe a turning point in Kate and Colin’s marriage [pp. 32-41; pp. 44–45]?  Are they equally complicit in exploiting each other’s proclivities and weaknesses?

4. After several years of marriage, “Kate and Colin wandered from room to room like bored teenagers . . . .  The sex got rougher, as if to compensate. And every once in a while they would fight, badly” [p. 62].  Is the boredom, lack of passion, and tension they experience a natural progression in marriage? What do Kate’s memories of these early years indicate about her need to see her marriage—and herself—in a certain light [pp. 66–67]?

5. What are the implicit and explicit messages Kate receives about femininity and sexuality during her childhood [pp. 19–22; pp. 68–71]? Do her father’s opinions about marriage and the roles of men and women and their relative value represent a particular class, time, and place? Do you find Dennis’s devotion to Kate and his condescension toward Edie reprehensible? Does Edie reinforce the lessons Kate gets from Dennis?  Is she guilty of neglecting her responsibilities as a mother?

6. Discuss the combination of affection and scorn that characterizes Kate’s attitude toward her mother.  Does she see Edie in a more compassionate light as the novel unfolds? If so, what accounts for this?

7. The relationship between Kate and Dennis profoundly changes when Kate enters adolescence. For Kate, “the fault, the source of their estrangement, is hers; the problem rises directly from her flighty, supplicating body”  [p. 79].  Does this self-perception influence—and validate—her sexual encounters with the Anderson boys next door?  Why does she choose Rudy rather than Topher as the object of her sexual drives and desires [pp. 195–207]?

8. Why does Kate exclude Colin from the events surrounding her father’s death [pp. 82–95]?  Does she deliberately provoke Colin when she returns home, and if so, what is her motivation?  What is the literal and symbolic significance of Kate’s breaking and cutting herself on the glass bowl?

9. As she adjusts to motherhood, Kate experiences the mixed emotions shared by many women. Do the images she conjures up (“The fatigue was like a small rodent working its way through her brain” [p. 104]) and comparison she makes between having a household and “a rare glandular disorder” [p. 105] express these feelings well or did you find them disturbing?  Do the conflicts Kate and Colin deal with reflect the reality of contemporary middle-class marriage [pp. 107–132]?

10. What light does their session with the therapist shed on the sources of their anger, anxieties, and priorities as individuals and as a couple [pp. 137–148]? Do the revelations have an effect on the way they think about and interact with each other?

12. Why does Kate have an affair with Jack Auerbach? What role does her dissatisfaction with her life and marriage play? How does Jack’s connection to her father enhance his appeal as a friend and as a sexual partner?

13. What do Dennis, Colin, and Jack have in common? In what ways do Kate’s relationships with them blur the lines between the attachment of parent and child and the romantic feelings and intimacy shared by lovers?

14. How has Kate changed by the end of the novel? Why does she make the decision she does?

15. Does the author depict the men and women in an even handed way? Does she employ stereotypes in her portraits of the main characters?  To what extent are the men seen as villains and the women as victims? Would you describe Games to Play After Dark as a feminist novel?

16. As a child, Kate internalizes the voices of the Valkyrie Valeries and they continue to haunt and taunt her throughout her life. What do the Valkyries, the mythological warrior maidens of Norse myth, and the trio of Valeries represent?  What situations or emotional states trigger their appearances?

17. The ongoing chronology of the novel is alternated with flashbacks to Kate’s past.  How does the focus of the flashbacks evolve as the book progresses? In what ways do the flashbacks enhance and clarify the present?  What does the novel reveal about why we fall in love with the people we do?

18. Games to Play After Dark deals with the serious issue of abuse and its consequences in a direct, often harrowing manner. Why does Borden include these graphic scenes? What reasons or explanations does the novel give for domestic violence? Discuss the impact of physical abuse on the bonds among family members.

19. What associations did the title have for you before you read the novel? In what ways does it redefine and expand your understanding of the games men and women play?

Sarah Gardner Borden holds an MFA from the Warren Wilson Program for Writers. Her fiction and non-fiction have appeared in a variety of journals, including Open City, Willow Springs, the Chicago Reader, Other Voices, Literary Mama, and the New Haven Review. She lives in Brooklyn.