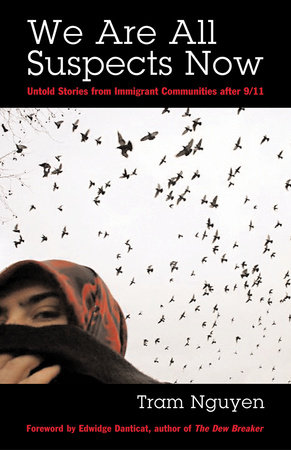 We Are All Suspects Now

Untold Stories from Immigrant Communities after 9/11

About We Are All Suspects Now

In an ironic reversal of the American dream, a staggering 20,000 members of the immigrant community of Midwood, Brooklyn (known as Little Pakistan), voluntarily left the United States after 9/11. Tram Nguyen reveals the human cost of the domestic war on terror and examines the impact of post-9/11 policies on people targeted because of immigration status, nationality, and religion. Nguyen’s evocative narrative reporting–about the families, detainees, local leaders, community advocates, and others living on the front lines–tells the stories of people who witnessed and experienced firsthand the unjust detainment or deportation of family members, friends, and neighbors. We meet Mohammad Butt, who died in detention in New Jersey, and the Saleems, who flee Queens for Canada. We even follow a self-proclaimed ’citizen patroller’ who monitors and detains immigrants on the U.S.-Mexico border.

We Are All Suspects Now, in the words of Mike Davis, “takes us inside a dark world . . . where the American Dream is fast turning into a nightmare and suggests proactive responses to stop our growing climate of xenophobia, intimidation, and discrimination.”

Looking for More Great Reads?
21 Books You’ve Been Meaning to Read
Download Hi Res
We Are All Suspects Now

We Are All Suspects Now