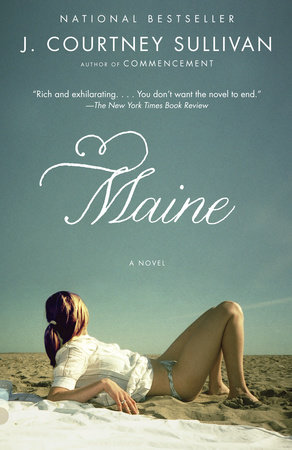 The questions, discussion topics, and reading list that follow are intended to enhance your reading group’s discussion of Maine, J. Courtney Sullivan’s engrossing and entertaining new novel. If you’re not a member of a book club, consider starting one up with your mother or your daughter—Maine is a perfect family read.

Three generations of women converge on the family beach house in this wickedly funny, emotionally resonant story of love and dysfunction from the author of the best-selling debut novel Commencement (“One of this year’s most inviting summer novels” —The New York Times).

The Kelleher family has been coming to Maine for sixty years. Their beachfront cottage, won in a barroom bet after the war, is a place where children run in packs, showers are taken outdoors, and threadbare sweaters are shared on chilly nights. It is also a place where cocktail hour follows morning mass, nosy grandchildren snoop in drawers, and ancient grudges simmer below the surface. As Maggie, Kathleen, and Anne Marie descend on Alice and the cottage, each woman brings her own baggage—a secret pregnancy, a terrible crush, and a deeply held resentment for misdeeds of the past.

By turns uproarious and achingly sad, Maine unveils the sibling rivalry, alcoholism, social climbing, and Catholic guilt at the center of one family, along with the abiding, often irrational love that keeps them coming back every summer to the family house, and to one another.

1. The epigraph pairs two quotes; the first is from Elizabeth Barrett Browning’s poem Aurora Leigh: “Alas, a mother never is afraid, / Of speaking angrily to any child, / Since love, she knows, is justified of love.” The second is from a letter written by F. Scott Fitzgerald to his daughter: “Just do everything we didn’t do and you will be perfectly safe.” Why did the author put these quotes together? Which characters do you think they refer to?

2. If you had to choose one word to describe the overriding theme of Maine, what would it be?

3. Which of the women in the novel would you say is a good mother, and why? Who resents motherhood the most?

4. Discuss how each of the four main characters—Alice, Kathleen, Maggie, and Ann Marie—approaches religion. Who seems to have the most comfortable relationship with God?

5. What was Alice’s motivation for changing her will? Why did she wait so long to tell her family?

6. Speaking of secrets, many of the characters in the novel keep substantial secrets for one reason or another. Whose is the most damaging?

7. What role does alcohol—and alcoholism—play in the novel? How do the characters use alcohol (or abstain from it)?

8. “Even after thirty-three years of marriage, Ann Marie sat at every family dinner and listened to them tell the same stories, over and over. She had never met a family so tied up in their own mythology.” [p. 185] What is the mythology of the Kelleher family? Who is helped the most by it? And harmed the most?

9. What does Ann Marie’s obsession with dollhouses tell us about her character?

11. Why did Daniel’s death have such an impact on the family?

12. What did you think of the revelation about Mary’s death? Was Alice right to blame herself?

13. On page 397, Maggie says to Kathleen, “I actually want this baby. I don’t feel it’s a mistake the way you did with us.” Why does Maggie feel this way about her mother? Do you agree with her assessment?

14. And on page 408, Kathleen says to Alice, “News flash, Mom, you really weren’t that talented. None of us stopped you from becoming anything. That was a stupid childish dream like everyone else has.” How does this relate to Maggie’s earlier outburst? How does the notion of sacrifice play into each woman’s story about herself?

15. How did Ann Marie misread Steve so completely? And why does Kathleen’s witnessing the event change her attitude toward Ann Marie? Why do you think Kathleen reacted the way she did?

16. What kind of mother do you think Maggie will be? Who will she take after most: Alice, Kathleen, or Ann Marie?

17. Discuss the last lines of the book: “She prayed until she heard footsteps behind her, coming slowly down the aisle, a familiar voice softly calling out her name: ‘Alice? Alice. It’s time.’” Is this Father Donnelly, Daniel, or someone else?

18. Which of these women would you like to spend more time with? Are there any you’d never want to see again?

J. Courtney Sullivan is the author of the bestselling novel Commencement. She lives in Brooklyn.

Somewhere Off the Coast of Maine by Ann Hood; A Wedding in December by Anita Shreve; Home Safe by Elizabeth Berg; Summer People by Elin Hilderbrand; The Beans of Egypt, Maine by Carolyn Chute.
Learn More About Maine
print