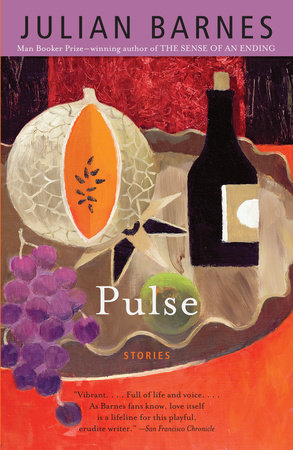 The questions and other material that follow are intended to enliven your group’s discussion of Pulse, Julian Barnes’s elegant and moving new collection of stories.

In Pulse, one of England’s finest writers of fiction explores questions of erotic attraction, the mystery of other people, and the importance of the five senses in our experience of love. Four stories are set at dinner parties at a couple’s house in London, as though eavesdropping on conversation that moves from politics, sex, and love to fears of aging, disease and death. Two stories are set in the past: one observes the troubles of a deaf and mute itinerant painter who has a gift of insight into his subjects but is unappreciated by them, and the other is about a scientist in eighteenth-century Vienna who attempts to restore the sight of a gifted young pianist using magnetism. Other stories range between characters that have great difficulty being close to others, and characters that are blessed with knowing “love at first sight.”
Written with Barnes’s customary wit and precision, Pulse is a moving and often funny engagement with subjects close to every reader’s heart.

1. “East Wind”
Vernon’s wife had told him, “I just can’t live with you because you always fuck things up” (p. 12). What does he do to prove that his wife was right? Why does Vernon betray Andrea’s tentative alliance with him by invading her privacy? What would this story be like if told from Andrea’s point of view?

2. “At Phil & Joanna’s 1: 60/40”
The four “At Phil and Joanna’s” stories are constructed entirely of dialogue and produce the effect of a continuous conversation. Is it difficult to make out who is speaking, and does it matter? What social class do these characters belong to? What pleasures do they take in being together?

3. “Sleeping with John Updike”
What undercurrents are notable in the friendship between Alice and Jane? Who is envious of whom? Which friend is more dependent upon the other? Which aspects of the story strike you as most true, considering friendships between women?

4. “At Phil & Joanna’s 2: Marmalade”
The presence of an American at Phil and Joanna’s highlights the particular psychological and social condition of being English. How is English identity expressed and underscored in this story?

5. “Gardeners World”
How, and why, does the acquisition of a garden upset the equilibrium of Ken and Martha’s marriage? What biblical story do you associate with a couple in a garden? Is this marriage really “a democracy of two”?

6. “At Phil & Joanna’s 3: Look, No Hands”
The characters revisit the premise of Raymond Carver’s well-known story “What We Talk About When We Talk About Love.” Why is there a long pause after each mention of the word “love” (p. 81, 82)? Is it mainly the men who wish to avoid the subject? What do they talk about instead of love? How would you describe these couples, and what, if any, progress is made in their ideas?

7. “Trespass”
Like “East Wind,” this story focuses on a new relationship from the man’s point of view. What qualities in Geoff get on Lynn’s nerves and vice versa? Is Geoff more interested in hiking than in Lynn?

8. “At Phil and Joanna’s 4: One in Five”
What do the four “At Phil and Joanna’s” stories have in common? What kind of impression does the series make? What subjects come up repeatedly? How would these conversations be different with an American setting, in people of roughly the same education and social class?

9. “Marriage Lines”
What does the description of the knitting patterns in local fishermen’s sweaters reveal about the islanders’ understanding of life and death? Why will the widower not return to the island? How does he come to the realization that “he was not in charge of grief. Grief was in charge of him” (p. 128)?

10. “The Limner”
The painter decides that for his final painting, he will make a portrait of his beloved horse (p. 134). Why will this be more satisfying than his usual work? What does the story suggest about the power of the artist to be truthful and just? What do the painter and servants know about dignity that the master does not?

11. “Complicity”
How important is a sense of “complicity” between potential lovers, and what details illustrate this? Both people in this couple have conditions that affect their sense of touch: the man a skin allergy and the woman has poor circulation that leaves her fingers numb, so she wears gloves. How is Barnes using the sense of touch to suggest its role in romantic attraction?

12. “Harmony”
What is wrong with the blind musician in relation to her parents? Does the doctor M— seem to be using an early form of psychoanalysis, such as Freud used on his so-called hysterical patients? The doctor’s operating principle is “music seeks harmony, just as the human body seeks harmony” (159). Does this seem sensible in attempting to heal physical and psychological illness?

13. “Carcassonne”
“Falling in love is the most violent expression of taste known to us” (p. 189), says the narrator, having told the story of Garibaldi’s first sight, through a telescope, of his wife-to-be Anita Riberas. Discuss the story’s ideas about the mystery of taste, and the concept of love at first sight.

14. “Pulse”
What does the narrator’s careful fitness regimen tell us about him? What is his relationship with his parents like? What does he learn about his parents’ marriage when his father loses his sense of smell (p. 200)?

15. The narrator asks, “Do you think there are people who have a talent for marriage, or is it just a question of luck? You would think, wouldn’t you, that if you were the child of a happy marriage, then you ought to have a better than average marriage yourself—either through some genetic inheritance or because you’d learnt from example? But it doesn’t seem to work like that” (p. 217). Why haven’t love and marriage worked for him?

16. Several of the stories feature awkward men who have difficulty with women. Compare Vernon from “East Wind,” Geoff from “Trespass,” and the narrator of “Pulse.”

17. What do the stories of the collection imply with regard to the different talents of men and women for empathy and intimacy? Which of the marriages in the collection seems most successful?

18. How do the stories in Part Two highlight the nature of human attraction? What role does Barnes attribute to the five senses play in the process?

Julian Barnes is the author of two previous story collections, Cross Channel and The Lemon Table, as well as ten novels, two books of essays, a translation of Alphonse Daudet’s In the Land of Pain, and a book-length meditation on mortality, Nothing to Be Frightened Of. His most recent novel, The Sense of an Ending, won the Booker Prize in 2011. He has also won the Somerset Maugham Award, the Geoffrey Faber Memorial Prize, and the E. M. Forster Award from the American Academy of Arts and Letters. In 2004 he was named Commandeur de l’Ordre des Arts et des Lettres by the French Ministry of Culture. He lives in London.

The News from Spain
Joan Wickersham

Notes from the Fog
Ben Marcus

I Know You Know Who I Am
Peter Kispert

How to Save Your Own Life
Erica Jong

To the North
Elizabeth Bowen
Back to Top