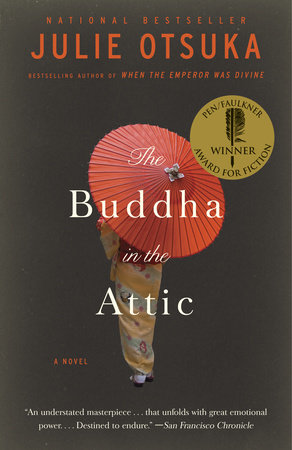 print
The Buddha in the Attic Reader’s Guide

The questions, discussion topics, and suggestions for further reading that follow are intended to enrich your discuss of Julie Ostuka’s The Buddha in the Attic.

In her magnificent new novel The Buddha in the Attic Julie Otsuka spins the clock back to just after the turn of the century, as a group of young women from Japan are brought to San Francisco as mail-order brides. This novel can be viewed as a prequel to Otsuka’s first novel, When the Emperor Was Divine, which has been compared to The Lord of the Flies and To Kill a Mockingbird both for its timeless evocation of a devastating predicament and for the manner in which it has become a contemporary modern classic, read and taught in high schools and colleges all across America. When the Emperor Was Divine captures the experience of a family sent from their home in California to an internment camp during the Second World War.

In The Buddha in the Attic, Otsuka traces the lives of the mail-order brides in eight haunting, incantatory sections: from their arduous voyage by boat, where the girls trade photos of their husbands-to-be and imagine uncertain futures in an unknown land; to their arrival in San Francisco, and their tremulous first nights with their new husbands; to their backbreaking toil as migrant workers in the fields and in the homes of white women; their struggle to learn a new language and a new culture; their experiences in childbirth and raising children who reject their heritage; and finally, the arrival of war, and the agonizing prospect of their internment.

Ostuka has written a spellbinding novel about identity and loyalty, and what it means to be an American in uncertain times.

1. The Buddha in the Attic is narrated in the first person plural, i.e., told from the point of view of a group of women rather than an individual. Discuss the impact of this narrative decision on your reading experience.  Why do you think the author made the choice to tell the story from this perspective?

2. Why is the novel called The Buddha in the Attic? To what does the title refer?

3. The novel opens with the women on the boat traveling from Japan to San Francisco. What does Otsuka tell us is “the first thing [they] did,” and what does this suggest about the trajectories of their lives?

4. What are the women’s expectations about America? What are their fears? Why are they convinced that “it was better to marry a stranger in America than grow old with a farmer from the village”?

5. Discuss Otsuka’s use of italics in the novel. What are these shifts in typography meant to connote?  How do they add to our knowledge of the women as individuals?

6. Otsuka tells us that the last words spoken by the women’s mothers still ring in their ears: “You will see: women are weak, but mothers are strong.”  What does this mean, and how does the novel bear this out?

7. In the final sentence of “First Night,” Otsuka writes, “They took us swiftly, repeatedly, all throughout the night, and in the morning when we woke we were theirs.”  Discuss the women’s first nights with their new husbands. Are there particular images you found especially powerful? How did you feel reading this short chapter?

8. Why was the first word of English the women were taught “water” ?

9. In the section entitled “Whites,” Otsuka describes several acts of kindness and compassion on the part of the women’s husbands.  In what ways were the husbands useful to them or unexpectedly gentle with them in these early days? How does this reflect the complexity of their relationships?

10. What are the women’s lives like in these early months in America? How do their experiences and challenges differ from what they had been led to expect?  How are they perceived by their husbands?  By their employers? Discuss the disparity between the women’s understanding of their role in the American economy and what Otsuka suggests is the American perception of the Japanese women’s power.

11. Later in this section, the women ask themselves, “Is there any tribe more savage than the Americans?” What occasions this question?  What does the author think? What do you think?

12. Discuss the passage on p. 37 that begins, “We forgot about Buddha. We forgot about God. . . . I fear my soul has died. . . . And often our husbands did not even notice we’d disappeared.”  What does Otsuka mean by “disappeared”? What is she suggesting about their spiritual lives, their inner selves?  Do the women reappear in this sense in the course of the novel?  When?

13. Throughout the novel, Otsuka uses the phrase “One of us…”  Why? What is the effect of this shift in point of view?  What does Otsuka achieve through this subtle adjustment?

15. Discuss the complexities and nuances of the relationship between the Japanese women and the white women.  Was it strictly an employer/employee relationship, or something more?

16. What is J-town?  Why do the women choose J-town over any attempt to return home?

17. The section called “Babies” is just six pages long but strikes with unique force. What was your reaction to the experiences of the women in childbirth?  Take a close look at the last six sentences of the chapter, with a particular emphasis on the very last sentence.  On what note does Otsuka end the chapter, and why?  What does that last sentence reveal about Otsuka’s ideas about the future and about the past?

18. “One by one all the old words we had taught them began to disappear from their heads,” Otsuka writes of the women’s children. Discuss the significance of names and naming in The Buddha in the Attic.  What does it mean for these children to reject their mother’s language? What point is Otsuka making about cultural inheritance?

20. Why do the women feel closer to their husbands than ever before in the section entitled “Traitors”?

22. Who narrates the novel’s final section, “A Disappearance”? Why? What is the impact of this dramatic shift?

23. Discuss themes of guilt, shame, and forgiveness in The Buddha in the Attic.

Julie Otsuka was born and raised in California. She is a graduate of Yale University and received her MFA from Columbia University. She lives in New York City.

Julie Otsuka, When the Emperor Was Divine; Wakako Yamauchi, Songs My Mother Taught Me; Hisaye Yamamoto, Seventeen Syllables and Other Stories; Toshio Mori, Yokohama, California; R. A. Sasaki, The Loom and Other Stories; Jamie Ford, Hotel on the Corner of Bitter and Sweet.
Learn More About The Buddha in the Attic
print

TransAtlantic
Back to Top