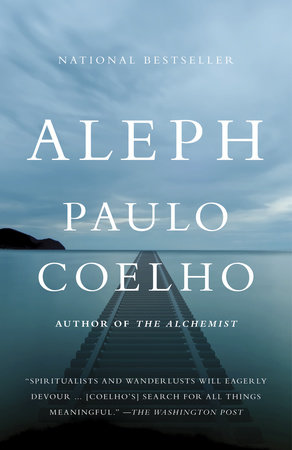 The questions, discussion topics, and reading list that follow are intended to enhance your reading group’s discussion of Aleph.

The Origin of the Aleph
In 1945, Jorges Luis Borges published “The Aleph,” a cryptic short story that introduced his readers to a new and provocative spiritual concept. In it, the narrator—a fictionalized version of Borges himself—is tempted into a dark cellar by a poet and enemy who claims that it contains the true source of his creativity: a small spot that he called the Aleph, or “the only place on earth where all places are—seen from every angle, each standing clear, without any confusion or blending.” Suspicious of the poet’s motives, the narrator is nonetheless dazzled by the visions and sensations that overtake him when he steps past the narrow trapdoor. “The Aleph’s diameter was probably little more than an inch,” he writes, “but all space was there, actual and undiminished. . . . I saw the teeming sea; I saw daybreak and nightfall. . . . I saw the Aleph from every point and angle, and in the Aleph I saw the earth and in the earth the Aleph and in the Aleph the earth.” Overwhelmed, the narrator staggers upstairs to the waiting poet and enacts the ultimate revenge: he pretends he has seen nothing and recommends that the man take advantage of the curative effects of country air and sunshine. But in reality, his entire future has been altered; he dedicates himself to discovering all there is to know about the Aleph, its origins, and the very real possibility that these magical points of infinite understanding exist all over the world.

About This Book
With Aleph, internationally best-selling author Paulo Coelho takes the concept of the Aleph to new heights, spinning it into a novel that rivals The Alchemist in its capacity to transform those who read it. Like the narrator created by Borges, Aleph’s narrator shares key details with his creator: his name is Paulo, and he’s a successful author with a devoted worldwide following. However, this Paulo is facing a grave spiritual crisis, one that threatens to undo his decades-long search for wisdom and understanding. When Paulo poses the problem to his mentor in the magical Tradition, he’s offered a contradictory solution. “You’re not here anymore,” his mentor says. “You’ve got to leave in order to return to the present.”

At first Paulo is skeptical; between his previous spiritual quests and promoting his books, he’s traveled extensively and is tired of dealing with confusing languages and even more confusing currency. But when he’s presented with the rare opportunity to go on tour via the Trans-Siberian Railway, he trusts his mentor’s instincts and embarks on a voyage that he hopes will revitalize his passion for life. He never expects to meet Hilal, a young violinist who fervently insists that Paulo can heal her pain. He’s even more astonished when a chance encounter in an empty train car thrusts them both into an Aleph, leaving the two with visions of a shared past life and a devastating betrayal that prevents them from finding happiness in this lifetime. As they embrace the limitless power of the Aleph and submit to the mercy of the Universe, they—and Aleph’s readers—gain a chance to rewrite their destiny. Inspiring, transformative, and full of Coelho’s unique blend of spiritual and practical wisdom, Aleph is not just a book to read; it’s a book to live.

1. Aleph is a novel full of rituals, starting with Paulo and J.’s opening invocation around the sacred oak. However, Paulo’s reaction to them varies wildly; sometimes they frustrate him (the oak), sometimes he embraces them (the shaman’s midnight chant on the edges of Lake Baikal), and other times he criticizes them for being empty (Hilal’s offering at the church in Novosibirsk). Why do you think this is? Do you think this has to do with the rituals themselves or is Coelho trying to express something deeper about the nature and purpose of ritual? What value can ritual have in your own life?

2. During his initial argument with J., Paulo says: “We human beings have enormous difficulty in focusing on the present; we’re always thinking about what we did, about how we could have done it better, about the consequences of our actions, and about why we didn’t act as we should have. Or else we think about the future, about what we’re going to do tomorrow, what precautions we should take, what dangers await us around the next corner, how to avoid what we don’t want and how to get what we have always dreamed of” [p. 9].  Do you agree? Why do you think J. prescribes travel as a way for Paulo to better focus on the present instead of his past or future?

3. While he’s waiting for a sign that he should embark on the journey J. suggests, Paulo thinks about the nature of tragedy. “Tragedy always brings about radical change in our lives, a change that is associated with the same principle: loss. When faced by any loss, there’s no point in trying to recover what has been; it’s best to take advantage of the large space that opens up before us and fill it with something new. In theory, every loss is for our own good; in practice, though, that is when we question the existence of God and ask ourselves: What did I do to deserve this?” [p. 15]. Many of Aleph’s characters are dealing with extreme personal tragedy, from Hilal and her history of sexual abuse to Yao and the death of his wife. Do their experiences and struggles to move forward support or contradict Paulo’s statements?

4. Paulo frequently refers to Chinese bamboo after reading an article about its growth process: “Once the seed has been sown, you see nothing for about five years, apart from a tiny shoot. All the growth takes place underground, where a complex root system reaching upward and outward is being established. Then, at the end of the fifth year, the bamboo suddenly shoots up to a height of twenty-five meters” [p. 22]. How does this function as an important metaphor for spiritual growth? What do you think are the best ways to build a “complex root system” of your own?

5. Coelho writes, “To live is to experience things, not sit around pondering the meaning of life” and offers examples of people who have experienced revelations in various ways [p. 62]. Do you agree? What people or writings are you familiar with that support (or disprove) his point of view?

6. In “The Aleph,” Borges’s narrator asks, “How, then, can I translate into words the limitless Aleph, which my floundering mind can scarcely encompass? Mystics, faced with the same problem, fall back on symbols: . . . one Persian speaks of a bird that somehow is all birds; Alanus de Insulis, of a sphere whose center is everywhere and circumference is nowhere; Ezekiel, of a four-faced angel who at one and the same time moves east and west, north and south.” How does Coelho attempt to explain the Aleph? Why do you think Coelho has Paulo and Hilal discover it on a train car? Do you think its location has a larger significance for the story?

7. What images, memories, and emotions most powerfully capture the mystery and the magic of the Aleph that Paulo and Hilal experience on the train [pp. 73–75]? How do they affect them each as individuals? In what ways does it change and deepen their relationship?

8. What role does Yao serve in Paulo’s quest?  Are there similarities between Yao, Paulo, and the answers they seek? What does each learn from the other?

9. When Yao suggests that Paulo beg for money with him, he explains, “Some Zen Buddhist monks in Japan told me about takuhatsu, the begging pilgrimage. . . . This is because, according to Zen philosophy, the giver, the beggar, and the alms money itself all form part of an important chain of equilibrium. The person doing the begging does so because he’s needy, but the person doing the giving also does so out of need. The alms money serves as a link between those two needs” [pp. 89–90]. How does this relationship apply to the balance of power between Paulo and Hilal? Between Paulo and his readers?

10. The origin of Paulo’s deep-seated sense of guilt comes stunningly to life in his description of the Inquisition and his participation as a priest [pp. 153–167]. What insight does this vignette offer into horrors and injustices committed in the name of religious beliefs? Compare and contrast the religious attitudes here with those portrayed in the present-day sections of Aleph. What do Paulo’s references to the Koran [p. 39], the Bible [pp. 40, 107], Ueshiba, the founder of the Japanese martial art of aikido [pp. 132, 137, and 193], and shamanism [pp. 220–29] demonstrate about human beliefs and aspirations across cultures and time?

12. Were you familiar with the concept of past lives before reading Aleph?  Is it necessary to believe in past lives to grasp the book’s message and meaning?

13. What do you think Coelho means when he writes, “Life is the train, not the station” [p. 112]? What about when he says, “What we call ‘life’ is a train with many carriages. Sometimes we’re in one, sometimes we’re in another, and sometimes we cross between them, when we dream or allow ourselves to be swept away by the extraordinary” [p. 117–118].

Paulo Coelho is the author of many best sellers, including The Alchemist, Eleven Minutes, and the memoir The Pilgrimage. His books have sold more than 130 million copies worldwide and have been translated into 72 languages. In 2007, he was named a United Nations Messenger of Peace. He lives in Rio de Janeiro, Brazil.

The Kin of Ata Are Waiting for You

The White Book
Back to Top