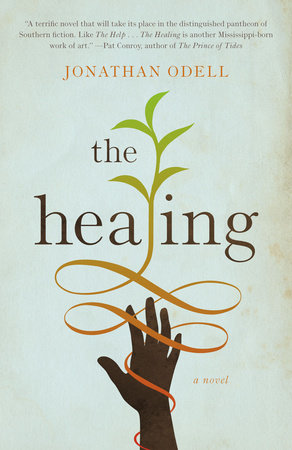 The questions, discussion topics, and reading list that follow are intended to enhance your reading group’s discussion of The Healing, the inspirational, unforgettable, and suspenseful novel by Jonathan Odell.

Rich in mood and atmosphere, The Healing is a warmhearted novel about the unbreakable bonds between three generations of female healers and their power to restore the body, the spirit, and the soul.

In Antebellum Mississippi, Granada Satterfield has the mixed fortune to be born on the same day that her plantation mistress’s daughter, Becky, dies of cholera. Believing that the newborn possesses some of her daughter’s spirit, the Mistress Amanda adopts Granada, dolling her up in Becky’s dresses and giving her a special place in the family despite her husband’s protests. But when The Master brings a woman named Polly Shine to help quell the debilitating plague that is sweeping through the slave quarters, Granada’s life changes. For Polly sees something in the young girl, a spark of “The Healing,” and a domestic battle of wills begins, one that will bring the two closer but that will ultimately lead to a great tragedy. And seventy-five years later, Granada, still living on the abandoned plantation long after slavery ended, must revive the buried memories before history repeats itself.

Inspirational and suspenseful, The Healing is the kind of historical fiction readers can’t put down—and can’t wait to recommend once they’ve finished.

“A remarkable rite-of-passage novel with an unforgettable character. . . . The Healing transcends any clichés of the genre with its captivating, at times almost lyrical, prose; its firm grasp of history; vivid scenes; and vital, fully realized people, particularly the slaves with their many shades of color and modes of survival.” —The Associated Press

1. How does Polly Shine’s approach to medical treatment differ from that of the white doctors who previously treated the Satterfield slaves? What does she mean when she says, “The magic weren’t in the food. It was in the seeing”? Does the way a doctor sees his or her patients determine the prescribed treatment? In your experience, how important is the personal connection between doctor and patient?

2. Many popular works that address interracial relationships rely on a formula of a benevolent white savior empowering downtrodden blacks. Can you think of any books or films that employ this trope? What would Polly Shine say about this? How would she react to history books that claim that African Americans were “given” their freedom, or “given” the right to vote?

3. The “magic negro,” who, by use of special insight or powers helps the white protagonist, is a supporting archetype in fiction. Can you think of any examples of this stock character in other works? Does Polly Shine perpetuate the stereotype of the magic negro, or dispel it?

4. Of what significance are role models in The Healing? How important is it for children to see a reflection of themselves in the powerful and successful people around them?

5. In his research for The Healing, Jonathan Odell consulted an oral history project conducted by the WPA in the 1930s in which thousands of surviving former slaves were interviewed. There were some who said that given the poverty, discrimination, and random brutality they had experienced in the twentieth century, they wished they were still slaves under their old masters. Indeed, Master Satterfield in The Healing is not stereotypically cruel. Are there any instances when he seems sympathetic to his slaves?  Does servitude under a kind tyrant make such a system less objectionable or more?

6. Gran Gran tells Violet, “After Freedom, everybody all of a sudden had to decide where he or she belonged. Nobody to tell them no more. Wasn’t easy for some of us. . . . Some of us picked wrong, I reckon.” What does she mean? How do the other Satterfield slaves satisfy their need for belonging after freedom? What choice does Silas make? Sylvie? Chester?

7. When Rubina turns to Polly for an abortion, the question arises of who has authority over Rubina’s body—the slave master, God, the people, or Rubina herself. Do you think Polly makes the right decision? After 150 years, how does this issue still surface in American life?

8. In the 1950s the medical establishment began a coordinated campaign to discredit midwives, who were still the major health-care providers to rural black women in the South. Yet years after the medical establishment won the battle, statistics showed that in many instances the live birth rate was higher among the black midwives than under the white, professionally trained doctors who replaced them. Why do you think this was so?

9. Polly talks about a “two-headed snake of Freedom” that will bite not only the Master, but the slave as well. What does she mean? And do the events of the novel play out this way?

10. Why doesn’t Polly take Granada with her? Do you agree with her decision?

11. What role does storytelling play in The Healing? How does it influence individuals, communities, and nations? How does the concept of “story” apply to contemporary methods of healing?

JONATHAN ODELL is the author of the acclaimed novel The View from Delphi, which deals with the struggle for equality in pre-civil rights Mississippi, his home state. His short stories and essays have appeared in numerous collections. He spent his business career as a leadership coach to Fortune 500 companies and currently resides in Minnesota.

There Is Confusion
Jessie Redmon Fauset

The World Without You
Joshua Henkin

Gateway to the Moon
Mary Morris
Back to Top