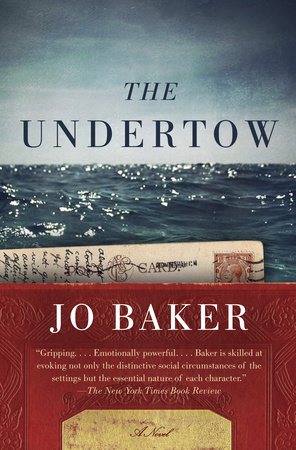 The introduction, discussion questions, and suggested further reading that follow are designed to enliven your group’s discussion of Jo Baker’s American debut, The Undertow, an emotionally complex novel chronicling the lives of the Hastings family through four tumultuous generations.

Jo Baker’s sweeping, hugely ambitious new novel, The Undertow, spans nearly a century in the life of one family, the Hastings, from the outbreak of World War I in 1914 to the wars in Iraq and Afghanistan in 2005. Indeed, war is a constant throughout the novel, shaping the lives of each of its main characters, as world history impinges on personal history in complex and myriad ways.

The book begins as young William Hastings prepares to set off to war. He gives his wife Amelia a photo album and promises to send postcards from every port of call. He keeps his promise but finds himself irresistibly drawn toward the wider world he’s just gotten a taste of. He can’t imagine returning to his grinding, gray factory job after the war is over. In Malta, he talks of jumping ship and declares: “I can’t go back. . . . There’s so much more to see. It’s beautiful” (p. 33). This wish to escape—a wish that in William’s case ends in a horrific entrapment—will run throughout the book, as each of William’s descendants is overtaken by similar feelings, though they express them, and act on them, in quite different ways.

William’s son Billy becomes a champion bicycle racer, escaping from hunger and poverty into the sheer animal joy of biking. “The world is new today. . . . He has a bike. He has speed. He can go anywhere” (p. 55). Starting as delivery boy, he eventually achieves stardom as a bike racer. But he fails to make the Olympic team, and when World War II breaks out, he finds himself racing onto the beach at Normandy. His own son Will is born with a congenital disease, leaving him with a permanent limp and a strained relationship with his father. As a young boy Will, too, mounts a daring escape to avoid an experimental operation to “pin” his hip. He overcomes his disability, attends Oxford, and becomes a college professor, but cannot remain faithful to his wife, Madeline. Will’s daughter, Billie, so distressed by her parents looming divorce, briefly runs away from home, taking a train to her grandparents in London and thus completing her own version of the ritual of escape each generation of the Hastings seems compelled to attempt.

But the desire to escape is not the only thread that runs through the Hastings family history. Secrets, infidelities, great loves and great losses recur as well. Sully, William’s treacherous shipmate who survives the war, makes several menacing, ghostly reappearances—like a repressed thought that will not stay away. But though they all share the same name, and resemble each other, as Billie says to her father, “like Russian dolls,” they are also markedly different.

Baker captures not only the personal changes from one generation to the next, but also the evolution of the zeitgeist—the growing urge toward greater openness and self-awareness, which culminates in Billie, a painter who wants to make people look at what they do not want to see. In a fitting ending to a remarkable book, she tells her father: “You’ve got to look fate right in the eye. You’ve got to stare it down” (p. 327). The desire to escape that runs throughout the novel is beautifully resolved, and overcome, in Billie’s defiant, anti-escapist aesthetic.

1. Why has Jo Baker chosen The Undertow for her title? Where does a literal undertow appear in the novel? What is the metaphoric undertow that exerts a pull on all the main characters?

2. Why does Baker begin the novel with Amelia and William at a cheap movie theater watching a film about treachery, jealousy, and betrayal, but which ends happily: “All troubles are over, all discord is resolved: no one loves the wrong person or wants something they can never have, or has to face something they simply cannot face” (p. 5). How does this opening scene set up some of the themes that will recur throughout the book?

4. The desire to escape is a major theme of The Undertow. In what ways do William, Billy, Will, and Billie all attempt to escape? Why do they feel trapped? What different methods do they use to get free?

5. In what ways are history and family history deeply intertwined in The Undertow? How does the history that one generation lives through affect the next generation?

6. When William wanders into a cathedral on Malta in 1915, he sees Caravaggio’s painting The Beheading of St. John the Baptist and thinks: “This is not a holy picture. . . . This is not a holy place. There’s too much dirt and dark and blood: this is all too human . . . there’s no God, no guidance, no forgiveness here” (p. 21). Nearly ninety years later, Billie views the very same painting. Compare her response, on pp. 311–12, to her great-grandfather’s. How does the painting influence Billie’s own sense of artistic purpose?

7. Why would Billie want to paint “what people don’t look at . . . to paint it and put it in a frame and make it something that people really look at. Deliberately. That they linger over” (p 321)?

8. When Will worries that Billie’s painting of Matthew—which appears in a group of her paintings of wounded soldiers—is tempting fate, Billie says: “I think, whatever it is, by not looking at it, not saying it, not admitting it to yourself, that’s the temptation, that’s the danger. You’ve got to look fate right in the eye. You’ve got to stare it down” (p. 327). Is Billie right about this? In what ways does she embody a new openness that none of her ancestors could achieve?

9. What are the major secrets that run throughout the novel? What are their consequences?

10. How does Billy react to his son Will’s disability? Why does he feel his killing the boy in Normandy was the “down payment” (p. 175) for a second chance at having a healthy son?

12. What role does Sully—William’s shipmate who survived the sinking of the Goliath—play in the novel? Is there a larger significance in his menacing reappearances?

13. When Amelia’s boss, Mr. Jack, mentions the rumor of a new front opening in France, he tells her: “But keep it to yourself, eh?. . .  Keep mum.” Amelia thinks: “Motherhood and silence: why the same word?” (p. 149). What is the connection between motherhood and silence, especially for women of Amelia’s generation?

14. In what ways does The Undertow offer a very personal history of the twentieth century? Discuss the emotional evolution that occurs from William in 1914, through Billy and Will, to Billie in 2005?

15. Why has Jo Baker chosen to end the novel with a scene of lyrical tenderness, as Billie thinks of the future and the present: “There will be illness, and there will be death, and through it all there will be love. But for now, the blackbird still sings outside the window. Now, there is just the kiss, and the taste of coffee, and the clear strong knowledge that this, however long or brief, is happiness” (p. 341)? Why would Billie locate happiness in such a simple, ordinary moment? In what ways does this passage echo Billy’s philosophy of not looking further than the next ten yards?

Jo Baker was born in Lancashire and educated at Oxford University and Queen’s University Belfast. The Undertow is her first publication in the United States. She is the author of three previous novels published in the United Kingdom: Offcomer, The Mermaid’s Child, and The Telling. She lives in Lancaster.

The Book of Aron
Back to Top