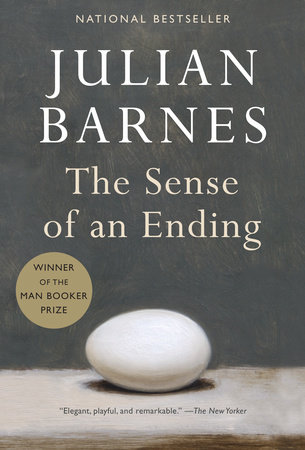 print
The Sense of an Ending Reader’s Guide

The questions, discussion topics, and reading list that follow are intended to enhance your reading group’s discussion of The Sense of an Ending, Julian Barnes’s provocative new novel, winner of the 2011 Man-Booker Prize.

“With great but invisible skill, Barnes squeezes into the novel not just a sense of the infinite complexity of the human heart but the damage the wrong permutations can cause when combined.” —Michael Prodger, Financial Times

“Quietly mesmerizing . . . A slow burn, measured but suspenseful, this compact novel makes every slyly crafted sentence count . . . The concluding scenes grip like a thriller—a whodunit of memory and morality, and one which detonates a minor, private apocalypse.” —Boyd Tonkin, The Independent

The story of a man coming to terms with the mutable past, Julian Barnes’s new novel is laced with his trademark precision, dexterity, and insight. It is the work of one of the world’s most distinguished writers.

Tony Webster and his clique first met Adrian Finn at school. Sex-hungry and book-hungry, they navigated the girl drought of gawky adolescence together, trading in affectations, in-jokes, rumor, and wit. Maybe Adrian was a little more serious than the others, certainly more intelligent, but they swore to stay friends forever—until Adrian’s life took a turn into tragedy, and all of them, especially Tony, moved on and did their best to forget.

Now Tony is middle-aged. He’s had a career and a marriage, a calm divorce. He gets along nicely, he thinks, with his one child, a daughter, and even with his ex-wife. He’s certainly never tried to hurt anybody. Memory, though, is imperfect. It can always throw up surprises, as a lawyer’s letter is about to prove. The unexpected bequest conveyed by that letter leads Tony on a dogged search through a past suddenly turned murky. And how do you carry on contentedly when events conspire to upset all your vaunted truths?

2. The novel opens with a handful of water-related images. What is the significance of each? How does Barnes use water as a metaphor?

3. The phrase “Eros and Thanatos,” or sex and death, comes up repeatedly in the novel. What did you take it to mean?

4. At school, Adrian says, “we need to know the history of the historian in order to understand the version that is being put in front of us” (p. 13). How does this apply to Tony’s narration?

5. Did Tony love Veronica? How did his weekend with her family change their relationship?

6. When Mrs. Ford told Tony, “Don’t let Veronica get away with too much” (p. 31), what did she mean? Why was this one sentence so important?

7. Veronica accuses Tony of being cowardly, while Tony considers himself peaceable. Whose assessment is more accurate?

8. What is the metaphor of the Severn Bore? Why does Tony’s recollection of Veronica’s presence change?

9. Why did Tony warn Adrian that Veronica “had suffered damage a long way back?” (p. 46). What made him suspect such a thing? Do you think he truly believed it?

10. In addition to Adrian’s earlier statement about history, Barnes offers other theories: Adrian also says, “History is that certainty produced at the point where the imperfections of memory meet the inadequacies of documentation” (p. 18), and Tony says, “History isn’t the lies of the victors  . . .It’s more the memories of the survivors, most of whom are neither victorious nor defeated” (p. 61). Which of these competing notions do you think is most accurate? Which did Tony come to believe?

11. Discuss the character Margaret. What role does she play in Tony’s story?

12. Why does Mrs. Ford make her bequest to Tony, after so many years? And why does Veronica characterize the £500 as “blood money”?

13. After rereading the letter he sent to Adrian and Veronica, Tony claims to feel remorse. Do you believe him? What do his subsequent actions tell us?

14. When Veronica refuses to turn over the diary to Tony, why doesn’t he give up? Why does he continue to needle her for it?

15. What is Tony’s opinion of himself? Of Adrian? How do both opinions change by the end of the novel?

16. How does the revelation in the final pages change your understanding of Veronica’s actions?

17. Discuss the closing lines of the novel: “There is accumulation. There is responsibility. And beyond these, there is unrest. There is great unrest” (p. 163).

Julian Barnes’s honors include the Somerset Maugham Award, the Geoffrey Faber Memorial Prize, and the E. M. Forster Award from the American Academy of Arts and Letters. In 2004 he was named a Commandeur de l’Ordre des Arts et des Lettres by the French Ministry of Culture. He lives in London.

A Spot of Bother by Mark Haddon; Mr. Sammler’s Planet by Saul Bellow; Time’s Arrow by Martin Amis; Atonement by Ian McEwan; The Blind Assassin by Margaret Atwood; Fight Club by Chuck Palahniuk.
Learn More About The Sense of an Ending
print

The Children Act
Back to Top