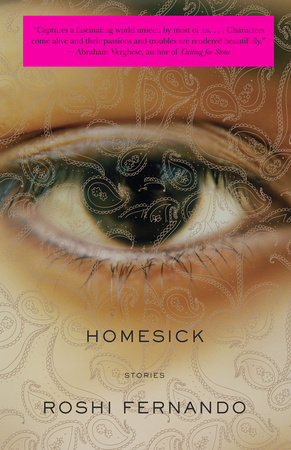 The questions, discussion topics, and reading list that follow are intended to enhance your reading group’s discussion of Homesick, the award-winning, debut work of fiction by Roshi Fernando.

It’s New Year’s Eve 1982. At Victor and Nandini’s home in southeast London, the family and their friends gather to ring in the new year. Whisky and arrack have been poured, poppadoms are freshly fried, and baila music is on the stereo. Upstairs, the teenagers have gathered around the television to watch The Godfather again while drinking pilfered wine. Moving back and forth in time, from the 1970s to the present day, and from London to Sri Lanka and back again, we follow Victor and Nandini’s children: Rohan, Gehan, and in particular dyslexic Preethi—funny, brash, and ultimately fragile. We also meet troubled Lolly and her beautiful sister Deirdre; wonderful Auntie Gertie; and terrible Kumar, whose dark deed will haunt the family.

1. What does the title mean? Who is homesick? Who isn’t?

2. Would you call this a novel or a collection of connected stories? Why?

3. Throughout the book, Fernando moves forward and backward in time, with characters coming to the forefront and receding. What was Fernando’s intent? What effect does this have on you, the reader?

4. Who is the main character in the book? Who did you feel most connected to?

5. In the title story, the younger generation watches The Godfather over and over on video. What connections can you draw between that film and Homesick?

6. Racism and anti-immigrant sentiments are laced throughout the book. Which characters seem best equipped to deal with the world in which they live? Who seemed most adversely affected by the treatment they receive?

8. When Kumar is released from prison, he keeps nothing but the fluorescent jacket, “for that, he thinks, truly belongs to him.” (page 53) Why does he choose this one item? Why does it belong to him?

9. The theme of freedom runs throughout the book. How do the characters’ definitions of the term differ? Why does one feel free, while another feels bound?

10. At the end of “The Turtle,” Fernando writes, “And later, months and years later, when Lucas and her daughters are willowy and stand tall next to her, she thinks of this moment, on this beach, as the moment of knowledge. The moment she covered what was exposed. The moment she opened what was shut away.” (page 90) What moment is this? Why is it so significant?

11. Why is the story about Preethi’s adolescent heartbreak called “Sophocles’s Chorus”?

12. Several characters in the book are homosexual or experimenting. How is their behavior shaped by the community?

13. What does Mumtaz’s broken English tell us about him? Why does he relate to Charlie Chaplin? Were you surprised by the circumstances of Mumtaz’s reappearance later in the book?

In “At the Barn Dance,” Fernando includes the following lyrics, from a song called “Rolling Home” (page 174):

Round goes the wheel of fortune,
Don’t be afraid to ride,
There’s a land of milk and honey,
Waits on the other side.
There’ll be peace and there’ll be plenty,
You’ll never need to roam.
When we go rolling home, when we go rolling, home. . . .

What do these lyrics signify, for Preethi and in the book as a whole?

15. “The Terrorist’s Foster Grandmother” pivots on a substantial coincidence. How might things have played out differently if Gertie and Mumtaz hadn’t been seatmates?

16. In Sri Lanka, Preethi thinks, “Here she realizes one day, reduced to nothing, she has achieved a purity of happiness. And she is ashamed, because all around her is death.” (page 258) How can Preethi be happy here? Why is she?

17. Toward the very end of the book, Nil scolds Preethi: “Either you struggle and survive or you go under. And we’re not going to let you go under.” (page 275) What other characters would have benefited from this advice? Do you think it will help Preethi?

Roshi Fernando grew up in southeast London. She lives in the Cotswolds with her husband, four children, and a multitude of pets. She received her Ph.D. in Creative Writing from Swansea University in 2011. Homesick won the Impress Prize for New Writers in 2009 and was subsequently shortlisted for the Sunday Times EFG Private Bank Short Story Award in 2011.
Learn More About Homesick
print

The Village
Back to Top