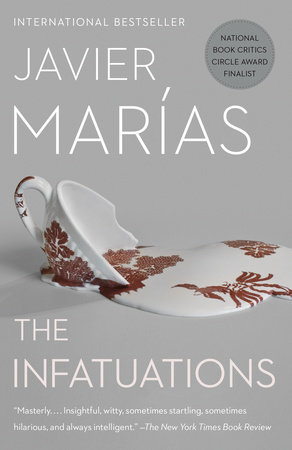 The discussion questions and other material that follow are intended to enhance your group’s conversation about The Infatuations, Javier Marías’s suspenseful novel about love, murder, and the unknown possibilities in every moment of ordinary life.

María Dolz, an editor at a Madrid publishing house, has breakfast each morning at a neighborhood café where she often notices a married couple, also regulars, as they relax with their coffee and prepare to part for the day. She takes to thinking of them as “the perfect couple.” One day, María is shocked to learn that the husband has been the victim of a sensational murder widely covered in the newspapers. He was attacked by a man wielding a knife and lay bleeding in the street as emergency workers tried to save his life. Eventually, the wife—whose name, María learns, is Luisa—returns to the café. María introduces herself and offers her condolences, and Luisa invites her to visit her at home. There María meets Javier Díaz-Varela, a close friend of Luisa and her late husband, Miguel, and soon María and Javier begin a casual affair. But it becomes apparent to María that Javier is in love with Luisa, and is only waiting for her to emerge from a long period of mourning Miguel’s death. One day, while María is in bed at Javier’s apartment, she overhears a conversation between Javier and a man who has come to see him. She learns that Javier has arranged Miguel’s murder. If Javier has plotted the death of his friend, won’t he also be willing to dispose of María once he realizes that she knows his secret? Such are the twists and turns taken by this heady, suspenseful novel, as it investigates the nature of desire and death and the role of time and chance in human and fictional lives.

1. Over the period of a few years, María has spent part of every morning watching a married man and woman in a neighborhood café. She is drawn to them because of their seeming happiness, “as if they provided me with a vision of an orderly or. . . harmonious world” (4). Is this a strange thing to do? What does it reveal about María?

2. The “Perfect Couple,” as María calls Miguel and Luisa, is abruptly severed when a homeless man stabs Miguel to death in a seemingly unmotivated attack. When María learns that Miguel was killed on the same day she last saw him, she realizes that “his wife and I had said goodbye to him at the same time, she with her lips and I with my eyes only” (30). What do you think of María’s reaction to the murder? Is María in love with Miguel?

3. When María visits Luisa, both speculate on what Miguel might have been thinking as he was being stabbed and as he lay dying (50-51). María’s projection of Miguel’s state of mind proceeds in single sentence of more than two pages in length (52-54). What role does the imagination—especially imagining the thoughts or experiences of others—play in this novel? Why do you think the novel is occupied with questions about different possible paths and outcomes?

4. Luisa tells María that Miguel’s death has changed her way of thinking: “It’s as though I’ve become a different person since then . . . with an unfamiliar, alien mentality, someone given to making strange connections and being frightened by them” (49). She now hears a siren and is overcome with dread, not knowing who might be ill or wounded or dying. Has her husband’s death made Luisa think more like a novelist?

5. María imagines that in thinking of the bizarre misfortune of being attacked by a stranger, Miguel might have thought of María herself as one of a number of people “who are merely vague extras or marginal presences, who inhabit a corner or lurk in the obscure background of the painting and whom we don’t even miss if they disappear” (53). If María, as our narrator, is such a vague extra or marginal presence, do her first-person narration and her presence as a central character in the story dispel the notion of her obscurity?

6. Luisa says she would feel better if someone had plotted against her husband. She has looked up the word envidia—envy—and reads a part of the dictionary entry to María: “Unfortunately, this poison is often engendered in the breasts of those who are and who we believe to be our closest friends, in whom we trust; they are far more dangerous than our declared enemies” (61). Luisa later introduces Javier to María as “one of Miguel’s best friends” (59). Do you have suspicions of Javier at this point, or only later?

7. The second time María meets Javier they are in Madrid’s Natural History Museum, where dead animals preserved in the attitudes of life stare out of their cases. Why is this unusual setting relevant to Javier’s view that the grieving Luisa is holding on to “the image of Miguel, (106)” but that she will eventually assign him “a place in time, both him and his character frozen for ever” (107)? Do you agree with Javier that “the only people who do not fail or let us down are those who are snatched from us”?

8. María becomes sexually involved with Javier, and is drawn more deeply into the intrigue surrounding Miguel’s death. Look at the description of Javier on pages 85-86 and discuss what is appealing or provocative about him. How would you characterize María’s feelings toward Javier (117-121)? Is she obsessed? In love? Infatuated?

9. After Miguel’s death, María expresses the idea that the moment of death changes the identity of the person who dies. Javier is convinced that it’s only a matter of time until Luisa realizes that her husband is gone forever. How does Balzac’s novella Colonel Chabert demonstrate Javier’s view that something fixed and permanent divides the living and the dead—even if, as in Colonel Chabert’s case, the dead return to life (131-140)?

10. One night, some time after she and Javier have become lovers, María says, “I found myself wishing or, rather, fantasizing about the possibility that Luisa might die and thus leave the field open for me with Díaz-Varela, since she was doing nothing to occupy that field herself (147). I, for example, could launch an offensive against Luisa behind her back, one so oblique that she wouldn’t be aware of it because she wouldn’t even know that an enemy was stalking her” (151). The novel implies that all human beings are capable of fantasizing about the deaths of people who stand in their way. Do you believe this is true? Is it easy to understand or identify with these thoughts?

11. María is the first female narrator in a Marías novel. In an interview in The Paris Review, Marías noted that his female characters were “always seen through the eyes of a male.” In a scene in which María and Ruibérriz are talking, María has to decide whether she will emerge from the bedroom wearing only her skirt (166-175). Why are her thoughts about her body and her sexuality important in this scene and elsewhere? Why is it effective that the narrator in this novel is a woman?

12. Midway through the novel, Javier’s secret emerges when María overhears him talking to Ruibérriz, who was his intermediary with the homeless man who killed Miguel. Her reaction to this new knowledge is complex. Does she now think of Javier as a murderer, or does she think that Javier set up a chain of events that might well not have resulted in Miguel’s death, so he is not a murderer (176-194)?

13. Marías has said that literature is the “filter” through which he thinks and writes: “What I present to the reader comes from my experience and from what I have invented, but it has all been filtered by literature. That is what matters: the filter” (Paris Review interview). Discuss how the line “She should have died hereafter,” from Macbeth and the quote “Yes, a murder, nothing more” from The Three Musketeers, focus on the philosophical concerns of the novel (See 107-116, 218-219, 229-230).

14. What elements does The Infatuations share with mystery or detective fiction? How is it not at all like those genres? What do you make of the long discursive digressions? Are they always relevant to the larger questions and investigations of the novel?

15. Javier tells María, when she asks “what happened” to Colonel Chabert: “What happened is the least of it. It’s a novel, and once you’ve finished a novel, what happened in it is of little importance and soon forgotten. What matters are the possibilities and ideas that the novel’s imaginary plot communicates to us and infuses us with, a plot that we recall far more vividly than real events and to which we pay far more attention” (227). Discuss this important statement in terms of your experience of this novel.

16. The entire story is transmitted through the perspective of María. Does this call into question her authority or her reliability? What is the effect of being inside a single consciousness throughout the novel? To what degree can the story be read as the projection onto a fictional world of the activity of a novelist’s mind, María standing in for Marías?

17. Miguel knew, says Javier, “that the fact we are here at all is entirely thanks to an improbable coming-together of various chance events, and when that coming-together ceases, we cannot really complain. . . . No one can complain about not having been born or not having been in the world before or not having always been in the world, so why should anyone complain about dying or not being in the world hereafter or not remaining in it forever?” (283). How does Miguel’s philosophy about the contingent nature of human life resonate through the whole novel? Is it an appealing perspective on life and death?

18. Once Javier agreed to do Miguel the favor of arranging his death, he says, “My mind had to start working and plotting like the mind of a criminal” (292). Does his explanation of the circumstances make Javier, in the mind of María, any less a murderer? Does she even believe that Miguel was ill? Discuss her statement “Everything that has been said to us resonates and lingers” (295).

When María sees Javier and Luisa in a restaurant, apparently now married, the novel comes full circle (326-331). She recalls the statement of the lawyer Derville in Colonel Chabert: “Far more crimes go unpunished than punished, not to speak of those we know nothing about or that remain hidden, for there must inevitably be more hidden crimes than crimes that are known about and recorded” (334). What do you think about the resolution of the plot, and María’s sense of the story’s ending?

Javier Marías was born in Madrid in 1951. The recipient of numerous prizes, including the International IMPAC Dublin Literary Award and the Prix Femina Étranger, he has written thirteen novels, three story collections, and nineteen works of collected articles and essays. His books have been translated into forty-three languages, in fifty-two countries, and have sold more than seven million copies throughout the world.
Learn More About The Infatuations
print

At Night We Walk in Circles
Daniel Alarcón

Mountains of the Moon
I. J. Kay

Your Fathers, Where Are They? And the Prophets, Do They Live Forever?
Dave Eggers

The Inspector and Silence
Hakan Nesser

To the Top of the Mountain
Arne Dahl

The Way of Sorrows
Jon Steele

The Last Six Million Seconds
John Burdett
Back to Top