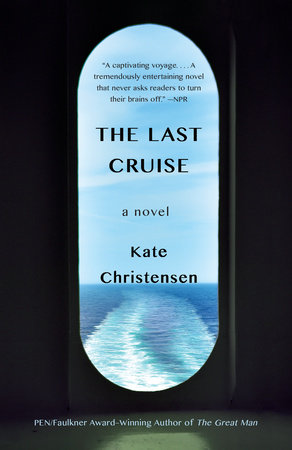 These discussion questions are designed to enhance your group’s discussion of The Last Cruise by Kate Christensen.

The 1950s vintage ocean liner Queen Isabella is making her final voyage before heading to the scrapyard. For the guests on board, among them Christine Thorne, a former journalist turned Maine farmer, it’s a chance to experience the bygone mid-twentieth century era of decadent luxury cruising, complete with fine dining, classic highballs, string quartets, and sophisticated jazz. Smoking is allowed but not cell phones–or children, for that matter. The Isabella sets sail from Long Beach, California into calm seas on a two-week retro cruise to Hawaii and back.  But this is the second decade of an uncertain new millennium, not the sunny, heedless ’50s, and certain disquieting signs of strife and malfunction above and below decks intrude on the festivities…

The 1950s ocean liner Queen Isabella is making her final voyage—a retro cruise from Long Beach to Hawaii and back—before heading to the scrapyard. For the guests on board, it’s a chance to experience a bygone era of decadent luxury, complete with fine dining, classic highballs, string quartets, and sophisticated jazz. Smoking is allowed but not cell phones—or children, for that matter. But this is the second decade of an uncertain new millennium, not the sunny, heedless mid-twentieth century, and certain disquieting signs of strife and malfunction above and below deck intrude on the festivities, throwing a trio of strangers together in an unexpected and startling test of character.

1. The narrative is told from the perspective of three characters: Mick, Christine, and Miriam. Do you feel that the three alternating points of view provided a full and accurate picture of the various socioeconomic layers aboard the ship? Which character resonated the most with you?

2. Christine and Valerie’s relationship is complicated, as female friendships often are. How do you think their relationship resolves itself in the end? Or does it?

3. Perhaps an even more complicated relationship is the one between Christine and Mick. While an obvious attraction develops between them, there are obstacles to their being together: Mick is crew and Christine is a passenger; he’s single and she’s married. Did you find a sense of resolution in their last scene together? Or were you hoping for more?

4. Did you find that your opinion of Mick changed over the course of the novel?  If so, how?

5. What did you think about Miriam’s ability to continue playing music with her ex-husband?  Do you think you would be able to work productively with a former spouse/partner?

6. Should Miriam and Sasha have kept their affair a secret?  Or did you find their openness and honesty admirable?

7. Discuss the role that food plays in the novel, and its significant shift from luxury to necessity.

8. Do you think the actions taken by the crew were justified or too extreme? How much responsibility do you think the management company, and specifically the billionaire owner onboard the ship, should bear for the series of events that unfold aboard the Queen Isabella?

9. The way the characters respond to the various crises aboard the ship says a lot about them. How would you have acted if you found yourself in a similar situation?

10. Like the ocean itself, this is a book of layers. On its surface, the book is grounded in a realist tradition. But below, there are deeper currents and meanings. What do you think about the central metaphor of The Last Cruise? Do you think the author intended it as an allegory?

11. Be sure to leave plenty of time for your group to discuss the ending of The Last Cruise, as it is the most controversial part of the novel. What were your thoughts about the ending? Did you find it too abrupt? Or just right? Did it provide a sense of resolution? Or did it leave you wanting more? Why do you think the author chose to end it this way?

Kate Christensen is the author of six prior novels, most recently The Astral, and the memoir Blue Plate Special. The Great Man won the 2008 PEN/Faulkner Award for Fiction. She has written reviews and essays for numerous publications, including The New York Times, Vogue, Elle, The Wall Street Journal, and Food & Wine. She lives with her husband in Portland, Maine. www.katechristensen.net
Learn More About The Last Cruise
print

How to Make an American Quilt
Whitney Otto

Meet Me in Scotland
Patience Griffin

Do This for Me
Eliza Kennedy

Waiting to Exhale
Terry McMillan
Back to Top