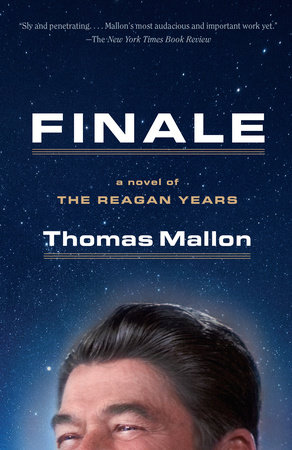 The questions, discussion topics, and reading list that follow are intended to enhance your reading group’s discussion of Finale: A Novel of the Reagan Years by Thomas Mallon. The book is the fictionalized account of the tumultuous administration of the most consequential and enigmatic president of modern times. Several figures—including a humbled, crafty Richard Nixon; a young, acerbic Christopher Hitchens; and an anxious Nancy Reagan—become the eyes through which readers see the last convulsions of the Cold War, the AIDS epidemic, a clash of ideologies, and a political revolution. At the center of it all is Reagan himself, whose genial remoteness confounds everyone.

Before there was Reagan the conservative icon, there was Reagan the president: genial, unknowable, faced with doubters, scandals, and the final throes of the Cold War. In this extraordinary novel, Thomas Mallon takes us to the tense, high-stakes months in 1986 when—with the Iran-Contra affair, the AIDS epidemic, and the Reykjavik summit with Gorbachev—Reagan and those around him were shaping history. We see Nancy Reagan—brooding, protective, consulting her astrologist at every turn. We see the young Christopher Hitchens—his incisive, acerbic voice lending a powerful counterpoint to events as they unfold. And we see Reagan himself: apparently warm but in fact distant and mercurial, by turns seeming to know more than he lets on and let on more than he knows. Written with impeccable language and savage wit, Finale is historical fiction of the highest order, brilliantly rendering the human drama behind these famous—and familiar—faces.

3. Is the novel, finally, about President Reagan? Does the subtitle (A Novel of the Reagan Years) suggest other intentions of the author?

4. Which characters are invented by the author and what do they add to the narrative of the novel? Are they foils to the other characters based on real people or invented to keep the story moving along or to add extra intrigue?

5. What do historical novels such as this add to our knowledge of history? And in the case of Finale, how does it add to recent American history and to your memories of the events and those months in 1986 if you lived through and remember them? What were you doing at the time? Were you following the news closely? Do you remember the Reykjavik Summit, the early days of AIDS, and the Iran-Contra Affair?

6. Newsday praised Mallon’s previous novel, Watergate:  “Like the best historical novelists, Mallon uses great public events as superstructure for classic themes of ambition and power, rivalry and envy, love lost and yearned for.” Do you believe Mallon is able to do the same with this novel? How? How does he makes those few momentous months come alive again?

7. What do you think are the difficulties and complications of writing about fairly recent historical events and figures, including some who are still alive?

8. Why do you think the author has chosen to use several different points of view instead of a single narrative perspective? Do you think this made the novel a more compelling story? What effect do the various viewpoints and voices have on your reading experience?

9. In Finale, how does Hollywood play into the actions and drama of Washington, D.C.?

10. Describe and compare the important players/voices in the book. Whom do you like the best and why? Do you trust them all? Why do you think Mallon has chosen this particular cast of characters instead of others?

11. Why do we not hear directly from President Reagan until the end?

12. Has the novel changed your view on any of the well-known historical figures? Nancy Reagan or Christopher Hitchens or Richard Nixon? How?

13. Describe the relationship between Gorbachev and Reagan, and between the aides of both men. Does one really come out of the summit ahead of the other?

14. What role does former president Nixon play in the novel? Do you view him differently after reading this book than you did previously? How? Did you read Thomas Mallon’s Watergate? Do you think this is the natural successor to that book?

15. Pick one of the main political issues/topics of the book and discuss as a group. The Cold War, Margaret Thatcher and Ronald Reagan’s public friendship, the Iran-Contra Affair, the AIDS epidemic.

16. Have you read anything by Christopher Hitchens (books, Vanity Fair articles, etc.)? What do you think of the portrayal of him here? What does he add to the narrative? How does he evolve, or does he, over the course of the novel?

17.  What about Pamela Harriman? She adds to the comic side of the novel. What are her motivations and do they change during the novel? How has her past shaped the way she is and her goals for the future?

18. There are also a number of humorous passages between Nancy Reagan and Merv Griffin. What propels Nancy forward? Describe her relationship with the president and compare it to his relationships with his children.

19. Even though you know the outcomes of the Reykjavik Summit and other news in the book (or you can look them up), were you surprised by the plot’s complications and the ending?

20. How has the novel broadened your view of the period and the events of 1986?

21. What are the main conflicts or points of intrigue in the novel?

22. Describe the Nick Carrollton–Anders Little plotline in Finale. Why does Mallon invent them and tell their story in the context of political events in 1986?

23. What role does Anne Macmurray play? Do you sympathize with her? She also appears in an older Mallon novel, Dewey Defeats Truman, as one of the main characters. Why do you think Mallon has brought her back to this novel? How to do feel about what happens to her and her ex-husband (her suitor in the earlier novel), Peter Cox? Do you think Mallon will write about her again?

24. If you could ask Thomas Mallon a question, what would it be?

Thomas Mallon is the author of nine novels, including Henry and Clara, Dewey Defeats Truman, Fellow Travelers, and Watergate. He is a frequent contributor to The New Yorker and The New York Times Book Review, and in 2011 he received the American Academy of Arts and Letters’ Harold D. Vursell Memorial Award for prose style. He has been the literary editor of GQ and the deputy chairman of the National Endowment for the Humanities. He lives in Washington, D.C.
Learn More About Finale
print

The Story of Zahra
Hanan al-Shaykh

The Woman on the Stairs
Bernhard Schlink

Once A Spy
Keith Thomson

Journey Into the Past
Stefan Zweig

Death by His Grace
Kwei Quartey