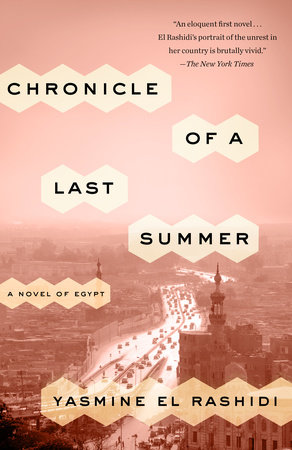 In order to provide the most informed and thought-provoking questions possible, it is necessary to reveal important aspects of the plot of this novel—as well as the ending. If you have not finished reading CHRONICLE OF A LAST SUMMER, we respectfully suggest that you may want to wait before reviewing this guide.

1. What did you know about life in Cairo before reading Chronicle of a Last Summer?  How did those impressions change or grow after your reading?

2. Why do you think the author chose to zero in on three different Cairo summers as the novel’s setting? How did this affect your impression of the narrator? What about your impressions of Cairo, and of Egypt’s political climate?

3. What surprised you about the narrator’s daily life in Egypt? What seemed normal or similar to your own life? What was radically different?

4. The house that the narrator grew up in exerts a heavy presence in the story. Why do you think this is? How are her feelings about the house different or the same as how you feel about the home you grew up in?

5. There are many colorful characters in Chronicle of a Last Summer: from family members such as the narrator’s reticent mother, mostly absent father, and rebellious cousin Dido, to tertiary characters such as the fruit seller who is snatched from the street and the housekeeper who is kept away by rebel activity in her neighborhood. Which character or characters most hooked your imagination and why?

7. Why do you think the narrator chooses to pursue film in school? How does her choice of film subjects reflect or interact with Egypt’s political climate?

9. In the beginning, the narrator talks about a game she plays in the car on the way to school in which she tries to identify every object that stays the same or changes from day to day. How does this game represent the greater theme of constancy versus change in the novel? Why is this an important theme for Egypt as a whole?

10. Absence is an important aspect of the narrator’s life, and the novel as a whole. Baba’s absence, for example, is very prominent for much of the story. Who else is noticeably absent or made absent during the course of the story? How else does absence appear throughout the novel? And why do you think the author chose to emphasize it so?