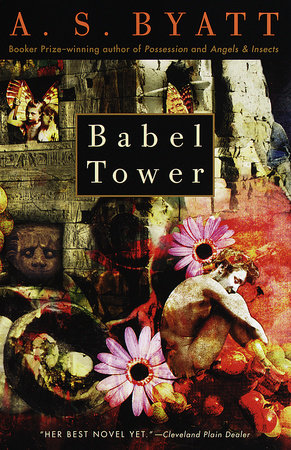 The questions, discussion topics, author biography, and suggestions for further reading that follow are designed to enhance your group’s reading of A. S. Byatt’s Babel Tower, a thought-provoking, deeply intelligent novel of ideas.

It is 1964, and Frederica, a fiercely intellectual young woman, realizes that her marriage has become a prison. Her husband, Nigel Reiver, is determinedly philistine, resentful of her brain and her interests outside the home; Frederica’s slightest efforts at independence provoke him to increasingly violent behavior. Eventually she must flee from their home in the middle of the night, taking their young son, Leo, with her. Frederica moves to London, begins a teaching job, and files for divorce. Interwoven with this story is a parallel one, Babbletower, a fable about an idealistic group of men and women who left Paris during the Terror to found a utopian community in the countryside. But in isolation from the larger society, Culvert, the group’s leader, becomes more and more tyrannical in his program of pushing "freedom" to ever newer and more frightening limits.

The novel reaches its climax with two trials that mirror the upheavals of the day: Frederica’s bitter, public divorce and the prosecution of Babbletower’s author and publisher on obscenity charges. In her fascinating and complex narrative, Byatt raises a seemingly infinite number of questions: about language and thought, freedom and captivity, the romantic point of view, and the condition of women. She reminds us that there are no absolute answers; life consists of a series of complex and reverberating choices.

1. Frederica’s sister, Stephanie, died in a freak accident not long before the beginning of the novel’s action. What effect has Stephanie’s death had upon Frederica and the life decisions she makes? Why is Daniel’s reaction to his wife’s death so extreme? How have Stephanie’s parents, and her children, been changed by her death?

2. In the first chapter, Daniel, a clergyman, speaks on the church hotline with a woman who has abandoned her children. What other images of abandoned children can you find in the novel? If Leo had not followed Frederica away from Bran House, do you think she would have left him behind for good, and if so, would it have counted as abandonment? What about the mothers at La Tour Bruyarde: in allowing their children’s welfare to be decided by Culvert, did they fail in their duty as parents?

3. Do you find that Frederica places too much blame for the state of her marriage upon herself? In your opinion, does she behave passively when dealing with Nigel? If so, do you think that such behavior is a product of her time and generation? Might a modern, more "liberated" woman behave differently?

4. Do you feel any sympathy at all for Nigel, or is he presented as an absolute villain? What attractive characteristics drew Frederica to him in the first place? Do you see Nigel as a comment on the "type" of the Romantic hero–Heathcliff or Byron? If you do, what point do you think Byatt is making about such heroes?

5. Why has Byatt chosen the 1960s as the setting for this novel? Rupert Parrott describes the climate of that time as "a period of moral ferment, moral realignment, fruitful chaos" [p. 149]. What particular events of the 1960s contributed to this sense of moral ferment? In what ways do the times described in the novel resemble, or differ from, the 1990s?

6. Babel Tower makes extensive comments upon Romanticism and the romantic outlook on life. Can you infer Byatt’s own views? What flaws does she find in the romantic ethos? Why are there so many references, both overt and obscure, to William Blake? Do you feel that Byatt deals with Blake in a positive, hostile, or satiric manner?

7. In what ways do the attitudes prevalent at the Tour Bruyarde parallel those of London in the sixties? "The social structures of the Society [the French utopians] had fled…were structures of authority, of persecution, of narrow loyalties, of hierarchy, of exclusive and narrow affections and privileges, all of which led to oppression, irrationality and the sense of private property and personal greed" [p. 204]. Is this point of view comparable to "progressive" thinking in the 1960s?

8. While living and teaching in London, Frederica becomes deeply wrapped up in the novels of E. M. Forster and D. H. Lawrence. If you are familiar with these authors’ work, particularly Lawrence’s Women in Love and Forster’s Howards End, can you explain why Frederica found these authors’ concerns so germane to her own life? If you are familiar with Thomas Hardy, can you understand why Jude Mason has named himself after the hero of Hardy’s Jude the Obscure?

9. One of the questions posed by Babel Tower concerns the nature of freedom and of captivity. When are Frederica and the Lady Roseacre the most "free"? What qualities must they possess, and exercise, in order to achieve freedom? In this novel, does freedom seem harder for women to achieve than for men, and if so, why?

10. The Romantic period, like the 1960s, was a time when "natural" behavior, and life, was assumed to be good. The Babbletower narrative takes a dissenting view; Jude demonstrates "that if we are free to follow our passions, who can prevent us from following our desire to hurt others, to kill, to rape, to torture? These are–human passions; they are natural" [p. 545]. How is this theme played out in the modern portion of Babel Tower? What conclusions, if any, are drawn?

11. Frederica is fearful and suspicious of groups and group life: "I was no good at group life," she says to Agatha. "I hated school." What is it in her nature, or her experience, that has formed this dislike? Does Byatt imply that such feelings are characteristic of intellectuals and artists in general? What points do the two narratives–the 1960s story and Jude Mason’s Babbletower–make about the nature of group versus individual life?

12. A number of the characters in Babbletower, from Bill Potter to Culvert, and especially the members of the royal commission, have strong feelings about education and the nature of learning. Whose ideas do you find the most convincing? Whose the least so? What type of person might the William Blake Primary School produce? What about the Swineburn School?

13. What relevance do the four reader’s reports Frederica writes for Rupert Parrott’s firm [pp. 151-56] have to Frederica’s own life, and to the themes addressed in the novel itself?

14. The latter portion of Babel Tower contains large verbatim quotations from the two trials, Frederica’s and Jude’s. Reflecting on the way the legal experts distorted the truths of their lives, Frederica "sees herself as a caged or netted beast…. The net is made by words which do not describe what she feels is happening" [p. 326]. Is language by its very nature inadequate, or is its inadequacy the fault of people who manipulate it to achieve their own ends? What is the myth of the Tower of Babel, and why has Byatt chosen it as a metaphor–and a title–for her novel?

15. "I feel I’m on trial for reading books," Frederica says [p. 502]. Why are so many people in Frederica’s world–Nigel, his family, even the lawyers and jury members during her trial–apparently threatened by intellectuals, particularly intellectual women? What separate aspects of British culture and society do the two principal families, the Reivers and the Potters, represent?

16. Frederica finds herself questioning "the Romantic desire for everything to be One–lovers, body and mind, life and work" [p. 361]. Does she conclude that the ideal of oneness is realizable or even desirable? How do the identical twins, John and Paul Ottokar, illustrate the ideas of oneness and separateness? What other images of oneness does Byatt invoke?

17. "The Church has always been about sex," says Canon Holly [p. 26], and later, "The Christian religion is an expression of the perception that what we now call sado-masochism is a central truth of our existence" [p. 555]. What does he mean by these statements? Do you find them credible?

Babel Tower is the third of a planned tetralogy about the Potter family; the two earlier volumes were The Virgin in the Garden and Still Life. Byatt is the author of two collections of stories, Sugar and Other Stories and The Matisse Stories, two other novels, Shadow of a Sun and Possession, a spectacularly successful work that won the 1990 Booker Prize and the Irish Times/Aer Lingus International Fiction Prize and reached a large international readership. The Djinn in the Nightingale’s Eye, two novellas, will be published in November 1997.
Learn More About Babel Tower
print

Fury
Back to Top