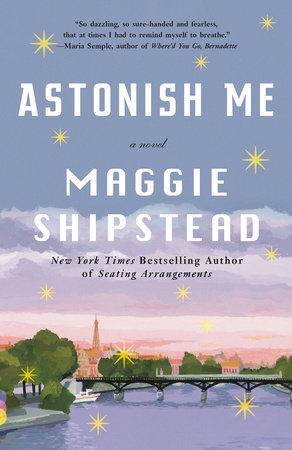 The questions, discussion topics, and reading list that follow are intended to enhance your reading group’s discussion of Astonish Me, Maggie Shipstead’s first novel since her award-winning, national best-selling debut, Seating Arrangements.

From the author of the widely acclaimed debut novel Seating Arrangements, winner of the Dylan Thomas Prize and the Los Angeles Times Book Prize for First Fiction: a gorgeously written, fiercely compelling glimpse into the passionate, political world of professional ballet and its magnetic hold over two generations.

Astonish Me is the irresistible story of Joan, a ballerina whose life has been shaped by her relationship with the world-famous dancer Arslan Rusakov, whom she helps defect from the Soviet Union to the United States. While Arslan’s career takes off in New York, Joan’s slowly declines, ending when she becomes pregnant and decides to marry her longtime admirer, a PhD student named Jacob. As the years pass, Joan settles into her new life in California, teaching dance and watching her son, Harry, become a ballet prodigy himself. But when Harry’s success brings him into close contact with Arslan, explosive secrets are revealed that shatter the delicate balance Joan has struck between her past and present.

In graceful, inimitable prose, Shipstead draws us into an extraordinary world and into the lives of her vivid and tempestuous characters. Filled with intrigue, brilliant satire, and emotional nuance, Astonish Me is a superlative follow-up to Shipstead’s superb debut.

1. What does “Astonish me” mean, as a metaphor in the novel?

2. Who is the main character? Is that person also the hero?

3. Shipstead skips forward and backward in time throughout the novel. How does she use these leaps to fill in the story?

4. “Elaine ingests a steady but restricted diet of cocaine without apparent consequence. The key, she has said to Joan, is control. Control is the key to everything.” (page 8) What does Elaine mean by “control”? Which characters in the novel lose control, and to what effect?

5. Jacob wants to live “an intentional life” but doesn’t really know what he intends. The dancers have been taught that “going through the motions” is preferable (page 42). What role does intent really play in their lives? How does this connect to the notion of control?

6. And how does the perfectionism required of ballet dancers play into intent and control?

7. On page 54, Jacob tells Joan, “Every family has a mythology.” What is his mythology for their family? How does Joan’s secret endanger it?

8. Is Joan’s aggressive pursuit of Arslan out of character for her? Why does she do it?

9. Throughout the novel, characters wonder why Arslan chose Joan to help him defect. Why do you think he chose her?

10. How does Sandy shape her daughter’s future? What effect does her behavior at Disneyland have?

11. “I think things can be true even if they didn’t really happen,” Jacob says on page 144. What does he mean by this? How does it play out in his family’s life?

12. When Joan says to Chloe, “Ballet isn’t about you” (page 180), what does she mean? If ballet requires losing oneself, how does it also lead to selfish behavior off-stage?

13. Jacob adored Joan from childhood; Harry adored Chloe from childhood. How else does the younger generation resemble the older one? How do they differ?

14. Why do Harry’s feelings for Chloe change?

15. Discuss the roles of nature vs. nurture. Which is more important in Harry’s life? What about for Chloe?

16. What does “parent” mean, in terms of the novel? Which characters make good parents?

17. What is the metaphor of Emma Livry, the ballet dancer whose tutu catches fire?

18. Shipstead shows us how Jacob reacts to Ludmilla’s phone call, but we don’t see Harry’s reaction. How do you imagine it went?

19. What does Rodina, the title of Arslan and Chloe’s ballet, mean? (In Russia, it refers to “motherland.”)

20. Do you think Jacob decides to stay through the end of the performance?

21. What do we learn from section V? How does it affect your understanding of the novel?

Maggie Shipstead is a graduate of the Iowa Writers’ Workshop and a former Wallace Stegner Fellow at Stanford University. Her first novel, Seating Arrangements, was a New York Timesbest seller, a finalist for the Flaherty-Dunnan First Novel Prize, and the winner of the Dylan Thomas Prize and the Los Angeles Times Book Prize for First Fiction.
Learn More About Astonish Me
print

Recipe for a Perfect Wife

The Music Shop
Back to Top