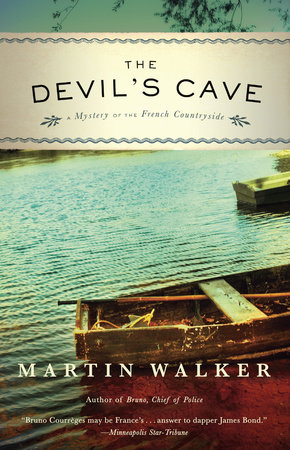 The introduction, discussion questions, and suggested further reading that follow are designed to enhance your group’s discussion of The Devil’s Cave, the fifth novel in Martin Walker’s acclaimed Bruno series.

In Martin Walker’s thrilling new novel, intrepid Chief of Police Bruno Courrèges finds himself confronted by a series of crimes and shady real estate schemes that baffle him, threaten the community he serves, and lead to a terrifying encounter in the Devil’s Cave.

The novel is set in the fictional small town of St. Denis, France, along the Dordogne River, a beautiful region renowned for its cuisine and its many prehistoric caves. It’s a relaxed, tight-knit community, but its peace is broken when Bruno is called away from listening to a choir practice by the news that a dead woman has been seen drifting down the river naked in a boat. When she’s pulled ashore, it’s not clear if her death was a suicide or homicide, but there is some evidence that she’s been the victim of a Satanist ritual. The bizarre details—the presence of black candles, an empty vodka bottle, and a pentagram drawn on the woman’s body—quickly become headlines, creating just the kind of media storm the mayor of wants to avoid. He has thrown his support behind a development project that would bring to St. Denis a high-end resort and a sports complex that would create an economic boom for the area.

Meanwhile, Bruno must deal with several other problems—a complaint of wife beating against the farmer Louis Junot and a rising tide of suspicion about the real estate plans. During one of his daily rides on his horse Hector, Bruno encounters the beautiful Eugénie, who is involved, with her partner, Foucher, in the development project, and serves as a nurse to the bedridden Red Countess—an aristocratic Communist and heroine of the French Resistance.

The plot thickens when a goat’s head and more black candles are discovered in the Devil’s Cave and Bruno learns that a neighboring town had been cheated in a real estate deal very similar to the one proposed for St. Denis. When Junot is killed in a suspicious accident, Bruno fears he may have two murders on his hands. And the more he learns about the resort project, the more he worries that St. Denis is about to be swindled. But how are all these threads connected? As the novel races to its dramatic conclusion, Bruno is drawn into the depths of the cave and a terrifying confrontation in an attempt to save a young woman’s life—a confrontation that forces Bruno to draw on all his courage, military training, and self-discipline.

What makes The Devil’s Cave so enjoyable and so distinctive is that its hero, Chief of Police Bruno Courrèges, is so unlike many protagonists of recent detective novels. He is not an alcoholic loner, or at odds with his family, or detached from his community. On the contrary, Bruno is deeply involved with the life of St. Denis—he coaches the boys’ rugby team and is known by everyone. Moreover, he is eminently sane, healthy, wise. He’s a shrewd and brilliantly observant police chief, but he’s far from cynical. He likes solutions where everybody seems to win. When the drunken farmer Junot attacks him, Courrèges knocks him down, as any good police officer would, but then helps the man get his tractor started, an act as surprising as it is admirable. Bruno is also a food lover and an accomplished cook. The novel’s frequent, elaborate descriptions of the splendid meals he prepares may make readers want to sign up for French cooking lessons. Indeed, the many passages about daily life in St. Denis and Bruno’s personal life—his horse and dog, his romantic relationships, his involvement in the local politics of the town—all create a marvelously rich portrait of the community Bruno serves and which in turn sustains him.

1. What makes Bruno such a likable protagonist? What are his most appealing qualities? What attributes help make him such a good detective? In what sense is Bruno a hero?

2. Early in the novel, Father Sentout, worried that the dead woman found in a boat has been the victim of a Satanism, asserts “They are forever at war within us, God and Satan, and our souls are never in greater danger than when we forget that” [p. 72]. Does the novel bear out his belief in this inner conflict between good and evil? Or are the crimes the novel explores simply a matter of greed and lust, which can be explained in purely secular terms?

3. After Junot’s suspicious death, Bruno acknowledges that “If he had a murder, or even two, he had no obvious motive for either one. He had some proof and plenty of suspects but no chain of logic to bind them together into any kind of coherent explanation for the deaths of Athénaïs and Junot, let alone connect them” [p. 256]. How does Bruno get from this state of almost total bafflement to solving the murders? What is the chain of logic that connects the murders?

4. Though The Devil’s Cave is at times a fast-paced thriller, it frequently slows down and luxuriates in the details of daily life in the small town of St. Denis. What do the many passages about cooking, horses, basset hounds, and so on, as well as Bruno’s romantic life, add to the novel?

5. How is Bruno regarded by the community of St. Denis he serves? How does he regard his role in that community?

6. When Bruno confronts Junot about the claim of wifebeating, Junot attacks him. Most policemen or detectives would have hauled Junot off to jail immediately. Instead, Bruno helps him get his tractor started. What does this encounter reveal about Bruno?

7. The theme of violence against women runs throughout the novel. What forms of ill treatment and exploitation of women does the novel explore?

8. When Bruno first encounters Eugénie, he observes that some would have thought her beautiful, with her perfect features and ivory complexion. “But there was a lack of animation or perhaps too much self-control in her face,” he says [p. 51]. What else does Bruno notice about Eugénie that makes him wary of her? How do Bruno’s very subtle powers of observation serve him as a detective?

9. Why does Isabelle choose not to stay in St. Denis and make a life with Bruno? Why is Bruno unwilling to go to Paris to be with her? Would Bruno be a less appealing character if he were married?

10. When Bruno realizes he can use the photographer Delaron for his own purposes—to get the newspaper to investigate the links between the vacation village and  Gaston Lemontin’s file on Thivion—he reflects that he likes “solutions where everyone seemed to win” [p. 156]. What does this passage reveal about Bruno’s motivations and overriding concerns? Is he able to find “solutions where everyone seemed to win” in The Devil’s Cave?

11. In what ways does Bruno’s army training help him in the final, explosive encounter in the Devil’s Cave? Why does he fight so hard to save the count’s life?

12. Bruno doesn’t rely on DNA and other forms of forensic evidence to solve crimes, as so many modern police forces and detectives do. What does he rely upon instead?

13. The criminals in The Devil’s Cave are motivated by the age-old desires for money and power, but in what ways is the novel a reflection of our own unique historical moment? What role do real estate scams, shady investment firms, pornography, tourism, and media manipulation play in the novel?

14. A character like the Red Countess, an aristocratic Communist who was a courier in the French Resistance, could exist only in France. In what other ways is The Devil’s Cave a distinctly French novel? How does it differ from popular American or Swedish mysteries?

15. Martin Walker is also a journalist who writes a weekly column, “Walker’s World,” on international affairs. In what ways is The Devil’s Cave not only a highly enjoyable detective novel but also a serious commentary on our time?

Martin Walker is senior director of the Global Business Policy Council, a private think tank for CEOs of major corporations, based in Washington, D.C. He is also editor in chief emeritus and an international affairs columnist at United Press International. His four novels in the Bruno series are Bruno, Chief of Police; The Dark Vineyard; Black Diamond; and The Crowded Grave. He lives in Washington, D.C., and the Dordogne.
Learn More About The Devil’s Cave
print

The Secrets of the Bastide Blanche
M. L. Longworth

The Mystery of the Lost Cezanne
M. L. Longworth

Speaking from Among the Bones
Alan Bradley

The Weed That Strings the Hangman’s Bag
Alan Bradley

The Shape of Water
Andrea Camilleri

I Am Half-Sick of Shadows
Alan Bradley

The Grave’s a Fine and Private Place
Alan Bradley

The Dead in Their Vaulted Arches
Alan Bradley