The Wolves of Midwinter Reader’s Guide 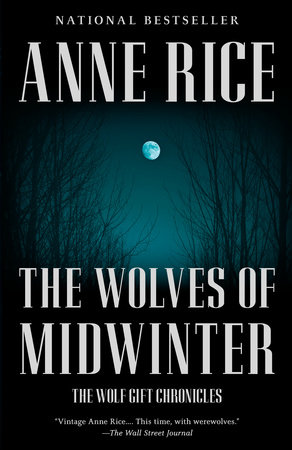 The Wolves of Midwinter Reader’s Guide

In The Wolves of Midwinter, Anne Rice revisits the world she brought brilliantly to life in The Wolf Gift. The questions, topics for discussion, and suggestions for further reading that follow are designed to enhance your group’s journey to the rugged coastline of northern California and into the lives of creatures and spirits who inhabit the supernatural realm.

Reuben Golding, the Man Wolf introduced in The Wolf Gift, has settled on Nideck Point with his Morphenkind family and is looking forward to the Midwinter celebrations planned by his mentor, Felix, and the other Morphenkinder for the local villagers. Reuben keeps in touch with the people he left behind in San Francisco: his beloved father, Phil, a poet and academic; his mother Grace, a renowned surgeon; and his brother Jim, a compassionate and inwardly troubled Catholic priest. Celeste, his estranged girlfriend, surprises him with the announcement that she is pregnant and wants him to raise their child, a prospect Reuben finds at once thrilling and daunting.

As preparations for the celebrations proceed, a host of intriguing characters appears at Nideck Point. The lovely Marchent, who was killed in the first book, returns as a restless ghost; magical woodland spirits, known to the Morphenkinder as The Forest Gentry, come out of hiding to participate in the Christmas parties; and strange new servants arrive to put the house in tip-top shape and prepare luscious feasts for the many invited guests.  The fete for the villagers is only part of Felix’s Yuletide plans. On Christmas Eve, the Morphenkinder gather to perform ancient pagan rituals at a midnight bonfire. Lust-filled and wild, the event ends up drawing some unexpected and not wholly welcome guests.

Exploring the deep corners of Rice’s richly imagined netherworld and the ties of friendship and family, The Wolves of Midwinter illuminates timeless questions of good and evil, death and immortality, and the links between sacred rites across the centuries.

1. In describing Reuben’s reaction when he learns Laura has taken the Chrism, Rice writes, ” He felt an immediate arousal. He wanted her again, and yet he felt, what, sick? Was he sick with fear? He hated himself” (p. 9).   What do Reuben’s mixed emotions reflect about his feeling about his own transformation? What part do his feelings as Laura’s lover play in his discomfort with her decision?

2. Why is Laura more accepting of the “wolf gift” than Reuben is? Do her past encounters with tragedy and death validate her desire for immortality (p. 11)? Are the other reasons for her eagerness to become a Morphenkinder persuasive (p. 18)?

3. Felix argues that “Traditions are seldom lies; traditions reflect people’s deepest beliefs and customs. They have their own truths…” (p. 22).  What family, community, or religious traditions embody or reinforce your personal beliefs?   Do you share Reuben’s ambivalence about Christmas celebrations today (pp. 30; 34)?

4. Are Celeste’s anger about her pregnancy and her decision to let Reuben raise their child understandable (p. 67-69)? To what extent are both Celeste and Reuben motivated by selfishness? How does the prospect of fatherhood affect Reuben? Do you think he appreciates the full implications of being a father to “natural child” (p. 69)? Does the arrangement they make seem right and appropriate to you (pp. 120-122)?

5. What intellectual and emotional responses does the appearance of Marchent’s ghost arouse in Reuben and Felix? Is Elthram’s description of the “newly dead” comparable to accounts you have read about near-death experiences (p. 161)? What does his explanation of the transition from the earthbound state to the realm of spirits and ghosts provide for both Reuben and the reader (pp. 162; 167)?

6. What light does the destruction of the brothel in the South American jungle shed on the uncertainties Reuben faces (pp. 177-181)?  What are the moral implications of his conclusion that “The scent of evil does not make us what we are, and once we are beasts we kill like beasts, and we have only the human part of us, the fallible human part to guide us” (p. 181)?

7. What do Jim’s struggles with guilt and regrets illustrate about the power of faith and the belief in God?  In what ways do his beliefs and his training as a priest affect his abilities and inclination to support Reuben (see, for example, p. 118)? Is Jim guilty of betraying his moral and religious principles when he tells Reuben about thugs wreaking havoc in his parish, knowing what actions his brother will take  (pp. 335-337)?

8. Why do you think Rice chose to make one of Reuben’s parents a poet and the other a scientist? How do Phil’s interests and special qualities reflect or mimic aspects of the “wolf gift”? Does his relationship with Reuben and the Morphenkinder evolve in a believable and satisfying way?

10. As they make love, Reuben quotes the Genesis, whispering “Laura, bone of my bone, flesh of my flesh”; Laura answers, “My beloved Reuben, wither thou goest, I will go and where thou lodgest, I will lodge,” and Rueben continues to quote from The Book of Ruth, saying “And I with thee…. And thy people shall be my people” (p. 273).  Why does Rice turn to these familiar Biblical quotations immediately following the sexually graphic (almost pornographic) description of Reuben reaction to Laura’s naked body (p. 272)?

11. The festivities in The Wolves of Midwinter involve both pagan rituals and the Christian celebration of Christmas. What similarities are there between such seemingly disparate traditions? What do they reflect about the relationship between humans and the natural world?  About the spiritual needs at the heart of community and religious gatherings? How does the story of Christ relate to and reaffirm the mysteries, hopes, and fears experienced in the pre-Christians world?

12. The Wolves of Midwinter is deeply concerned with what it means to be immortal. Compare the points of view expressed by Reuben (p. 16), Laura (p. 18); Felix (p. 77); and Margon (p. 94-5). What accounts for their differing perspectives? Based on the characters in the novel– including the Distinguished Gentleman, the “new” Morphenkinder Reuben, Stuart, and Laura, and the Forest Gentry-discuss whether immortality is a gift or a burden.  Does the idea of living forever appeal to you? Why or why not?

13. Rice has called Reuben “a comic book hero, living a double-life as a reporter and a man wolf”(Amazon.com Review). What parallels do you see between the adventures of Reuben and Superman (aka reporter Clark Kent)? What particular events in the novel bring out the poignancy-and the humor-of the hero’s need to keep his identity secret?

14. In addition to Morphenkinder presented in The Wolf Gift, The Wolves of Midwinter introduces other preternatural beings-ghosts and spirits; the Forest Gentry; another, less benevolent pack of Morphenkinder. How do these new characters expand on and enrich the imaginary world Rice created in the first book?  Which character or group would you like to see further developed in the next book in the series?

15. If you are familiar with Rice’s Vampire Chronicles, discuss the differences between the immortal Vampires and Morphenkinder. Are the characters in one saga easier to like or identify with?

Anne Rice is the author of 32 books, including The Wolf Gift, Interview with a Vampire, The Vampire Lestat, The Lives of the Mayfair Witches, and The Songs of Seraphim. She lives in Palm Desert, California.

The Pillars of the World
Anne Bishop

All Together Dead
Charlaine Harris

The Case of the Spellbound Child
Mercedes Lackey

Gameboard of the Gods
Richelle Mead

From Dead to Worse
Charlaine Harris

Dead in the Family
Charlaine Harris