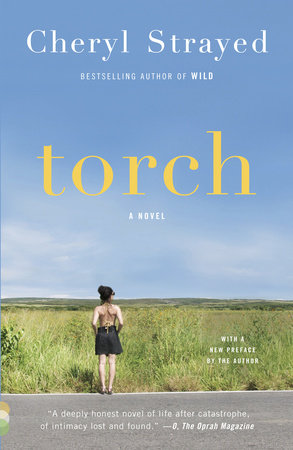 The introduction, questions, and suggested further reading that follow are designed to enhance your group’s discussion of Cheryl Strayed’s Torch.

“The doctor didn’t say cancer—at least she didn’t hear him say it. She heard him say oranges and peas and radishes and ovaries and lungs and liver.” So begins Torch, the story of thirty-eight-year-old Teresa Rae Wood, an exuberant radio personality in her small Minnesota town, and the bewildered family she suddenly leaves behind—her two nearly grown but still rebellious children, Claire and Joshua, and her common-law husband, Bruce. With a deep appreciation for the complexities of love and the shifting rhythms of grief, Cheryl Strayed offers a finely wrought tale of uncommon candor, wisdom, and power.

“A deeply honest novel of life after catastrophe, of intimacy lost and found.” —O, The Oprah Magazine

“Beautifully written and authentic in its portrayal of the unexpected fallout a family death can engender.” —People

1. Torch has been compared to Joan Didion’s memoir The Year of Magical Thinking. Have you read other fiction or nonfiction works that share the themes of Torch? What are the challenges of dealing with issues of grief in fiction? In nonfiction?

2. The novel takes place in Midden, Minnesota, a fictional small midwestern town. How does the setting of the novel inform the characters and their actions? Would you agree that the town serves as a character in the novel and if so, how?

3. Teresa is the host of a local radio show called Modern Pioneers. In what ways does this show reflect her personality and her family? How does the radio show affect the characters throughout the course of the novel?

4. Teresa flees a bad marriage and has a long, loving relationship with Bruce in which she believes she is setting a good example for her children. What is your opinion of Bruce as a husband and father?

5. Teresa’s children, Claire and Joshua, have a good but sometimes strained relationship with their mother at the start of the novel. How does their relationship change when they learn Teresa has cancer?

6. Explore the reactions of Bruce, Claire, and Joshua to Teresa’s diagnosis. How did you feel about their actions? Are they typical of someone facing tragedy or misfortune? How would you act if you found yourself in the same situation?

7. In the hospital, Claire and Bruce meet the grief counselor Pepper Jones-Kachinsky, who preaches strength through faith. How is Claire’s response to Pepper different from that of Bruce? What role does faith play in the novel and in your own life?

8. Teresa’s death prompts each of the main characters to choose a new path for themselves. Bruce takes the most dramatic step, while Claire and Joshua struggle in their sibling relationship and in their romantic relationships. How is their decision-making complicated by Teresa’s absence from their lives?

10. Cheryl Strayed writes of Claire, “She came to see that her grief did not have an end, or if it did, she would not be delivered there. Grief was not a road or a river or a sea but a world, and she would have to live there now.” How does this statement coincide with or differ from your own thoughts on grieving? Did you identify with the thoughts and actions of Bruce, Joshua, or Claire?

11. Although Torch is about the death of a loved one, it is also a story of a family confronting their grief and trying to heal. How would you describe the overall tone of the novel?

12. The novel begins with an epigraph from Jane Eyre: “Yet it would be your duty to bear it, if you could not avoid it: it is weak and silly to say you cannot bear what it is your fate to be required to bear.” Do the characters believe in fate and its effect on their lives? What is your view on fate in your own life?

Cheryl Strayed is the author of Wild: From Losot to Found on the Pacific Crest Trail and Tiny Beautiful Things: Advice on Love and Life from Dear Sugar. Her stories and essays have appeared in numerous magazines and journals, including The New York Times Magazine, The Washington Post Magazine, Vogue, The Rumpus, Self, The Missouri Review, The Sun, and The Best American Essays. She lives in Portland, Oregon.

All We Ever Wanted Was Everything
Back to Top