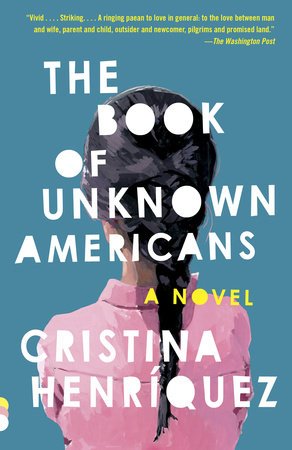 The questions, discussion topics, and other material that follow are intended to enhance your group’s conversation about Cristina Henríquez’s The Book of Unknown Americans, a powerfully honest, unforgettable story of two families, brought together by love and tragedy, each struggling to find their place in a new country.

Arturo and Alma Rivera have lived their whole lives in Mexico. One day, their beautiful fifteen-year-old daughter, Maribel, sustains a terrible injury, one that casts doubt on whether she’ll ever be the same. And so, leaving all they have behind, the Riveras come to America with a single dream: that in this country of great opportunity and resources, Maribel can get better.

When Mayor Toro, whose family is from Panama, sees Maribel in a Dollar Tree store, it is love at first sight. It’s also the beginning of a friendship between the Rivera and Toro families, whose web of guilt and love and responsibility is at this novel’s core.

Woven into their stories are the testimonials of men and women who have come to the United States from all over Latin America. Their journeys and their voices will inspire you, surprise you, and break your heart.

Suspenseful, wry and immediate, rich in spirit and humanity, The Book of Unknown Americans is a work of rare force and originality that offers a resonant new definition of what it means to be an American.

1. How does Alma’s perspective in the novel’s first chapter illustrate her and her family’s hopes for their new life in America? Take another look at her statement after the trip to the gas station: “The three of us started toward the road, doubling back in the direction from which we had come, heading toward home” (11). What are the meanings of “home” here, and how does this scene show how America meets and differs from the Riveras’ expectations of it?

2. Mayor describes how he’s bullied at school and his general feelings of not fitting in. How do you think this draws him to Maribel? What do they have in common that perhaps those around them, including their parents, cannot see on the surface?

3. How is the scene where the Riveras sit down for a dinner of oatmeal a turning point for the family and for the book? Discuss the role of food in the novel, especially how it evokes memories of home and establishes a sense of community. Are there any other cultural values or traditions that do the same thing?

4. What are some key differences in the way that the women in the novel respond to challenges of assimilation compared to the men? How does Alma’s point of view highlight these differences?

5. What brings Alma and Celia together as neighbors and friends, and how does their relationship change by the end of the book?

6. What are some of the signs throughout the novel that Maribel is getting better? Consider the scene in the pizza restaurant in particular, and her response to Alma’s joke. How does laughter here, and in other places in the book, evoke feelings of nostalgia and change?

7. How does Alma’s lingering guilt about Maribel’s accident affect her choices and interactions when she’s in America? Do you think that she still feels this way by the end of the book? What does she have to do, and realize within herself, to move beyond her feelings?

8. Do other characters besides Alma struggle with guilt? How does this emotion echo throughout the book, even among the varying narrators/voices?

9. How would you describe the atmosphere of the impromptu Christmas party in the Toros’ apartment (p. 137)? What brings the residents of the building together, as a group and in more intimate settings? Why do you think Cristina Henríquez brought all the characters together during this particular holiday?

10. Discuss Quisqueya’s role in what happens to Mayor and Maribel. Without her intervention, how might have their relationship, and ultimately the novel, ended differently?

11. How does Garrett cast a threatening shadow over several characters’ thoughts and actions? Did your opinion of him change after you learned about his home environment? How much blame can, or did, you ascribe to him for what happens to Arturo?

12. How does the Toros’ buying a car influence the course of events in the novel? What does the car mean for Rafael and Mayor individually and for their father-son relationship?

13. Was Alma’s decision to return to Mexico with Maribel the best one? Were there alternatives, or did their departure seem inevitable to you?

14. Alma and Mayor are the primary narrators of the book, yet they have very different voices and perspectives. How does pairing these points of view affect the telling of this story, even as they are punctuated by the voices of the neighbors in Redwood Apartments? And how does the chorus of voices affect this main story and pose larger questions of immigration and the Latino experience in the United States?

15. Were you surprised that the book takes place in Newark, Delaware, rather than in the larger Latin American communities of Florida, New York, Texas, or California? What does this setting suggest about immigrant families like the Riveras and the Toros across the country? Do you feel differently about the immigration debate now raging in the United States after reading this book?

16. Do you, the members of your family, or your friends have stories of moving to another country to start a new life? Did any of the stories in the novel resonate with those you know?

17. How does the final chapter, told in Arturo’s voice, influence your understanding of what he felt about America? What do you make of how he ends his narrative, “I loved this country,” and that it is the last line of the book (286)?

Cristina Henríquez is the author of the story collection Come Together, Fall Apart, which was a New York Times Editors’ Choice selection, and the novel The World in Half. Her work has appeared in The New Yorker, The Atlantic, The American Scholar, Glimmer Train, the Virginia Quarterly Review, Ploughshares, TriQuarterly, AGNI, and Oxford American, as well as in various anthologies. She lives in Illinois.

Hum If You Don’t Know the Words
Back to Top