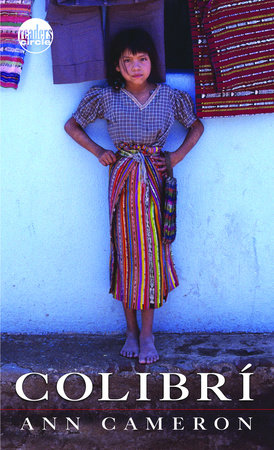 1. In what ways is Colibrí like a hummingbird? What animal best represents you?

2. How does fortune-telling play a role in the lives of both Uncle and Colibrí? Do you believe it’s possible for anyone to see into the future?

3. Is this the first time you’ve read a book that takes place in Guatemala? Have you learned much about Central or South America in school or from the media? Why do you think certain cultures and histories get more or less attention in schools and the media? Who makes these decisions, and what problems do they present? What can you do about this?

4. “I’d done something bad, so my parents didn’t want me. I’d believed that practically forever. But Doña Celestina said it wasn’t so” (p. 84).

When Colibrí realizes that it may not be her fault that she is not with her parents, how does it change her attitude toward Uncle, and toward her life of the past several years?

5. Why do you think Colibrí asks to keep the pieces of the broken mug (p. 87)? Have you ever wanted something for personal reasons that didn’t have much monetary value?

6. “It seemed there was another person inside me, a self I didn’t know looking out from my eyes. I liked her, but she frightened me” (p. 108).

What are the qualities of this other “self” Colibrí describes? Why might it frighten her to see her potential in this way? Have you ever felt there are parts of your personality that are just waiting to come to the surface?

7. Despite years of separation, why do you think Colibrí has held on so tightly to her mother’s lessons about honesty? What are the central lessons or ideas you have held on to—or think you will carry forever—that you learned from the people who raised you?

8. Look back at chapter twenty-one. What leads Colibrí finally to make the decision to go to the priest and tell him about Uncle’s plans? Why had she always gone along with Uncle’s plans before?

9. Why do you think the author chooses Two Rivers as the scene for the last encounter between Uncle and Colibrí? How does the symbolism tie into the rest of the story?

10. What mixture of emotions do you think Colibrí feels at the very end of the book? How would you feel in her place?

And Both Were Young
Madeleine L’Engle

It’s Not You, It’s Me
Kerry Cohen Hoffmann

This One Time with Julia
David Lampson

Along the River
Adeline Yen Mah

Pieces of Me
Amber Kizer

Home Is East
Many Ly

The World Beneath
Janice Warman

Too Young to Die
Lurlene McDaniel

If I Ever Get Out of Here
Eric Gansworth

The Door of No Return
Sarah Mussi

Beyond the Chocolate War
Robert Cormier

An Infidel in Paradise
S.J. Laidlaw

The Dark Days of Hamburger Halpin
Josh Berk
Back to Top