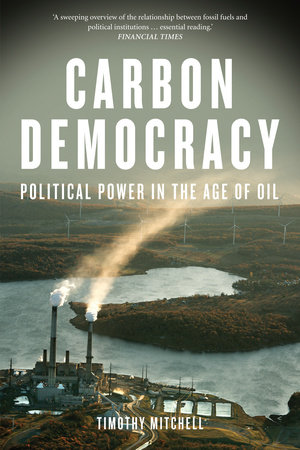 Political Power in the Age of Oil

Political Power in the Age of Oil 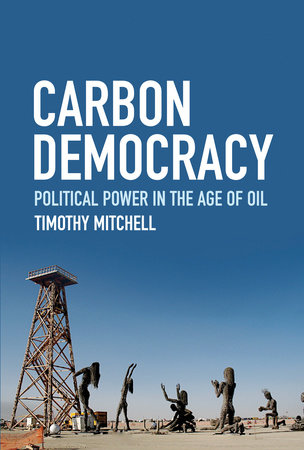 Does oil wealth lead to political poverty? It often looks that way, but Carbon Democracy tells a more complex story. In this magisterial study, Timothy Mitchell rethinks the history of energy, bringing into his grasp as he does so environmental politics, the struggle for democracy, and the place of the Middle East in the modern world.

With the rise of coal power, the producers who oversaw its production acquired the ability to shut down energy systems, a threat they used to build the first mass democracies. Oil offered the West an alternative, and with it came a new form of politics. Oil created a denatured political life whose central object – the economy – appeared capable of infinite growth. What followed was a Western democracy dependent on an undemocratic Middle East. We now live with the consequences: an impoverished political practice, incapable of addressing the crises that threaten to end the age of carbon democracy – namely, the disappearance of cheap energy and the carbon-fueled collapse of the ecological order.

Oil is a curse, it is often said, that condemns the countries producing it to an existence defined by war, corruption and enormous inequality. Carbon Democracy tells a more complex story, arguing that no nation escapes the political consequences of our collective dependence on oil. It shapes the body politic both in regions such as the Middle East, which rely upon revenues from oil production, and in the places that have the greatest demand for energy.

Timothy Mitchell begins with the history of coal power to tell a radical new story about the rise of democracy. Coal was a source of energy so open to disruption that oligarchies in the West became vulnerable for the first time to mass demands for democracy. In the mid-twentieth century, however, the development of cheap and abundant energy from oil, most notably from the Middle East, offered a means to reduce this vulnerability to democratic pressures. The abundance of oil made it possible for the first time in history to reorganize political life around the management of something now called “the economy” and the promise of its infinite growth. The politics of the West became dependent on an undemocratic Middle East.

In the twenty-first century, the oil-based forms of modern democratic politics have become unsustainable. Foreign intervention and military rule are faltering in the Middle East, while governments everywhere appear incapable of addressing the crises that threaten to end the age of carbon democracy—the disappearance of cheap energy and the carbon-fuelled collapse of the ecological order.

In making the production of energy the central force shaping the democratic age, Carbon Democracy rethinks the history of energy, the politics of nature, the theory of democracy, and the place of the Middle East in our common world.

“Carbon Democracy is a sweeping overview of the relationship between fossil fuels and political institutions from the industrial revolution to the Arab Spring, which adds layers of depth and complexity to the accounts of how resource wealth and economic development are linked.”
—Financial Times

“A brilliant, revisionist argument that places oil companies at the heart of 20th century history—and of the political and environmental crises we now face … If we’re ever to curb such behaviour, and to regain some comprehension of our planet’s preciousness, we need first to understand how it came about. Not a book for the season of indulgence, this one. But one that demands to be widely shared.”
—Susanna Rustin, Guardian

“This study of the basis of modern democracy over the past century connects oil-producing states of the Middle East with industrial democracies of the West. Mitchell argues that carbon democracy in the West has been based on the assumption that unlimited oil will produce endless economic growth, and he concludes that this model cannot survive the exhaustion of these fuels and associated climate change. Tim Mitchell has written a remarkable book that deserves a wide audience.”
—Mahmood Mamdani, author of Good Muslim, Bad Muslim

“It’s a book that tackles a really big subject, in a sweeping but readable fashion, and after reading it, it’s hard to imagine thinking about political power the same way again … This book utterly blew me away.”
—Matt Stoller, Naked Capitalism

“A remarkable account of the politics of oil and nation building in the Middle East.”
—The Herald