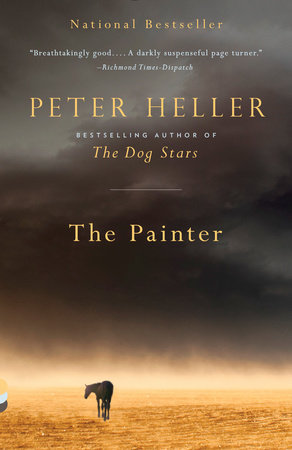 The questions, discussion topics, and reading list that follow are intended to enhance your reading group’s discussion of The Painter, best-selling author Peter Heller’s hauntingly beautiful novel about a reclusive artist who is forced to face his demons after a violent encounter in a small Colorado town.

From the author of the acclaimed novel The Dog Stars comes The Painter, a stunning and suspenseful novel about a man trying to create a good life in the wake of loss and violence.

Celebrated painter Jim Stegner has finally reached a place of equilibrium. Years after serving time in jail for shooting a man in a bar, he leads a quiet life in the hills of the Colorado valley. His days are dictated by simple routines—he no longer drinks, preferring to spend his evenings fly-fishing; he enjoys the company of his effervescent muse; and he works prolifically, allowing him financial stability. In an instant, this peacefulness shatters when Jim witnesses a horrific roadside beating of a horse. Unable to stand idly by, Jim jumps out of his truck and gets into a bloody scuffle with the attacker, breaking his nose. That man, Dell, is a local legend of the worst kind, a hunter whose reputation of cruelty precedes him. The brutality of the incident sticks with Jim, and his rage builds. Jim struggles with the reemergence of this violent side of his personality, all while trying to evade both the police and Dell’s family. The only thing that keeps him sane is painting, a source of comfort and emotional release.

As the situation escalates, Jim retreats to Santa Fe, where, at the urging of his art dealer, he is commissioned to paint an uninspired yet lucrative piece. It is there in Santa Fe that he comes face-to-face with his demons, ultimately reconciling his public and private personas among the vestiges of painful memories. With crisp prose and striking imagery, The Painter is a vigorously suspenseful examination of grief, memory, and the process of creation, both of art and of self, when life’s stability is challenged.

1. The Painter opens several years before the rest of the narrative, in the bar where Jim fired the shot that changed the course of his life. Why do you think the author chose to open on this moment? How did it color your reading experience? Your perception of Jim?

2. An Ocean of Women is a painting born out of a comment made by Irmina. What was your interpretation of this painting? How does it relate to Jim’s treatment of women? Discuss Jim’s relationships with the following characters: Irmina, Sofia, Celia, Cristine. What similarities, if any, exist in how he treats each of these women? What does he admire about the women?

4. The first-person narrative of The Painter allows for a slow reveal of information about Jim and his past. How did this piecemeal revelation add tension to the discussion of Alce’s death? How did it help to create a more sympathetic character?

5. Expressionism, as an artistic movement, is characterized by a preference for subjectivity over realism. Why do you think the author chooses to have Jim paint in this style? How do the concepts of realism versus subjectivity factor into the larger narrative concerns of The Painter?

6. In the beginning of the novel, Bob advises Jim to “be good.” These words are echoed throughout the novel, particularly as Jim wrestles with his self-image in the face of his increasingly violent behavior. Discuss the difference between being good and goodness as described by Jim on page 303. Is Jim a “good” person? What characters, if any, are “good” or display innate “goodness”?

7. On page 74, Jim describes how he “disappear[s]” in awe when viewing certain paintings and certain scenes of nature. Discuss the choice of wording. How do both art and nature provide a means of escapism for Jim throughout the novel?

8. Explore Jim’s relationship with Irmina. How does he rely on her for emotional support throughout the novel? How does she provide guidance for him?

9. Jim is a mostly self-taught painter. Discuss the moment when he realized that he wanted to paint. How did his experiences in childhood and adolescence influence his decision?

10. Trace the events that cause Jim’s violent side to emerge throughout the novel. What, if anything, do these events have in common?

11. Discuss the significance of the painting of the horse and crow. Why do you think the painting has “changed” in his absence after he assaults Celia’s ex-boyfriend? (page 216)

12. Jim paints for himself, but also needs to paint as a means of economic stability. By the end of the novel, do you think he is more accepting of the relationship between creator and consumer, or do the events in Santa Fe harden him toward the interaction?

13. Discuss the “flash flood” as described on pages 289 to 292. Explore its symbolism in the narrative and the development of Jim as a character. Why do you think he signaled Jason? Was it an instinctual or merciful act?

14. Jim’s relationship with his art dealer, Steve, is fraught with tension. How did you view their relationship? Is it one of mutual respect? Of economic necessity? Do you think Steve is intimidated by Jim’s violent past?

15. When Jim goes to Santa Fe, he finds himself in the center of a media maelstrom, carefully constructed by Steve. Discuss Jim’s reaction to becoming a public figure. Why do you think he is most chagrined by the “blogger?”(page 320)

16. How does Jim’s guilt over his actions—both over Alce and his violent behavior—manifest throughout the novel? How does he take to the canvas to mitigate his pain?

17. As you were reading, did you think Jason was going to kill Jim in the last scene of the book? Why do you think he spared his life?

18. Jim inhabits many roles throughout the novel: artist, father, spouse, lover, fisherman, criminal, celebrity. Which role makes him happiest? Which brings about the most conflict in his life?

Peter Heller is the best-selling author of The Dog Stars. He holds an MFA in both fiction and poetry from the Iowa Writers’ Workshop. An award-winning adventure writer and longtime contributor to NPR, Heller is a contributing editor at Outside magazine, Men’s Journal, and National Geographic Adventure, and a regular contributor to Bloomberg Businessweek. He is also the author of several nonfiction books, including Kook, The Whale Warriors, and Hell or High Water: Surviving Tibet’s Tsangpo River. He lives in Denver, Colorado.
Learn More About The Painter
print

A Ladder to the Sky

An Inconvenient Woman
Back to Top