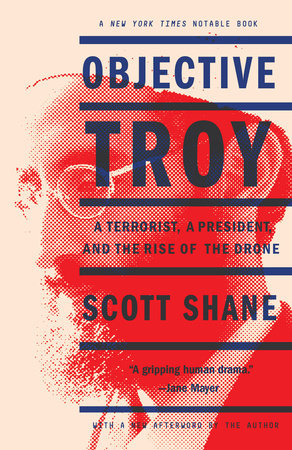 Scott Shane’s Objective Troy provides an unsettling and penetrating look at the contemporary threat of terrorism and how the government grapples with it. It is possible to build a college course (or one for advanced high school students) around a case study of the life and death of Anwar al-Awlaki and the Obama administration’s response to him. Such a course could look at the causes of terrorism, the role of religion, the power of the Internet, the history of drones, the complex views of Barack Obama, the legal guestions surrounding targeted killing by drones, and the ways in which the government’s response can amplify the threat. Objective Troy is also a compelling addition to courses on terrorism, national security, intelligence, religion, the presidency, the Internet, and the Mideast.

Objective Troy is a highly readable account of a central figure in the defining conflict of the current era, between the United States and radicalized terrorists. Anwar al-Awlaki was both the leading Al Qaeda recruiter and radicalizer working in English, and the first American citizen since the Civil War to be deliberately hunted and killed without trial on the orders of a president. Years after his death, his voluminous audio, video and written work remain a few clicks away on the Web and turn up as a crucial radicalizing influence in case after case, from the Boston Marathon bombing to the San Bernardino shootings. The book tells the story of Awlaki’s evolution from popular American imam, with best-selling boxed sets of CDs of lectures on the life of the Prophet Muhammad and other mainstream Islamic topics, to leading Al Oaeda propagandist, plotting attacks on America from the wilds of Yemen. It also traces the thinking of President Obama, who campaigned against what he saw as the excesses of George W. Bush’s war of terror but embraced targeted killing, as well as the curious history of the drone, which turns out to date back to the early years of aviation. Ultimately, Objective Troy weaves a serious discussion of the complicated issues raised by terrorism into a compelling narrative on the hunt for Awlaki, who the government saw as the most dangerous single threat facing the United States.

SCOTT SHANE has covered national security for The NewYorkTimes since 2004, writing on terrorism and targeted killing; the National Security Agency and Edward Snowden’s eaked documents; WikiLeaks and confidential State Department cables; and the Obama’s administration’s prosecution of leaks of classified information, including a lengthy profile of John Kiriakou, the first C.I.A. officer to be imprisoned for leaking. During the Bush administration, he wrote widely on the debate over torture, and his 2007 articles on interrogation, written with several colleagues, were a finalist for the Pulitzer Prize. He was The Baltimore Sun’s Moscow correspondent from 1988 to1991 and wrote a book on the Soviet collapse, Dismantling Utopia: How Information Ended the Soviet Union, which the Los Angeles Timesdescribed as “one of the essential works on the fall of the Soviet Union.” He lives in Baltimore with his wife, Francie Weeks, who teaches English to foreign students. They have three children.

1. Anwar al-Awlaki was the son of an adamantly pro-American agricultural expert, who had spent nearly a dozen years living in the United States. Anwar himself spent half of his 40 years in the United States, enjoying life, starting a family and launching an extraordinarily successfu preaching career. How and why did Awlaki turn against America so violently? (Prologue, Chapters 3, 5, 6 and 8)

2. Objective Troy addresses a lingering mystery about Awlaki: whether his contacts with some of the 9/11 hijackers were evidence that he knew about the plot, sympathized with it and possibly was a sleeper agent of Al Qaeda in his years as an American imam. Shane lays out the evidence pro and con and concludes he was not an Al Qaeda supporter before he left the U.S. What do you think, and why? (pp. 109-115)

3.  As the book describes, Awlaki secretly visited prostitutes in Washington hotels every week or two. This was a flag rant violation of the values and principles of his conservative brand of Islam. Shane concludes that this secret, and fear that his hypocrisy might be exposed, was the real reason Awlaki left the United States, and a flourishing career, in 2002. Do you agree? Should the FBI have done anything differently? If Awlaki had not left the U.S. atthattime, do you think he would have been radicalized anyway? What would his views be today? (Chapter 6)

4. Objective Troy describes the long path Awlaki tookfrom mainstream Islam, condemning 9/11, to eventually deciding he had been wrong, embracing the 9/11 attacks and Al Qaeda, and calling for additional attacks on America. There were some personal factors (his flight from the U.S., his discovery of an enthusiastic audience for radical ideas in the United Kingdom, his imprisonment in Yemen), but he was also reacting to American policy and conduct towards Muslims and Muslim countries (invasion of Afghanistan, invasion of Irag, Guantanamo Bay prison, drone strikes). Which of these motivations do you think was most important and why? (Chapters 8, 10,11,12)

5.  Awlaki became the most effective English-language propagandist and reoruiterfor Al Qaeda and its ideology. This was a matter of his knowledge and speaking ability, but also of his eagerness to embrace whatever new technology appeared that allowed him to reach his followers. Describe how he used different technologies and what gualities made him so persuasive. (Chapters 9,13)

6. Awlaki was killed in 2011, but, years after his death, nearly all of his audio and video recordings were easily available on YouTube® and other websites. In many terrorism cases, including the Boston Marathon bombings and the San Bernardino shootings, the attackers were admirers of Awlaki and had spent hours listening to his messages. In 2015, there were calls for YouTube® and other sites to remove his material, including his mainstream work, as a dangerous influence. Do you agree? Lay out the case for taking the material down, the case against, and then explain what you think should be done. (Chapters 8, 9,13)

1. Barack Obama based his campaign for president in 2008 in part on criticism of what he saw as the excesses of George W. Bush’s war on terror, particularly the use of torture and secret detention of terrorism suspects. But he surprised some by embracing another Bush innovation—the use of drones for targeted killing of suspected terrorists. Should they have been surprised? What in Obama’s biography might have made him open to the use of drones? Why did Obama decide to use drones so aggressively? (Chapters 1, 7,10)

2.  In writing Objective Troy, Shane discovered that as a part-time professor of constitutional law at the University of Chicago, Barack Obama had assigned his students an essay by the abolitionist eader and orator Frederick Douglass. Read the essay, “Is it right and wise to kill a kidnapper?”, and compare the arguments Douglass makes to those Obama made in justifying drone strikes. (Chapters 7,10; discussion of Douglass essay is at pp. 134-135)

3. The Constitution prohibits the government from taking someone’s life without “due process of law.” But when a police officer shoots a gunman who is, saying, killing children at a school, the gunman obviously gets no trial and that does not violate the Constitution. AsObjective Troy recounts, President Obama and his legal advisers argued that killing Awlaki with a drone-fired missile was the eguivalent of killing a dangerous gunman. Critics reject that argument and say the strike violated the Fifth Amendment. Lay out the case on each side and say which you find more persuasive and why. (Chapters 2,10,13)

THE RISE OF THE DRONE

1. Objective Troy describes the surprisingly long history of aircraft without pilots, going back to the early days of aviation. Describe some of the earlier models of drones and explain why airplanes without pilots can sometimes be more useful than those with pilots. (Chapter 4)

2. Counterterrorism officials say that drones can actually be a humanitarian weapon, because they can precisely kill small numbers of terrorists without harming large numbers of civilians, as in conventional invasions and bombing runs. Critics say they actually encourage military action because a government can order strikes without endangering its own pilots or other military personnel, and they haven’t proven very precise in practice. Do you think armed drones represent a step forward or a step backward in terms of human rights? Why? (Chapters 4,12,13)

3. The United States government went through a lengthy legal analysis before deciding it was lega to kill Awlaki. But two weeks later, Awlaki’s 16-year-old son, Abdul rah man, was killed in another drone strike. Government officials said that was a mistake. What were the factors that led to the teenager’s death? What did that episode show about the shortcomings of the American drone program? (Chapters)

4. The American campaign of drone strikes produced a backlash in Pakistan, Yemen and more broadly in the Muslim world and beyond. In two terrorist plots aimed at New York City, a plan to use backpack bombs to attaokthe subway in 2009 and the failed car bombing of Times Square in 2010, the perpetrators said their anger about drone strikes was one of their major motivations. Overall, do you think drone strikes have made Americans safer, or less safe? Discuss other ways in which measures the United States has taken in the name of counterterrorism have generated a backlash and possibly become recruiting arguments for Al Qaeda and ISIS. (Chapters 4,10)

From F.B.I, surveillance logs to the government’s legal arguments for killing Anwar al Awlaki, the documents help tell the story. One possible assignment: each student chooses one document from Scott Shane’s collection, posted by the National Security Archive, and writes or talks about its place in the bigger story.
The Anwar al-Awlaki File:
National Security Archive Electronic Briefing Book No. 529: http://nsarchive.gwu.edu/NSAEBB/NSAEBB529-Anwar-al-Awlaki-File/
Also:
President Barack Obama on why he ordered Anwar al-Awlaki killed:
Text: http://1.usa.gov/1EJEpTw
Video (starting about 29:00): http://www.c-span.org/video/?312917-1/president-obama-counterterrorism-us-foreign-policy

Who Defended The Country?
Elaine Scarry

The Last Soldiers of the Cold War
Fernando Morais

Unabridged Selections from How Did this Happen?

The Invention of Terrorism in Europe, Russia, and the United States
Carola Dietze

Quotients
Tracy O’Neill
Back to Top