In the Country Reader’s Guide 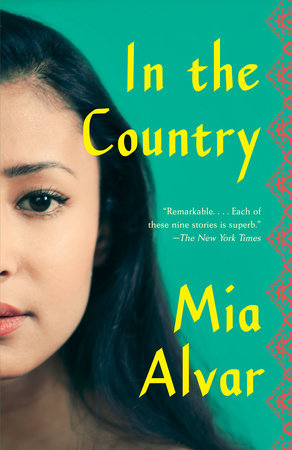 In the Country Reader’s Guide

print
In the Country Reader’s Guide

The questions, suggested readings, and other material that follow are intended to enhance your group’s conversation about Mia Alvar’s In the Country, a layered and intimate examination of a diverse set of Filipino characters as they stay in and venture far from their home country.

In these nine globe-trotting tales, Mia Alvar gives voice to the women and men of the Philippines and its diaspora. From teachers to housemaids, from mothers to sons, Alvar’s stories explore the universal experiences of loss, displacement, and the longing to connect across borders both real and imagined. In the Countryspeaks to the heart of everyone who has ever searched for a place to call home—and marks the arrival of a formidable new voice in literature.

1. What does the title of the collection, In the Country, and the individual experiences the book comprises, suggest about ways one can identify with one’s country even if not geographically? Do you or anyone you know have similar experiences of cultural diaspora, and if so, how does displacement affect your/their sense of cultural identity?

2. In “The Kontrabida,” what does the narrator’s impression of returning home as an adult illustrate about the nature of memory and how travel can change us? Have you ever experienced a similar disconnect between a place and your memory of it?

3. What are the moral implications of Loretta’s treatment of her husband as he lay dying, in her son’s opinion and in yours?

4. How are various individuals, adults and children, who look on the surface “different”—whether it is due to illness/handicaps, ethnicity/race, or cultural elements such as clothing and makeup choices—treated throughout these stories? What is universal about the judgments the characters pass on people unlike themselves, and what is particular to these Filipino communities?

5. Discuss how Sally views her influence in the child Aroush’s life in “The Miracle Worker.” What do you think she’s implying when she says a teacher is “not necessarily heroic, but useful” (49)?

6. How do characters cope with the various trials that are put in front of them, such as Aroush’s special needs in “The Miracle Worker” or the losses of Milagros and Jim in “In the Country”? What does it mean for them to see these challenges as “little miracle[s]” as well as tests of endurance from God?

7. By the time Alice, a model from America, leaves Manila in “Legends of the White Lady,” what has she learned about her own self-worth, including in the sense of feeling that her “beauty’s an accomplishment” (85)? What are the gains and losses that come from her slavishly attending to her appearance and perception of being exotic?

8. How do Alice and other women in the collection exemplify the strictness of gender roles in the Philippines, i.e., the idea that “a wife and mother’s not a woman anymore” (113)? Who among them successfully works around those expectations, and how does that affect their belonging to their home country, community, and culture?

9. What effect does the “we” voice that narrates “Shadow Families” have on your reading experience? How does it reinforce the communal experience of these women in Bahrain? To what degree are women like Baby—or in the previous story, Alice—seen as a threat to these groups of women who are on the “inside”?

10. Mia Alvar uses a variety of narrative points of view to tell these stories. How did meeting the characters in these different degrees of closeness impact your reading of their stories and lives and your identification with them? What did that variety lend to the overall portrait of Filipino culture in the collection?

11. Annelise calls herself “bunot”—an empty husk—in “The Virgin of Monte Ramon”: how much of this comes from her handicap or because she cannot meet the cultural expectations of women as a result?

12. What are some of the ways that the generational gap between parents and children causes tension in the stories, particularly between generations of women? When are women valued more for being young and attractive, and when is it more beneficial for women to be “heroes” in old age (199)?

13. What is the role of religion in Filipino culture, including how it reinforces individual and collective shame as well as fosters a kind of wisdom and reassurance in the face of difficulties?

14. In “Old Girl,” we see a full portrait of marriage in all of its various stages. How does this reinforce the metaphor of marriage as a marathon?

15. What do you think of the distinction between the possibilities for pretty girls vs. smart girls, as made in “A Contract Overseas”? Is it really true that “college-speak could elevate [one] from the muck” (240), or are there further impediments, such as class, ethnicity, and even looks, to nontraditional futures for women in the Philippines?

16. How are Filipino politics woven throughout the stories to provide context, and also as dramatic events in and of themselves? Did you sense throughout that the characters felt dominated by other countries and were suffering from their country’s “history of fragments and confusion” (244)?

17. The novella “In the Country” moves back and forth in time to show the evolution of a marriage juxtaposed with its most devastating crisis: the loss of the couple’s son. How does the shifting chronology enhance the urgency of what happened in February 1986 vs. all that led up to it?

18. To what degree is this marriage founded on ideals, political and emotional? In the end, how do those ideals hold up against the forces of reality, and do the characters understand their mistakes in hindsight?

19. How are politics entangled with emotions and romance in the novella? Is this intersection more prominent for Milagros as opposed to Jim, by virtue of her being a woman? Consider the feelings that Milagros has toward her children, especially her daughter, and what changes after Jaime dies as a result of politics.

20. How is Milagros similar to other women in the collection, and how is she different? What does her fate suggest about the choices women must make in the Philippines between family and personal ambition?

Learn More About In the Country
print

Before You Suffocate Your Own Fool Self

The Delight of Being Ordinary

The Shivering
Back to Top