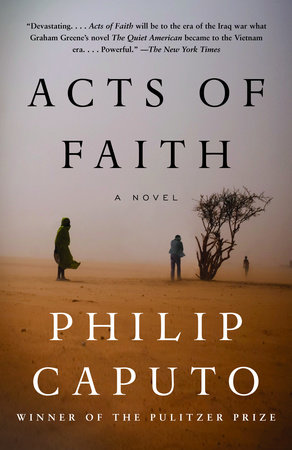 “Devastating. . . . Acts of Faith will be to the era of the Iraq war what Graham Greene’s novel The Quiet American became to the Vietnam era. . . . Powerful.” —The New York Times

The introduction, discussion questions, suggestions for further reading, and author biography that follow are designed to enhance your group’s discussion of Philip Caputo’s Acts of Faith. Set in war-torn Sudan, masterfully plotted and packed with suspense, the novel draws readers into the center of a devastating war and into the hearts and minds of the people confronting choices that challenge their most basic moral, political, and religious beliefs. It is an unflinching portrait of good intentions corrupted and idealism tarnished by the horrific reality of death and destruction.

Sudan is in the midst of an endless civil war between Muslim Arabs in the north and Christian and pagan blacks in the south. The fundamentalist Islamic government has imposed a blockade on humanitarian aid in the south, barring UN agencies from flying into areas controlled by the Sudanese People’s Liberation Army. Douglas Braithwaite, an American pilot, steps into the breach, offering the services of his small freight airline to independent aid agencies willing to break the rules. Among his clients is Quinette Hardin, a relief worker for an evangelical Christian organization that negotiates the release of blacks kidnapped by Arab slave traders. Quinette’s missions take on another dimension, however, when she falls in love with the handsome rebel leader Michael Goraende.

As the war gets hotter and the rules harsher, Douglas convinces his partners, Wesley Dare, an aging American bush pilot, and Fitzhugh Martin, the company’s multiracial administrator, that supplying humanitarian aid is not enough. Within weeks, the airline is running arms to the SPLA and earning tremendous profits. Fitzhugh, who is having an affair with Lady Diana Briggs, a descendent of British colonists known for her good works throughout Africa, persuades himself that the illegal arms are necessary to stop the deaths of countless innocents at the hands of ruthless government troops and the local Islamic warlord who supports them. Wesley sees the increased income as a means of escaping his rough-and-tumble life in Africa and starting a new life with Mary English, a fellow bush pilot. Douglas, driven by a fateful combination of altruism and arrogant self-confidence, conceives ever more dangerous schemes, certain that he can change the course of the war and gain the wealth and glory he covets.

1. Acts of Faith opens with an interview with Fitzhugh Martin that takes place several years after the events recounted in the novel. How does this set the tone for the story that follows? What issues does it raise about the war in Sudan and the efforts, both military and humanitarian, to bring it to an end?

2. The meeting at Diana Briggs’s home [pp. 21–32] brings to light various reasons for helping the rebels in the south. How would you characterize the positions taken by Diana, John Barrett, Douglas Braithwaite, and Fitzhugh Martin? Which argument is objectively the most persuasive? Which one carries the most emotional impact?

3. Barrett declares, “Allah gives his stamp of approval to mass murder” and describes the war as “a continuation of the Crusades. The crescent versus the cross” [p. 25]. Is his opinion justifiable on the basis of recent historical events, or does it represent a narrow-minded Western view of Islam? Is it possible to separate religion and politics in Sudan and other places torn by conflicts among different ethnic or religious groups?

4. What first impression does Douglas Braithwaite make? What qualities does he project that lead Fitzhugh to say, “There was something about the American that made you not want to let him down” [p. 32]? Are any of Douglas’s less attractive qualities apparent at this first meeting?

5. Wesley Dare observes, “it was faith in some particular creed, sect, ideology, cause, or crusade” [p. 34] that spurred the violence he has witnessed over twenty-five years as a bush pilot. Fitzhugh talks about “the calm of an abiding conviction” of the evangelical missionaries and wishes he too had “some sort of inner resource that he could draw on” [p. 58]. How do their differing views of faith affect their feelings about Douglas and their willingness to follow his lead?

6. Do the “acts of faith” in the novel necessarily lead to negative consequences? Are there characters whose actions demonstrate that “abiding convictions” can motivate heroic behavior and express basic human decency in the face of the unspeakable?

7. What does the conversation between Tara and Douglas [pp. 70–72] reveal about the strengths and weaknesses of the American’s approach to crisis situations? What realities does Tara recognize that Douglas refuses to accept? Are there times as the story unfolds that Douglas’s direct manner and almost childlike candor bring to light moral imperatives that the other characters seem to ignore?

8. In contemplating the history of Sudan, Fitzhugh says, “What was it about this place that created visionaries of all kinds, warrior-prophets and warrior-saints, messiahs true and false? . . . Was Tara right in saying that Sudan’s distances conjure up mirages of the mind, its boundless horizons inspiring men to imagine that anything is possible? . . . And what is it about this place that even as it molds true believers out of its native clay, it also draws true believers from elsewhere?” [p. 104–105]. Is there a basic truth in this poetic, even spiritual, view of Sudan? How much of a country’s personality stems from its history and geography? Can an argument be made that nineteenth-century European imperialism in Africa was, at least in part, an expression of optimism and hope rather than simply a drive for economic and political dominance?

9. Several of the chapters focusing on Quinette are titled “Redeemer.” On one level this refers to her job of liberating slaves captured by Arab raiders. What else does it suggest about Quinette’s motivations for being in Sudan, about the character of her faith, and about her eventual willingness to cross the line between good works and illegal activities? What events bring to light the ambiguous nature of her devotion to the humanitarian and religious causes with which she is involved?

10. What role does Phyllis, the CNN reporter, play in the novel? Is she a foil for the others, especially Quinette? Does she represent the cynicism of the press? Or does she represent a viable ethical—or political—position in her own right?

11. Both Wesley [pp. 173 and 405, for example] and Fitzhugh [pp. 261 and 457] are well aware of Douglas’s faults, yet they choose to ignore them. Which man is clearer and more consistent about his reasons for staying with Knight Air? Does this give his arguments a greater moral weight?

12. Douglas and Quinette embody many of the characteristics thought of as typically American, from their enthusiastic, can-do style to their dangerous naïveté and self-righteous arrogance. How does Caputo keep them from becoming stereotypes? Do his descriptions of their backgrounds, for example, make them more sympathetic characters? What effect do the decisions they make at the end of the novel have on your feelings about each of them? Do they to some extent “redeem” themselves?

13. The chapters about Ibrahim Idris provide an unusual perspective on Islamic history and politics in Africa. What parallels are there between the aspirations of both sides in the conflict? Is Caputo evenhanded in describing the faults—as well as the ideals—of each side? Did these chapters change your understanding of the upheavals taking place in much of the Muslim world today?

14. There are three love affairs at the heart of Acts of Faith: the relationships between Quinette Hardin and Michael Goraende, Wesley Dare and Mary English, and Fitzhugh Martin and Diana Briggs. How does each relationship represent an act of faith? Which of these unlikely alliances is the most credible? Are any of the characters completely honest with themselves—and with their lovers—about the reasons for their romantic attachments? What ulterior, perhaps even unconscious, motives might you ascribe to each of them?

15. Michiko Kakutani calls Acts of Faith “a parable about American excursions abroad and the dangers of missionary zeal, a Conradian tale about idealism run amok, greed sold as paternalistic benevolence, ignorance described as compassion” (The New York Times, May 3, 2005). How accurately does the book portray the failure of humanitarian efforts around the world, both by the UN and by private agencies? Does it present a convincing portrait of the way America is perceived today?

16. Philip Caputo’s best-known book, A Rumor of War, is a memoir of his experiences as a soldier in Vietnam and a meditation on what war does to ordinary soldiers. To what extent can Acts of Faith be seen as a return to—or a continuation of—the questions explored in that book? Why has Caputo, a journalist who covered the wars in Sudan, chosen to write a novel rather than a nonfiction account of what he saw?

Philip Caputo is the author of six other works of fiction and two memoirs, including A Rumor of War, about his service in Vietnam. He worked for the Chicago Tribune for nine years and shared a Pulitzer Prize in 1972 for his reporting on election fraud in Chicago. He divides his time between Connecticut and Arizona.

The Wandering Falcon
Back to Top