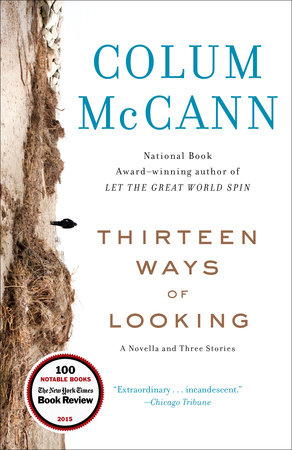 1. The title of this collection comes from the poem “Thirteen Ways of Looking at a Blackbird” by Wallace Stevens, which appears in its entirety throughout the first story. What do you think is the significance of the poem, and why did the author adapt its title for this collection?

2. McCann has said that his favorite passage from the poem is “I do not know which to prefer,/The beauty of inflections/Or the beauty of innuendos,/The blackbird whistling/Or just after.” How might this passage relate to the theme of surveillance throughout the novella?

3. The world of the first story, “Thirteen Ways of Looking,” is one in which security cameras are everywhere but fail to capture the crucial moment of the attack on Mendelssohn. What do you think is the significance of that failure, and what does it say about how we perceive the truth?

4. The act and art of storytelling appears in many forms throughout this collection—from the unnamed author crafting his story in “What Time Is It Now, Where You Are?” to Carlos presenting a new “story” of himself as a supposed agent of peace in “Treaty.” What are some other examples? What do these ­instances of storytelling have in common, and how are they ­different?

5. What do you think Beverly is seeking in her trip to London in “Treaty”? Does she find it? Do you agree with her decision not to expose Carlos for who he is? Does she achieve justice or revenge?

6. Discuss the theme of empathy as it’s explored in this collection. What does empathy mean to you? What does it mean to the characters in these stories?

7. In his author’s note, Colum McCann writes, “In the end, . . . every word we write is autobiographical, perhaps most especially when we attempt to avoid the autobiographical.” Do you agree or disagree with that statement? How does it affect your reading of the collection?

8. None of the stories are told in first person, but each has its own distinct voice that brings to life the characters’ perspectives. How does the author achieve this? Did you identify with any of the characters more than with others? Why?

9. Compare and contrast the different ways the author depicts the relationship between a parent and a child throughout the collection. What does the idea that it’s “Impossible to be a child forever. A mother, always” mean to you?

10. The mother in “Sh’khol” struggles to find a translation for the title word, meaning a parent who has lost a child, and eventually realizes that the word is “shadowed.” Why do you think that’s the word she decides on? Do you agree or disagree?

11. There is a large amount of random violence, loss, and difficulty in these stories. Ultimately, do you think this is an optimistic collection? McCann has said that to be a good optimist one must be “muscular enough to refuse cynicism.” What do you think he means by this?

12. Each of the four stories is written in thirteen sections. There is a very conscious structure at play, but it’s subtle, particularly in “Sh’khol” and “Treaty.” Why do you think that is? Do you think being aware of that structure as a reader would take away from the spontaneity of the stories?

13. What would your own thirteenth question be?

These stories were primarily completed in 2014 on either side of an incident that occurred in New Haven, Connecticut, on June 27, when I was punched from behind and knocked uncon­scious, then hospitalized, after trying to help a woman who had also been assaulted in the street.

Some of these stories were written before the assault and some of them were written afterward (for example, the punch in “Thirteen Ways” was dreamed up long before the incident, but Beverly’s recognition of her attacker in “Treaty” was written later).

Sometimes it seems to me that we are writing our lives in advance, but at other times we can only ever look back. In the end, though, every word we write is autobiographical, perhaps most especially when we attempt to avoid the autobiographical.
For all its imagined moments, literature works in unimagi­nable ways.

These stories have their own voices, but to learn more about their provenance, including the Victim Impact Statement from that incident in Connecticut, please go to my website, colummccann.com.
Learn More About Thirteen Ways of Looking
print

The Tragedy of Arthur

Gallatin Canyon
Back to Top