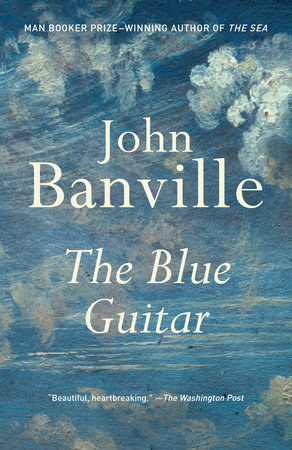 The questions, discussion topics, and reading list that follow are intended to enhance your reading group’s discussion of The Blue Guitar, a charmingly bitter portrait of an artist/thief (“painster”) coming to terms with the realities of his needs, losses, and desires in a world he feels he’s never fully seen, from the winner of the Man Booker Prize.

Oliver Otway Orme—a man equally self-aggrandizing and self-deprecating—is a painter of some renown, and a petty thief who has never been caught . . . until now. Unfortunately, the purloined possession in question is the wife of the man who was, perhaps, his best friend. Fearing the consequences, Ollie has fled—not only from his mistress, his home, and his wife, but from the very impulse to paint, and from his own demons. He sequesters himself in the house where he was born, and thus, he sets about trying to uncover the answer to how and why things have turned out as they did. A witty and trenchant novel about artistic creation and the ways in which we learn to possess one another—and hold on to ourselves—The Blue Guitar shows Man Booker Prize-winning author John Banville at the peak of his powers.

1. What do the title of the novel and its epigraph reflect about the kind of story told and the narrative point of view taken in The Blue Guitar?

2. How does Olly gain the reader’s trust—or not—from the opening pages of the book? Where does he fall on the spectrum of unreliable narrators?

3. How does Olly’s way of looking at the world—of observing the people and things around him—and his translation of that view into words illustrate his artistic proclivities?

4. What are Olly’s rules for stealing? Why do you think he established them in the first place, and what do they suggest about what he really gains from stealing?

5. Olly sometimes refers to the reader as “you,” which suggests that he’s aware of an audience’s presence. But do you think that his story is a straightforward confession, and an honest one? Was your trust in him consistent throughout the book, or did it change as you read?

6. While Olly is a thief and thus secretive by necessity, he’s ostensibly free to tell all in the pages of this novel. Why do you think that is?

7. Do you think that Olly’s adult point of view inflects his telling of his childhood memories? How do his recollections and their tone contribute to the book’s depiction of memory?

8. What is the significance of the book’s “outrageous” names and pairs of names in the book? How is Olly’s (and John Banville’s) playful attitude toward names a reflection of the shifting nature of characters’ personalities and of the book’s overall fluidity with language?

9. When describing painting and painters, Olly says, “The expressing is all.” How do you see this manifested in Olly’s work (as it’s described), voice, and the prose style of the novel on the whole? What is the balance between style and plot in The Blue Guitar?

10. How does humor change the tone of the novel as well as your impression of Olly? What kind of humor would you say he possesses?

11. What does Olly find in Polly that he doesn’t find in Gloria? Are the two women in and of themselves, outside of the other memories that Olly associates with them, indeed that different?

12. The metaphor of seeing the world through a looking glass, that is, from a purely reflective vantage point, appears several times in the novel. What does this suggest about Olly’s personal and artistic limitations and desires?

13. Where you surprised to learn the reason for Olly and Gloria’s split? What does the way Olly tells us about it suggest about its lingering effects on him and his overall sensitivity?

14. Olly’s relationships with women—his wife, lover, and daughter—are tinged with very different emotions and scars. Why, then, does he say that he’s “devastatingly enlightened” by the realization that “there is no such thing as woman”?

15. What are the consequences of the discovery of Olly’s thieving versus those of Gloria’s discovery of his infidelity? From these two revelations, what comes to the surface about not only the things he’s stolen but, simultaneously, about the things that have been stolen from him?

16. Toward the end of the book, Olly discusses the ideas of exile and return. To what degree is his exile self-imposed or put upon him by others?

17. Olly experiences familial conflicts not only as a husband but also as a father and a son. How does The Blue Guitar show a spectrum of relationships between parents and children? Were you able to relate to any of what a parent felt toward his or her child, or vice versa, in the novel?

18. Do you think that Olly is the most egregious of thieves, or are there worse crimes than his committed in the novel?

John Banville was born in Wexford, Ireland, in 1945. He has been the recipient of the James Tait Black Memorial Prize (1976), the Guardian Fiction Prize (1981), the Guinness Peat Aviation Book Award (1989), and the Lannan Literary Award for Fiction (1997). He has been both short-listed for the Booker Prize (1989) and awarded the Man Booker Prize (2005) as well as nominated for the Man Booker International Prize (2007). Other awards include the Franz Kafka Prize (2011), the Austrian State Prize for European Literature (2013), and the Prince of Asturias Award for Literature (2014). He lives in Dublin.
Learn More About The Blue Guitar
print

The Young Wan
Brendan O’Carroll
Back to Top