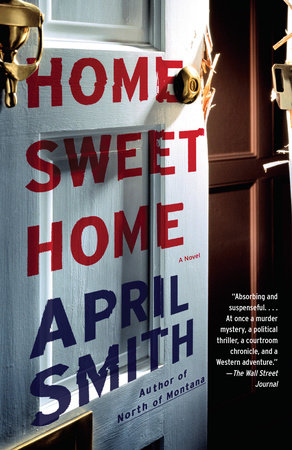 The introduction, author biography, discussion questions, and suggested reading that follow are designed to enhance your group’s discussion of Home Sweet Home, the provocative new novel by April Smith.

1. Why did the Kuseks decide to leave Manhattan and move to the American heartland? Do you think it served their needs at the time? What kinds of situations motivate people to change their lives so radically?

2. Betsy’s membership in the Communist Party is crucial to the plot. When she first meets Cal it is a problem in their relationship.  How is that resolved?

3. Betsy and Cal must adapt to a completely different way of life in rural South Dakota. What are some of the values they learn to embrace?

4. Dutch and the other ranchers feel they get no help from the government, which fosters fierce individualism. What is the appeal of supporting McCarthy? How does this relate to politics around the world today?

5. Cal and Scotty start out as war buddies but their relationship changes when Cal moves west. What goes wrong—and right—between them? Why does Scotty leave town?

6. Betsy faces major challenges as a mother and a working wife. Do you think she is a strong character? What role does her friend, Stelal Fletcher, play in the book? Would you have let your daughter ride off on a horse with Doris Roy?

7. Betsy’s sister, Marja, was blind as a child. Howdid that affect the choices Betsy made? Who dominates and does it shift over the years? How does Betsy reconcile her love for her sister with her brother-in-law’s personality?

8. When Cal first runs for office, how does he convince people to vote for him even though he is a Democrat and the majority of his neighbors are Republicans? What role does the banker, Verna Bismark, play as the lone woman in the politics of Pennington County?

9. What methods did Senator Joe McCarthy use to create the atmosphere of suspicion and mass hysteria that affected so many Americans? Some readers have responded to this book with memories of family members who were impacted by the Red Scare of the 1950s. Do you have a story to tell?

10. Did you notice a motif of fatherhood in the novel? What responsibilities do the fathers share and what obstacles do they face?

11. There are laws that prevent public officials from being sued for slander. Why is the Kusek case different? Considering the risk of more hostility toward his family, why did Cal go forward with the lawsuit?

12. Jo and Lance are very close. What makes them band together? Do you think growing up on a ranch had an effect, or would they have been as close growing up in New York? On a scale of one to ten, how rebellious was Jo as a teenager?

13. Was the principle of the high school, Mr. Emry, justified in secretly recording Betsy’s conversation?

14. How is the FBI portrayed differently in Home Sweet Home as compared to the author’s FBI Special Agent Ana Grey mysteries?

15. How is Jo treated when she returns to Rapid City as an adult to visit her family members in the hospital? How do the townspeople respond to the violent crime? How does their behavior compare to their treatment of her family as she was growing up? Is their reaction surprising? Why or why not?

16. Why did Derek LaSalle attack Lance Kusek and his family years after Cal and Betsy were gone?  What did he think he could accomplish? What role does Honeybee Jones play in the outcome? Who or what is the villain in this saga?

17. At the end of the story, Jo believes that “nature will repair itself” (351). What does she mean, and why do you think the author chose to conclude the book on this note?   Would you say the prairie is another character in the book?

18. The novel was inspired by real events that took place in Washington State. The author moved the story to South Dakota and reimagined the characters. Do you think by writing this as fiction she was able to provide the reader with a more intimate sense of what they experienced? In what ways does fiction have more or less power than nonfiction?

The Only Girl in the Game
John D. MacDonald

The Madonna of the Sleeping Cars
Maurice DeKobra

The Steel Spring
Per Wahloo

The Door to Bitterness
Martin Limón

A Good-Looking Corpse
Jeff Klima
Back to Top