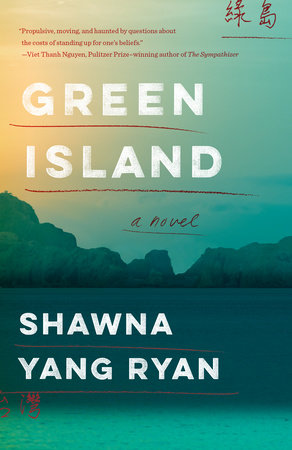 The introduction, author biography, discussion questions, and suggested reading that follow are designed to enhance your group’s discussion of Green Island, a gripping novel by Shawna Yang Ryan.

Taipei, February 28, 1947: As an uprising rocks Taiwan, a young doctor is taken from his newborn daughter by Chinese Nationalists, on charges of speaking out against the government. Although he eventually returns to his family, his arrival is marked by alienation from his loved ones and paranoia among his community. Years later, this troubled past follows his youngest daughter to America, where, as a mother and a wife, she too is forced to decide between what is right and what might save her family—the same choice she witnessed her father make many years before. A stunningly lyrical story of a family and a nation grappling with the nuances of complicity and survival, Green Island raises the question: how far would you go for the ones you love?

1. Why do you think that the author chose Green Island as the title of her book? How might it suggest or otherwise echo some of the major themes of the novel?

2. Who narrates Green Island? Why do you think that the author chose to never name her? How does the narrator become privy to the information and stories that she shares? Do you think that she is a reliable narrator? Why or why not?

3. Why is Dr. Tsai taken away? What is he accused of? How does he react to this charge? How do the other three men with him react to what they are charged with? How does Dr. Tsai’s imprisonment change him? What feelings does his wife have upon his return and in the time after? Is her response to his return surprising?

4. In Chapter 4, what does the narrator say is Baba’s flaw? Are there any other characters who seem to share this same flaw? Explain.

5. Evaluate the role of women in the story. What rights do the women have and what is their place in society? What does it mean to be a wife and mother? What restrictions are placed upon them as a result of their being women? How does the female experience seem to differ for the younger generations of women represented in the book?

6. Consider the themes of ethics and morality. Do you believe that Dr. Tsai and his daughter made the right choices in the major decisions they faced? Did they have any other choice? What motivated their decisions to do what they did? How did their choices ultimately impact their lives and the lives of others? What does this suggest about ethics and morality? Is there always a right and wrong choice?

8. What role does faith play in the novel? In what ways do the characters find faith? What causes their faith to waiver? Why do Ah Zhay and her mother turn to the church? Other than religious faith, what other kinds of faith are depicted in the book?

9. Consider examples of loyalty and betrayal in the book. To whom are the characters loyal? Conversely, what are some examples of betrayal found in the book? Who are some of the perpetrators and what causes them to betray someone else? Do they confess their betrayal or infidelity? If so, are they forgiven? Do they forgive themselves? Does the book ultimately suggest where one’s primary loyalty should lie?

10. How are terms like “family,” “citizen,” and “home” defined within the novel? What do the three have in common? At the end of the book, what does the narrator say it means to be a citizen? Do you agree with her? Discuss.

12. What does the book suggest about the United States’ reaction to international tragedy? Do you agree? Why or why not? Likewise, how do the people of Taiwan respond to the tragedies happening within their own borders? What influences or else confines their responses and reactions?

13. Consider literature as a motif within in the novel. What examples of literature and literature as propaganda are contained therein? Which of the characters in the story are writers? Why does Jia Bao want to write a book? Why is it considered a danger? What does this suggest about the power of the written word?

14. How does freedom come to be defined within the novel? Would you say that the characters in the novel are free? Why or why not? According to the book, what determines whether or not one is free?

15. Consider some of the secrets kept by the characters in the novel. Why do they keep these secrets and what impact does their secret keeping have on themselves and those around them? Do you agree with their choices to keep secrets? In other words, are there some instances where it is best to keep secrets? Discuss.

17. How does the narrator come to know her parents better over the course of their lives? How do her opinions change from those she held as a young girl living with them and what incites these changes? What do we learn about the parent-child relationship from the narrator’s relationship with her own children and the way that her children perceive her?

18. Some of the characters in the novel question the activism of their family members, as they believe it will threaten their safety. Do you feel that their activism was worthwhile, necessary even? Was their activism successful or futile? Explain.

19. Before the narrator leaves Taipei, she visits a few memorials. How does she seem to feel about these memorials? What does she mean when she says, “We have to remind ourselves to remember” (377)? Are memorials sufficient reminders?

20. At the conclusion of the book the narrator speaks of the experience of her family and says: “It was more than a story. It was like this, wasn’t it?” (381). What do you think she means by this?

21. The leaders of China and Taiwan recently had a formal meeting for the first time in sixty-six years, and it made major international news. Having read Green Island, why do you think this event was so momentous? How do you think the characters of the novel would react to it?

Shawna Yang Ryan is the author of two novels: Water Ghosts (originally published under the title Locke 1928) and Green Island. Her first novel, a San Francisco Chronicle best seller, won the UC Davis Maurice Prize and was a finalist for the 2008 Northern California Book Award. It was also long-listed for the 2010 Asian American Literary Award. Ryan has also published work in The Asian American Literary Review, Berkeley Fiction Review, Kartika Review, and ZYZZYVA. She is a former Fulbright scholar and teaches creative writing at the University of Hawai‘i at Mānoa.
Learn More About Green Island
print

Song of a Captive Bird

A Dictionary of Mutual Understanding

The Last Watchman of Old Cairo

A Partial History of Lost Causes

Corelli’s Mandolin
Back to Top