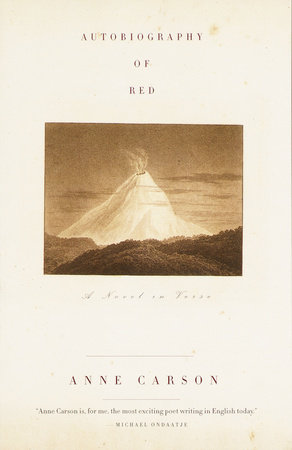 "This book is amazing–I haven’t discovered any writing in years so marvelously disturbing." –Alice Munro

The introduction, discussion questions, suggestions for further reading, and author biography that follow are designed to enhance your group’s reading and discussion of the work of Anne Carson, whom Michael Ondaatje praised as "the most exciting poet writing in English today." Carson is a winner of the prestigious MacArthur fellowship, and has been the recipient of much admiration in the literary world. She is credited with the invention of an entirely new kind of poetry, fusing free verse with prose passages, using pastiche to startling effect, combining searing emotion with austere intellect. Interspersing her own words with quotes and references to sources that range from classical Greek literature, St. Augustine, the Bible, and the Tao to Emily Dickinson, Virginia Woolf, Gertrude Stein, Franz Kafka, and Marcel Proust, Carson constructs an astonishing art that is able to arouse, like nothing else in recent years, new emotional and intellectual energies in her readers. As one reviewer commented, "There’s good reason that Carson’s reputation has soared to a level equal to that of the half-dozen most admired contemporary American poets. . . . She has . . . a vast habitat, to every bit of which she brings powerful perception and a freshness as startling as a loud knock at the door" (Calvin Bedient, "Celebrating Imperfection," a review of Men in the Off Hours. The New York Times Book Review, 5/14/00).

Geryon, a young boy who is also a winged red monster, reveals the volcanic terrain of his fragile, tormented soul in an autobiography he begins at the age of five. As he grows older, Geryon escapes his abusive brother and affectionate but ineffectual mother, finding solace behind the lens of his camera and in the arms of a young man named Herakles, a cavalier drifter who leaves Geryon at the peak of his infatuation. When Herakles reappears years later, Geryon again confronts the pain of his desire and embarks on a journey that unleashes his creative imagination to its fullest extent. By turns whimsical and haunting, erudite and accessible, richly layered and deceptively simple, Autobiography of Red is a profoundly moving portrait of an artist, a book about which Alice Munro commented, "I haven’t discovered any writing in years so marvelously disturbing."

1. As an epigraph to the introduction, Carson quotes Gertrude Stein: "I like the feeling of words doing as they want to do and as they have to do" [p. 3], and goes on to say that she admires the way Stesichoros broke away from the conventional use of language: "Stesichoros released being" [p. 5]. Which passages of Carson’s own writing in Autobiography of Red exemplify this ideal of unconventional language, unconventional perception, unconventional seeing?

2. Geryon, we are told, likes to plan his autobiography "in that blurred state between awake and asleep when too many intake valves are open in the soul" [p. 60]. As a child he has difficulty with the intensity and strangeness of his own perceptions. He suffers, but he also has powers that make him unique. Is there a connection between being a monster and being an artist? In what ways does Geryon’s creativity manifest itself as his story proceeds?

3. How important to his story–he calls himself, at one point, "loveslave" [p. 55]– is the relationship of Geryon’s masculinity to his lovelorn state? How important is his homosexuality? What is the poem making clear about the relationship between desire and will? If you have read The Beauty of the Husband, how does Geryon’s position compare to that of the wife?

4. Geryon’s autobiography begins with "Total Facts Known About Geryon" [p. 37]. Carson takes these elements from Stesichoros, but she creates a different ending. Instead of being killed by Herakles, Geryon proves himself to be one of the Yazcamac, "People who saw the inside of the volcano. / And came back" [pp. 128-29]. Why does she alter the original story’s plot?

5. How do the imagery and symbolism of the volcano work throughout the poem? How does the image of the volcano shed light on Geryon’s problems with inside and outside, as well as his fear of entrapment or confinement? More specifically, how does the Emily Dickinson poem that appears on page 22 ("The reticent volcano keeps / His never slumbering plan") relate to chapter XLVI of Geryon’s autobiography?

For discussion of the work of Anne Carson:

1. In "Essay on What I Think About Most" Carson writes that she admires Alkman’s poem because of "the impression it gives / of blurting out the truth in spite of itself" [p. 34]. Does the plain declarative style of Carson’s verse give the same impression? She further states that Alkman’s simplicity "is a fake / Alkman is not simple at all, / he is a master contriver" [Men in the Off Hours, pp. 34-35]. Might the same be said of Carson herself? What is simple about her work? What aspects of her work are complex, difficult, even impossible to comprehend? Are her contrivances part of an effort to alienate, or rather to seduce, the reader?

2. How does the work of Anne Carson change a reader’s expectations about poetry–about what poetry is, what poetry does, the emotional and intellectual effects of poetry upon a reader? Is she asking us–or forcing us–to reevaluate our aesthetic criteria?

3. In a strongly positive review, Calvin Bedient makes a comment on Carson’s work that might be read as a qualification: "Her spare, short-sentence style is built for speed. Her generalizations flare, then go out. Nothing struggles up into a vision, a large hold on things. The poems are self-consuming."5 Poets working in more traditional forms, like the sonnet for instance, have tended to create poems that work through a process of thought and arrive at a new conclusion or perspective; they offer the reader what Robert Frost called "a momentary stay against confusion." How does Carson’s work differ from more traditional forms of poetry? Is it troubling or is it liberating that she doesn’t seem bound to conclusions, to consoling gestures toward the reader?

4. The biographical note for The Beauty of the Husband offers only the statement, "Anne Carson lives in Canada." While it is a general rule in poetry that the speaker of any given poem is not necessarily the author and is often an invented persona, does Carson’s work lead you to certain assumptions about the facts of her life, her habits, her intellectual world, her losses, her griefs? Does her work have a deliberately confessional aspect–like that of Robert Lowell or Anne Sexton–or is it difficult to tell with Carson what has actually been experienced and what has been imagined? What issues, experiences, and concerns are repeated throughout her work?

Anne Carson was born in Canada in 1950. In addition to the works addressed in this guide, she has written Economy of the Unlost, Eros the Bittersweet and Glass, Irony and God. She has also produced translations of Sappho (If Not, Winter: Fragments of Sappho, forthcoming in 2002) and Electra of Sophocles. A 2000 MacArthur fellow, she is a professor of classics at McGill University.

The Stories of John Cheever

Just Above My Head

On the Road: the Original Scroll

Drown
Back to Top