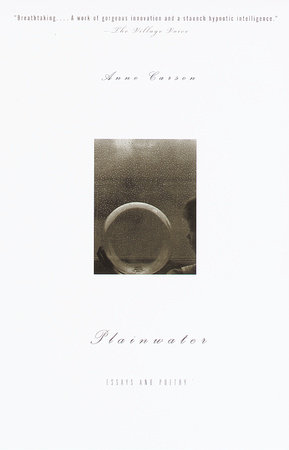 "Breathtaking. . . . A work of gorgeous innovation and a staunch hypnotic intelligence." —The Village Voice

The introduction, discussion questions, suggestions for further reading, and author biography that follow are designed to enhance your group’s reading and discussion of the work of Anne Carson, whom Michael Ondaatje praised as "the most exciting poet writing in English today." Carson is a winner of the prestigious MacArthur fellowship, and has been the recipient of much admiration in the literary world. She is credited with the invention of an entirely new kind of poetry, fusing free verse with prose passages, using pastiche to startling effect, combining searing emotion with austere intellect. Interspersing her own words with quotes and references to sources that range from classical Greek literature, St. Augustine, the Bible, and the Tao to Emily Dickinson, Virginia Woolf, Gertrude Stein, Franz Kafka, and Marcel Proust, Carson constructs an astonishing art that is able to arouse, like nothing else in recent years, new emotional and intellectual energies in her readers. As one reviewer commented, "There’s good reason that Carson’s reputation has soared to a level equal to that of the half-dozen most admired contemporary American poets. . . . She has . . . a vast habitat, to every bit of which she brings powerful perception and a freshness as startling as a loud knock at the door" (Calvin Bedient, "Celebrating Imperfection," a review of Men in the Off Hours. The New York Times Book Review, 5/14/00).

The poetry and prose collected in Plainwater–a present-day interview with a seventh-century B.C. poet, miniature lectures on topics as varied as orchids and Franz Kafka’s doomed sister Ottla, an extended exploration of "the anthropology of water" that includes a set of journeys made in response to love and love’s suffering–display a wide array of innovative approaches to the writer’s art. Varied and surprising, challenging and moving, they comprise the language of a fierce mind and a passionate heart. In Plainwater, Carson’s intellectual range dazzles the reader, even as her emotional wisdom awakens and provokes.

1. How does the interview that Carson imagines between herself and the classical Greek poet Mimnermos emphasize the difficulties of interpreting the writing of an author whose work exists only in fragments and of whose life very little is known? What creative use does Carson make of his fragments? Does she respond to fragments with fragments, or with a desire to fill in the missing parts of the story? Does it provoke a response of creative stimulation on the part of the reader, a desire to use the imagination to fill in the blanks in what we know or what we read?

2. In the introduction to "Short Talks," Carson writes, "I will do anything to avoid boredom. It is the task of a lifetime. You can never know enough, never work enough, never use the infinitives and participles oddly enough, never impede the movement harshly enough, never leave the mind quickly enough" [p. 29]. How is this statement reflected in the brief prose poems that follow? What does she mean by her desire to "leave the mind"? How is Carson’s intellectual restlessness manifested in Plainwater? What are the rewards of the resolutions she has stated in the quoted passage?

3. The poem "Canicula di Anna" is fiercely resistant to interpretation. The reader must ask, as the narrator does at the outset of the poem, "What do we need to know?" Is it significant that Anna and Anne are essentially the same name? Does the title shed any light on the poem’s many mysteries? (The word canicula is translated in Italian as heatwave; it is also the name for Sirius, the Dog star. A Latin dictionary suggests that the word is a diminutive of dog, as well as a name for a violent woman. In "Dirt and Desire," Carson discusses several classical writers who held that the "Dog Days" of late July were a time during which women were at their most lecherous [pp. 137-38].) What is the connection between Anna and the dogs in this poem? How important are the details about phenomenology, painting, the rivalry between Perugino and Michelangelo, and academia? Is it a sustained exercise in free invention without a cohesive story? Is it a poem that deliberately keeps the reader in a state of confusion?

4. Both of the lengthy journeys documented in "The Anthropology of Water" seem to have been taken in reaction to the illness of Carson’s father. What are the effects of her father on her sense of self? On her sexuality? Why is such an onerous physical and spiritual undertaking necessary in response to emotional pain or anguish? What is the relationship of the journeys in "The Anthropology of Water" to each other? What kinds of knowledge are sought, and found? What kinds of pain are released, or given expression?

5. In "The Anthropology of Water," Carson often uses an intimate conversational tone with the reader. See, for example, such statements as "I am not a person who feels easy talking about blood or desire," and "Love is, as you know, a harrowing event. I believed in taking an anthropological approach to that" [p. 189]. What is the effect of this direct address? What does she mean by taking an "anthropological approach"?

For discussion of the work of Anne Carson:

1. In "Essay on What I Think About Most" Carson writes that she admires Alkman’s poem because of "the impression it gives / of blurting out the truth in spite of itself" [p. 34]. Does the plain declarative style of Carson’s verse give the same impression? She further states that Alkman’s simplicity "is a fake / Alkman is not simple at all, / he is a master contriver" [Men in the Off Hours, pp. 34-35]. Might the same be said of Carson herself? What is simple about her work? What aspects of her work are complex, difficult, even impossible to comprehend? Are her contrivances part of an effort to alienate, or rather to seduce, the reader?

2. How does the work of Anne Carson change a reader’s expectations about poetry–about what poetry is, what poetry does, the emotional and intellectual effects of poetry upon a reader? Is she asking us–or forcing us–to reevaluate our aesthetic criteria?

3. In a strongly positive review, Calvin Bedient makes a comment on Carson’s work that might be read as a qualification: "Her spare, short-sentence style is built for speed. Her generalizations flare, then go out. Nothing struggles up into a vision, a large hold on things. The poems are self-consuming" (Calvin Bedient, "Celebrating Imperfection," a review of Men in the Off Hours. The New York Times Book Review, 5/14/00). Poets working in more traditional forms, like the sonnet for instance, have tended to create poems that work through a process of thought and arrive at a new conclusion or perspective; they offer the reader what Robert Frost called "a momentary stay against confusion." How does Carson’s work differ from more traditional forms of poetry? Is it troubling or is it liberating that she doesn’t seem bound to conclusions, to consoling gestures toward the reader?

4. The biographical note for The Beauty of the Husband offers only the statement, "Anne Carson lives in Canada." While it is a general rule in poetry that the speaker of any given poem is not necessarily the author and is often an invented persona, does Carson’s work lead you to certain assumptions about the facts of her life, her habits, her intellectual world, her losses, her griefs? Does her work have a deliberately confessional aspect–like that of Robert Lowell or Anne Sexton–or is it difficult to tell with Carson what has actually been experienced and what has been imagined? What issues, experiences, and concerns are repeated throughout her work?

Anne Carson was born in Canada in 1950. In addition to the works addressed in this guide, she has written Economy of the Unlost, Eros the Bittersweet and Glass, Irony and God. She has also produced translations of Sappho (If Not, Winter: Fragments of Sappho, forthcoming in 2002) and Electra of Sophocles. A 2000 MacArthur fellow, she is a professor of classics at McGill University.
Learn More About Plainwater
print

Sanskrit of the Body

The Happiness of this World

Wayfare
Back to Top