In the Unlikely Event Reader’s Guide 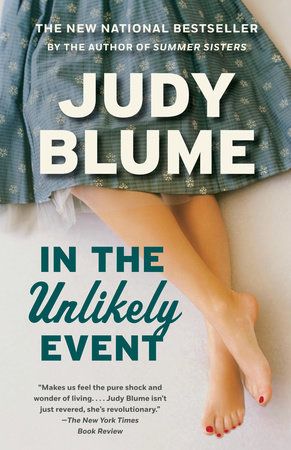 In the Unlikely Event Reader’s Guide

The questions that follow are intended to enhance your reading group’s discussion of In the Unlikely Event,Judy Blume’s gripping new novel about a New Jersey community that is left reeling after a series of tragic plane crashes strikes their town in the early 1950s.

In this brilliant new novel—her first for adults since Summer Sisters—Judy Blume takes us back to the 1950s and introduces us to the town of Elizabeth, New Jersey, where she herself grew up. Here she imagines and weaves together a vivid portrait of three generations of families, friends, and strangers, whose lives are profoundly changed during one winter. At the center of an extraordinary cast of characters are fifteen-year-old Miri Ammerman and her spirited single mother, Rusty. Their warm and resonant stories are set against the backdrop of a real-life tragedy that struck the town when a series of airplanes fell from the sky, leaving the community reeling. Gripping, authentic, and unforgettable, In the Unlikely Event has all the hallmarks of this renowned author’s deft narrative magic.

1. Discuss the environment of Elizabeth, New Jersey, before the crashes occur. How would you describe the community? How does the community band together after the first crash?

2. Throughout In the Unlikely Event, newspaper clippings are interspersed among the text. How do those articles help to provide context for the events that occur? How did they aid your understanding of changes in Elizabeth?

3. Class and status play a role throughout In the Unlikely Event. How does Miri see herself in the socioeconomic structure of Elizabeth? When does she feel most uncomfortable with her family’s position? How does her idea of relative wealth change once she meets Mason?

5. In the Unlikely Event is arguably a novel about the crashes as much as it is one about Henry Ammerman’s development as a journalist. How does Henry’s career evolve over the course of the novel? Is he ever conflicted by his role in reporting the tragedy? How has reportage changed since the 1950s?

6. How does Miri’s idea of friendship change throughout the novel? Discuss the scene in which Miri visits Natalie in the hospital. How does this incident set the tone for their relationship going forward?

7. Discuss the conspiracy theories that emerge after the crashes. For the teenagers in the novel, how do these rumors act as a means of coping?

8. On page 35, we read that “Miri couldn’t help wishing” she had a father like Dr. Osner. What does she desire in a relationship with a father? Discuss her reunion with her biological father. How does this experience change her? Does she ever find someone to fulfill the role of father in her life?

9. Discuss how working women are portrayed in the novel. What challenges do these women face? Can you point to any particular incidents in which the working women—particularly Rusty, Daisy, and Christina—face discrimination or judgment for their roles in the workplace?

10. The crashes create a sense of palpable fear and anxiety for the residents of Elizabeth throughout In the Unlikely Event. How does it affect Miri on a psychological level? What about Natalie?

11. Several budding romances play out over the course of In the Unlikely Event. What relationship most surprised you? Whom did you root for?

12. How is teen culture described throughout In the Unlikely Event? What influence does pop culture have on Miri and her peers? Were you able to trace any similarities between the teens of the 1950s and the teens of today?

13. Discuss the events of the reunion. Did the characters’ lives turn out differently from how you would have expected? Who changed the most?

14. Judy Blume has had a prolific career writing books for readers of all ages. How many of her previous novels, if any, have you read? How did your reading experience of In the Unlikely Event compare with her other works? Are you able to pinpoint anything in the writing or character development that felt distinctly “Judy Blume” in style or execution?

Judy Blume is one of America’s most beloved authors. She grew up in Elizabeth, New Jersey, and was a teenager in 1952 when the real events in this book took place. She has written books for all ages. Her twenty-eight previous titles includeAre You There God? It’s Me, Margaret; Forever; and Summer Sisters. Her books have sold more than eighty-five million copies in thirty-two languages. She is a champion of intellectual freedom, working with the National Coalition Against Censorship in support of writers, teachers, librarians, and students. In 2004, Blume was awarded the National Book Foundation’s Medal for Distinguished Contribution to American Letters. She lives in Key West and New York City.
Learn More About In the Unlikely Event
print

The Things We Do for Love

Sullivan’s Island
Back to Top