A Way From Home Reader’s Guide 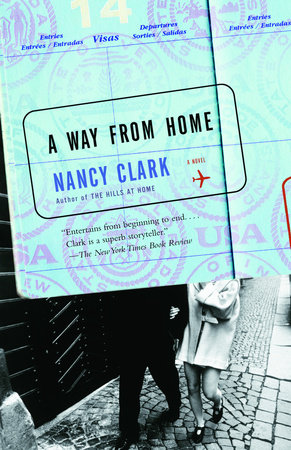 A Way From Home Reader’s Guide

"Entertains from beginning to end. . . . Clark is a superb storyteller."
—The New York Times Book Review

The introduction, questions, and suggestions for further reading that follow are designed to enliven your group’s discussion of Nancy Clark’s entertaining and deftly observed novel, A Way from Home.

When Becky and Alden Lowe move to Prague along with their teenage daughter, all bets are off in this village comedy gone global. Nancy Clark has given us a fresh take on Americans abroad in her funny yet sharp account of displaced persons losing and finding themselves once again.

It is 1992, and Becky and Alden Lowe have relocated to the fledgling democracy, Czechoslovakia. Alden is advising the Ministry of Finance on banking and investment matters, and Becky is working with women entrepreneurs. Everyone aspires to be or to do something new in the charged atmosphere of the reawakening city of Prague. The Lowes and their teenage daughter Julie (formerly Little Becky) live in a creaky old castle and seem to epitomize all that is optimistic, prosperous, and American. Alden lectures his team at the Ministry on the blessings of capitalism, Julie is embraced by her classmates at the International Youth school she attends, and Becky dusts herself off after two decades of playing wife and mother. She, too, feels suddenly freed from old obligations and at last she gives in to the importunate yearnings of an old lover who has remained faithful to her even as he betrayed every other trust given to him. Becky travels a long way from Europe to North Africa, and from the present to the past—and into the uncertain future—to be with him. Thereupon, Alden loses his way and Julie grows up much too quickly as Becky persists in her folly despite the damage she has done. The object of her heart’s desire is an unworthy recipient, but perhaps that’s the truest test of love, to adore the undeserving. It tests the reader, too, who will be drawn deeper and deeper into the heat and suffocating closeness of the pair’s Libyan idyll.

1. Would you like to live in a castle? Would you like to move to a foreign country and adapt to different ways and a different language? Alden and Becky traveled to Prague to help the locals build their new democracy—but who learns more from whom? How can a lack of proficiency in a new language affect one’s thought processes?

2. How much do you recall about the events of the early 1990s? The author has deliberately referenced real events and tied them into the personal stories of the characters, such as the upcoming “Velvet Divorce” that was to split Czechoslovakia into two countries, the Czech Republic and Slovakia.

3. The Czech characters are experiencing political freedom for the first time. By moving to a new country, Becky Lowe has also been given a new lease on life, with her new job and her increased self-confidence. But with freedom come choices and responsibility and accountability. Is freedom necessarily all it’s cracked up to be? How well do the Czech characters adapt to their new reality? How well does Becky adapt? Julie?

4. What do you make of Alden’s attempts to explain the capitalist system to his coworkers at the Ministry? Will you ever again regard a pie chart without confusion?

5. A Way from Home suggests the past is not static, but that, indeed, it is changeable. Discuss how new knowledge of past events colors the characters’ views of their past experiences. Discuss in what ways the present and the future are changed by this new knowledge. Why does Becky suddenly see the mistake that she made in marrying one man rather than another? Why must she act upon her realization? How does the image of Alden endlessly replaying film footage of himself and Becky strike you? Does Alden believe Becky ever loved him? Were they ever as happy together as he believed they were?

6. Compare and contrast Becky’s life in Libya with the life of that other runaway wife, Polla. Did you enjoy reading Polla’s letters? Did you feel that an ancient voice was speaking directly to you? Do the letters and their modern-day relevance to Becky’s situation support the author’s contention that the past remains very much alive? How did the final image of the letters strike you? Was the image a comic or a tragic one?

7. Did you think this book told a comic story, or a tragic one, or an ironic one? Was it a combination of all three? Did you find the variation of tone unsettling, or did it seem to reflect real life’s peaks and valleys?

8. Some male readers have told the author they came to hate Becky. Did you? Do you sympathize with her? Did you have a complicated reaction to her? Readers of The Hills at Home (in which Becky first appears as a model wife and mother) may feel particularly betrayed by her defection. Then again, readers of that book may applaud her for breaking away from the depressive Alden. But should Becky have abandoned her daughter? Readers of The Hills at Home may not be entirely sympathetic to Becky’s sons and daughter. If you have not read The Hills at Home, are you interested in going back to see what happened before the events described in A Way from Home? Are you aware that the author’s July and August picks up the story six years after the events described in A Way from Home?

9. What do you think of William? Are you sympathetic to his enduring love for Becky? Would you find such devotion oppressive?

10. The author says this is a love story for grown-ups. What does this mean? Although there are many images of sexuality which astute readers will pick up, the author does not mean that the book is “adult” in that way. This book keeps on going beyond the point where most fairy tale romances end as it relentlessly details the day-to-day life of the infatuated couple. Does Becky, who is a good person, become corrupt? (Is her acceptance of the favors of a corrupt regime excusable?) Must rediscovery of one’s self necessarily lead to a selfish act?

11. Do the aridity and desolation of the Libyan landscape make a suitable setting for William and Becky’s romance? What do you think of the Libyan characters? Did you like the way the Malian servants were treated?

12. Did you enjoy reading about Prague—and Maine and Rome and Tunisia and Libya?

13. What do you make of Alden’s reaction to Becky’s defection? Did you sympathize or did you want to tell him to get a grip? He seems given to sulks and doldrums. Can you think of other characters in literature who have been so inclined? Discuss his relationship with Franca—or their non-relationship despite Franca’s efforts. Were you hoping that Alden would turn to Franca? Would a relationship between them have pleased you more than the relationship between Becky and William?

14. What do you make of the Czech characters’ gradual reclamation of the castle?

15. Do you think Becky will ever come home? What will become of Alden? What will Julie do? Do you think that Julie learned the hardest lesson of all the characters in the novel? What do you make of her final definition of the verb “to love”? Why did the author choose to end the book on that note?

Nancy Clark is the author of The Hills at Home, A Way from Home, and July and August. A native of Massachusetts, she now makes her home in West Wilton, New Hampshire.

Before, During, After
Richard Bausch

The Procedure
Harry Mulisch
Back to Top