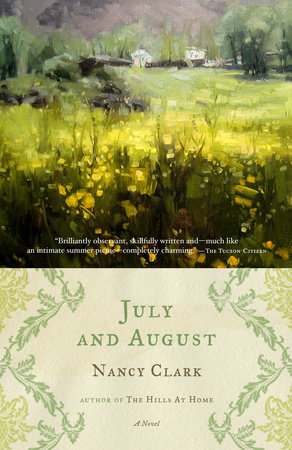 The introduction, questions, and suggestions for further reading that follow are intended to enhance your group’s discussion of July and August by Nancy Clark.

When Lily Hill’s family all returns to Towne, Massachusetts, for the months of July and August, a summer filled with comedy and drama ensues. There’s Sally, who stirs up trouble with Cam—a local girl who seems to be an honorary member of the Hill family; Glover, who is unexpectedly reunited with an old flame; and Julie, who may or may not be getting married depending on who you ask. Presiding over it all is the poised great Aunt Lily who has her own secrets to reveal before the summer is through. Nancy Clark gives us a beautiful exploration of the ways that a family evolves over time—and the ways in which it remains the same—in this rich summer story.

1. Nancy Clark has been compared to Jane Austen by The New York Times and The Christian Science Monitor. Do you think that this is an apt comparison? In what ways does Nancy Clark’s writing echo Jane Austen’s? Are there any marked differences?

2. The book and its postscript are each preceded by epigraphs that are taken from Emily Dickinson poems. Why do you think that Nancy Clark has included these epigraphs? How do they relate to the story?

3. Aunt Lily’s farm stand seems to be a character of its own in July and August. Discuss its inner workings. What role does it play within Towne and within Lily’s family? What do you make of the little girls’ rhyme signs and evident enjoyment of their work there? Would you like to shop at the Farm Stand? Do you think that Aunt Lily would approve of you and your manners?

4. What clues does the author provide to indicate that Ginger’s health is failing? How does she convey that it’s getting worse? The author remains vague about the details of Ginger’s illness, never using the word “cancer.” Why do you think she does so?

5. Although Betsy knows that her mother is sick, she decides to travel with Sally to Towne by car, thereby extending her journey. Do you think there’s a reason she’s delaying her arrival? Why?

6. Ginger apologizes to Cam for Sally’s rudeness when the two girls meet [p. 71]. Why does Ginger feel that Sally is being rude? What’s Cam’s reaction? Were you surprised by it? Discuss the relationship between Sally and Cam. In what ways do they find each other’s presence a challenge to their status within the family circle? Are there moments when the girls seem more like rivals than friends? Describe some of them. Do you think that Sally and Cam are fully realized characters within their own right, with thoughts, emotions, and desires that are nuanced and believable?

7. Betsy’s parenting style seems drastically different from Mrs. Samrin’s. In what ways? Did you think that Sally and Cam were allowed to wander too freely without supervision? Why? Does this kind of permissiveness feel old-fashioned to you, or do you feel Mrs. Samrin and Sally’s great aunts were justified in treating the children in this way? What do you think Nancy Clark is suggesting about childhood? What types of things were both the adults and children able to learn when the children were allowed to explore freely?

8. What was your first impression of Petal and Tarara? Why do you think Tarara storms out of Towne? And why does Petal elect to stay? Did your impression of her change as the novel progressed? If so, how?

9. Alden seems to have withdrawn from many aspects of daily life. What accounts for his withdrawal? Do you think that his reasons are justified? Why? What do you make of Lily’s attempts to create a romance between Alden and Hannah? Based on the author’s use of cold-fish imagery both at the picnic and later, in Hannah’s kitchen, how do you think she views this non-romance? What do you make of Hannah’s belief that she might mistakenly reanimate a poached fish some day? What is the author saying about the future of Alden and Hannah?

10. Lily doesn’t contradict a blind southern lady who refers to Cam as "a real fine little Yankee girl you’re raising up." Indeed, Lily expresses how reliant the family is upon Cam. What are some of the “Yankee” characteristics that the Southern woman is praising? Do you think that it is significant that Cam is the child of a recent immigrant family? Why? What do you think the author is suggesting when recent immigrant characters (Mrs. Samrin and Calliope Kariotis) offer Ginger solace and remedies derived from their native cultures, which are gratefully accepted by the Hill family? Do you think this portrait of the reciprocal influences of old families and newcomers upon one another is a true reflection of the ongoing evolution of American society? In a book that is very much about the process of "growing up," what does this say?

12. Julie seems unenthused about planning her wedding. In fact, she can barely motivate herself to pick out a wedding gown, and when she attempts to draft her engagement announcement, she cannot seem to finish it [p. 198-200]. Why do you think that Julie has so much trouble with the wedding planning? Do you think her reasons are justified? Why?

13. Although Becky is thousands of miles away from her family, they all react to her absence. Discuss some examples. Why is Becky so far away from her children? How do her children feel about the choices that Becky has made in her life? Do you agree with them?

14. While Ginevra and Petal have already spent considerable time together, Ginevra only really begins to warm to Petal once they have spent the afternoon folding origami doves together. Why does Ginevra dislike Petal originally? What do you think accounts for her change of heart?

15. While Sally and Cam are playing in Lily’s house, they make a surprising discovery. What is it? And, what do they learn about Lily because of it? Were you as surprised by the discovery as Lily’s nieces were?

16. Babe Palmer seems to have an adversarial relationship with many members of the Hill family. Describe some of the reasons for this friction. Do you agree with the Hills’ reasons for disliking her? How did you feel about her?

17. While talking to Mrs. Samrin in the Casa di Napoli, Julie begins to weep uncontrollably. What makes her so upset? Why does Mrs. Samrin hope that “her own presence here on this rainy evening in this brightly lighted place could serve as proof to Julie that there was always cause for hope” [p. 245]?

18. Nancy Clark waits until the book’s postscript to reveal whether or not Nicholas Davenant exists. Were you surprised to learn the truth? Why or why not? Did learning the truth change your reading of July and August?

Nancy Clark is the author of A Way from Home and The Hills at Home. A native of Massachussets, she now makes her home in West Wilton, New Hampshire.

Love Among the Ruins
Robert Clark