The Hills at Home Reader’s Guide 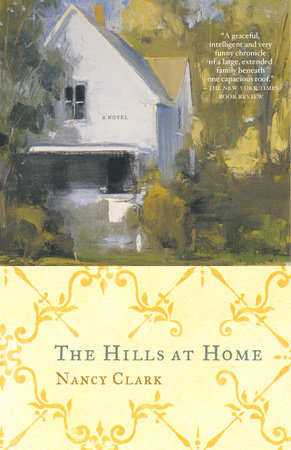 The Hills at Home Reader’s Guide

“A graceful, intelligent and very funny chronicle of a large, extended family beneath one capacious roof.” —The New York Times Book Review

When the Hills take over their family home in Towne, Massachusetts in The Hills at Home, it feels as though Nancy Clark has reworked a Jane Austen novel. In this delightful first novel, she captures precisely and unsparingly the manners, mores, and idiosyncrasies of an extended New England family. We hope your book group will find that the following introduction, discussion questions, suggested reading list, and author biography enhance and enliven a discussion of this entertaining and deftly observed novel.

Aging matron Lily Hill lives unobtrusively and comfortably alone in her large, old, and quintessentially New England Federalist-style house on the edge of town. But in the summer of 1989, a sudden and strange thing happens: various family members come for a visit, fill the house to bursting, and show no signs of leaving as the summer comes to an end. First, brother Harvey, a retired widower, comes with the intention of repainting the shutters. Next, niece Ginger Hill Lowe Tuckerman drags her teenage daughter from Kansas to escape her husband—and, purportedly, to write a book. Ginger’s brother, Lily’s nephew Alden Hill Lowe, a banker newly laid off from Wall Street, arrives next, with his wife Becky and their four unruly teenagers in tow. Finally, Harvey’s grandson Arthur, a struggling comedian, and his girlfriend Phoebe, find a space to roost in the barn. Just when Lily has perfected rising in the morning before the others in order to use the house’s only bathroom first, along comes Andy Happening. Loosely related to Becky’s old friend William Baskett, Andy is a Ph.D. student in sociology in need of a dissertation. Note cards in hand and a vague thesis about American middle-class families in mind, Andy, too, makes himself at home in the Hill mansion and begins observing and interviewing the family members.

Just when the visitors seem to be settling into the groove of their new lives, the outside world intrudes. Little does the family know that as they gather to watch the collapse of the Berlin Wall on television, the repercussions of this event will turn their lives upside down once again. With a handling of plot that is as precise and clever as her rendering of character and conversation, Clark brings the novel to a surprising and satisfying conclusion.

1. Do any of the family members share characteristics or personality traits? For example, do Alden and Ginger bear any resemblance to each other? What about Lily and Harvey? Betsy and Ginger? Are Glover, Brooks, and Rollins just chips off the old block? Is there anything that all the Hills have in common? Are these common traits what make them a family? If not, what is it that binds them together?

2. How do each of the family members relate to Lily? Can Lily be properly called the matron of the family? Is there a central character in the novel, and, if so, is it Lily or someone else? How does Clark balance the different viewpoints of the characters while keeping the novel centered and focused?

3. Do the family members communicate well? Do they like, or simply tolerate, each other? The whole family, including Lily, seems nonplussed by the fact that nearly an entire extended family is living under one roof. Is this a reasonable reaction? Is the situation believable? What is the significance of the novel’s epigraph, “I should have called it/Something you somehow haven’t to deserve” from the poem “The Death of the Hired Man” by Robert Frost?

4. From her easy acceptance of her sudden lifestyle change to the tissues she perpetually keeps up her sleeve, Becky is portrayed as the perfect wife and mother. Is Becky too good to be true or is she believable? Are William’s opinions of Becky and her marriage and family fair assessments [e.g., p. 368]? The character of Ginger invites comparison to Becky—how is each woman portrayed? Is either character more fully developed than the other? Are any aspects of Becky’s or Ginger’s character less developed, and if so, why might Clark have chosen to emphasize certain aspects of their characters and not others?

6. Betsy is “struck by the way in which life at Aunt Lily’s house has been pared down to mere essences, like the four inches of warmish bath water, the forty-watt lightbulbs, the good-night kisses addressed to the air and not to her cheek” [p. 47]. What was Betsy’s life like before? How is each Hill forced to adapt as a result of his or her move to Towne? Are these changes for the worse, or do their lives actually improve in any way? Does Lily’s lifestyle change, or do the family members conform to her way of life?

7. Upon being interviewed by the FBI, Lily’s first reaction is: “Oh, what would people think, official inquiries being made in the village, and Hill family heirlooms going unquietly on sale for all to see” [p. 405]. Is this a typical reaction by the longtime resident of a small town? How does Clark paint small-town life? How is it contrasted with Ginger’s life in Kansas, or Alden’s and Becky’s life in New York City? Is Towne like every other small town, or is it a uniquely New England town? What was it about small-town life that attracted the scattered Hills?

8. What statement might Andy’s thesis make about the Hill family? Does the fact that the family accepts Andy so readily signify anything about their nature? How does Andy’s presence help emphasize the family’s similar traits and their ties to each other? How is the reader’s view of the Hill family influenced by Andy’s observations?

9. Clark writes, “For Andy had, in his extended academic past, been labeled a Romantic. He had been warned against employing too novelistic an approach. . . . Data did not develop along the lines of character, theme, plot, conflict, and resolution. His various mentors called for more statistics. . . . Andy had been accused of inserting too much of himself into his research” [p. 146]. Does Andy’s behavior refute or confirm these accusations?

10. What does the reader learn about the family through the description of the Hill home (the furniture and other antiquities, the food served and the dishes upon which it is served, etc.)? What do these items reveal about the family’s customs and traditions? Are these accoutrements essential to a New England upper-middle-class family, and how would the Hills be defined without them? How might a New Englander feel about Clark’s portrait?

12. Why do things seem to work out so well for each of the Hills? Are they a charmed family? What kind of world is it where all someone has to do in order to solve any problem is to “make a few calls” [p. 385]?

13. Of the significant world events in 1989, FBI agent Cadmus Stewart observes, “We have to think about the future. . . . There seems to be more future now than there formerly was. We have to decide what we’re going to do about all those places and people who previously didn’t figure, as far as we were concerned” [p. 402]. Do the Hills share Stewart’s America-centric view of the world? How does each character benefit from the fall of Communism? How might this resolution resonate with today’s readers in view of America’s current role in world politics? Why might Clark have chosen this year in American history in which to set her portrait of the Hill family, and is the novel still timely today?

14. What is the role of nature and the outdoors for each of the Hills? How do the seasons chart the plot of the book?

15. To what genre of literature does The Hills at Home belong? Is it a comedy? A comedy of manners? Does the novel have a satirical tone? Does the resolution of the novel beg comparison to an Austen novel or even a Shakespearean play?

16. What is the significance of all the water imagery in the novel? Is there any relationship between the Noah’s Ark reference in the last paragraph and the only other biblical image in the novel of “all of the Hills standing about Jerusalem,” which appears in Betsy’s imagination [p. 99]?

17. The Hills at Home is the first of three novels devoted to the Hill family. Are there any threads of the story that seem unresolved? What might happen to Lily and her family next?

Nancy Clark is a native of Massachusetts and a graduate of Trinity College. She lives in West Wilton, New Hampshire.

Jane Austen, Pride and Prejudice and Sense and Sensibility; Elizabeth Bowen, The Death of the Heart; John Cheever, The Wapshot Chronicle; George Eliot, Middlemarch; Jonathan Franzen, The Corrections; Stella Gibbons, Cold Comfort Farm; Kent Haruf, Plainsong; John Irving, The Hotel New Hampshire; George S. Kaufman and Moss Hart, Three Plays: The Man Who Came to Dinner/Once in a Lifetime/You Can’t Take It With You; Elinor Lipman, Then She Found Me and The Dearly Departed; Richard Russo, Empire Falls; Peter Taylor, A Summons To Memphis; Anne Tyler, Dinner at the Homesick Restaurant.
Learn More About The Hills at Home
print

My One Square Inch of Alaska
Sharon Short

Away
Jane Urquhart
Back to Top