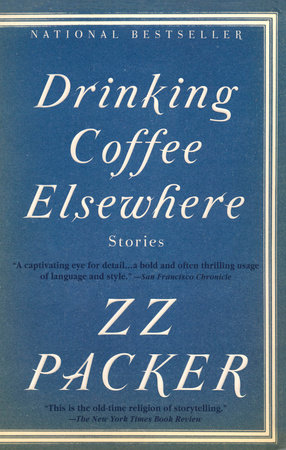 With stories in The New Yorker‘s debut fiction issue and in The Best American Short Stories 2000, and as the winner of a Whiting Writers’ Award and a Rona Jaffe Foundation Writers’ Award, ZZ Packer has already achieved what most writers only dream about-all prior to publication of her first book.

Now, in Drinking Coffee Elsewhere, her impressive range and talent are abundantly evident. Packer dazzles with her command of language-surprising and delighting us with unexpected turns and indelible images, as she takes us into the lives of characters on the periphery, unsure of where they belong. With penetrating insight that belies her youth-she was only nineteen years old when Seventeen magazine printed her first published story-Packer takes us to a Girl Scout camp, where a troupe of black girls are confronted with a group of white girls, whose defining feature turns out to be not their race but their disabilities; to the Million Man March on Washington, where a young man must decide where his allegiance to his father lies; to Japan, where an international group of drifters find themselves starving, unable to find work.

Drinking Coffee Elsewhere is a striking debut-fresh, versatile, and captivating. It introduces us to an arresting and unforgettable new American voice.

A New Yorker debut writer, ZZ Packer has had short stories published in the Best American Short Stories, 2000 (edited by E. L. Doctorow), Harper’s, Story magazine, and in the anthology 25 and Under: Fiction, as well as a story read on NPR’s “Selected Shorts.” A graduate of Yale and the Iowa Writers’ Workshop, she is the recipient of a Whiting Writers’ Award and a Rona Jaffe Foundation Writers’ Award. She has held Wallace Stegner and Truman Capote fellowships from Stanford University, where she is currently a Jones Lecturer.

When She Was Good

The Safety of Objects
Back to Top