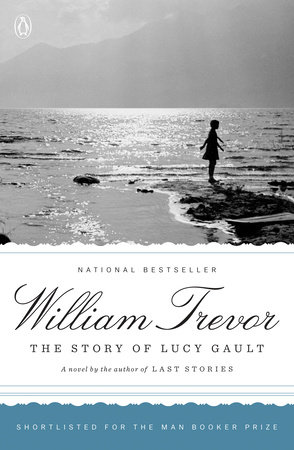 William Trevor has long been regarded as one of Ireland’s most evocative writers, a prose stylist of the highest order with a Chekhovian awareness of the emotional undercurrents of his characters’ lives. And in The Story of Lucy Gault, Trevor lives up to, perhaps even surpasses, that reputation in a novel that explores the tragic consequences for one family of Ireland’s deep-seated political strife.

The Story of Lucy Gault is set in provincial Ireland in the early 1920s at the height of civil turmoil and anti-English violence. Everard Gault, a retired Anglo-Irish army captain married to an Englishwoman, shoots and wounds one of the boys who has come in the night to set their house afire. This act sets in motion a chain of events that are to have grievous effects on the Gault family. Convinced their attackers will return, Everard and Heloise decide they must leave Ireland. But their daughter Lucy, heartbroken at such a prospect, runs away. When some of her clothes are found by the ocean shore, her parents assume she has committed suicide. In their grief they decide to travel, aimlessly at first, before settling in Italy and then Switzerland, losing touch entirely with Ireland. They remain unaware that Lucy did not die but has lived out the years waiting for their return, unable to forgive herself for her youthful recklessness. And, indeed, the problem of forgiveness lies at the heart of The Story of Lucy Gault—forgiveness for the act of terror that drove the family away, for Everard and Heloise’s mistaken conclusion that their daughter had drowned, and for all the words left unspoken that might have changed their fates.

With a subtlety and emotional insight rarely matched in contemporary fiction, The Story of Lucy Gault follows the inexorable unfolding of a few chance events that alter the lives of a family and unforgettably illuminate the contours of the human condition.

William Trevor was born in Mitchelstown, County Cork, in 1928, and spent his childhood in provincial Ireland. Among his books are Two Lives, My House in Umbria, The Collected Stories, Felicia’s Journey,After Rain, Death in Summer, and The Hill Bachelors. He is a member of the Irish Academy of Letters and lives in Devon, England.

Learn More About The Story of Lucy Gault
print

The Other Einstein
Marie Benedict

The Pursuit of Love; Love in a Cold Climate
Nancy Mitford

The Leopard Is Loose
Stephen Harrigan

Ride With Me
Thomas B. Costain

On Canaan’s Side
Sebastian Barry

A Good American
Alex George
Back to Top