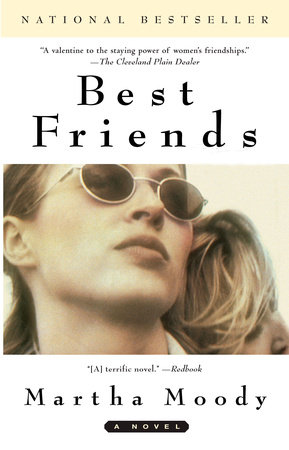 “You’ll definitely see elements of yourself and your girlfriends in this terrific novel,” is how Redbook described Best Friends—which may explain why this first novel from an unknown author has been quietly building to a surprising hardcover success. It’s the kind of book that is shared among friends, an instantly familiar and emotionally immediate story of two women who become college roommates, confidantes, and friends for life.

Clare, from a working-class Protestant family, has never met anyone like Sally: wealthy, pretty, and Jewish, barely emancipated from her close-knit Los Angeles family. Over the decades, Clare is drawn deeper into the circle of Sally’s family—until she uncovers the kind of secret that no one wants to tell a best friend.

Martha Moody is a physician. Her short story, “Like the Arrival of Angels”, was a finalist for the Best American Short Stories of 1985. Best Friends is her first novel.

The Grief of Others

The Myth of You and Me

The Misfortune of Marion Palm

The Unfinished Work of Elizabeth D.

The Good Wife Strikes Back

Life Drawing
Back to Top