The Opposite of Fate Reader’s Guide 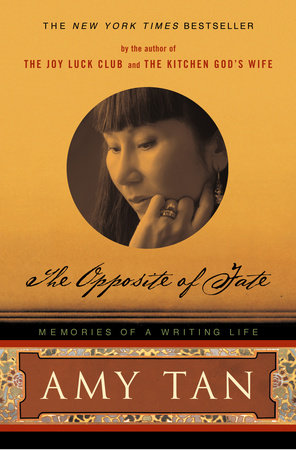 The Opposite of Fate Reader’s Guide

print
The Opposite of Fate Reader’s Guide

In a note to the reader at the beginning of this collection, Amy Tan admits that The Opposite of Fate is, in effect, really a series of “musings,” each one linked to the other by her own “fascination with fate, both blind and blessed, and its many alternatives.” These alternatives, she goes on to say, can be summed up in one word—“hope.” Indeed, this is very much a book about life’s twists and turns, its tragedies and small joys and the sometimes silly or even desperate actions we take to avert a particular course of events. Irrespective of the unique direction of each story, the notion of fate is a central tenet here, and will inevitably lead readers to look at their own lives and the role fate plays therein.

Yet there is a genuineness to these writings that offers much more than just an author’s interest in fate. Readers will quickly appreciate that Tan is divulging herself—writing spontaneously about her innermost thoughts and concerns. It’s all here, life and emotions and intimate, even trivial details. Joy Luck Club, Rock Bottom Remainders and never ending book tours, everything is laid out unapologetically and unabashedly for all to see, so that in following this author on her journey, we are inadvertently given a great gift, namely, an autobiography. And since she hasn’t necessarily set out to write one, The Opposite of Fate may be an autobiography in the truest sense of the word—one devoid of the usual self-conscious biases.

The term “autobiography,” though, may not suffice. Perhaps, “autobiography within a writing workshop, within a family history, within a discourse on Chinese America” is more appropriate. Here are vignettes, writings, and jotted down thoughts, deep reflections and off the cuff observations, pieces of unfinished stories interspersed with email responses to friends and the media. From a prize-winning submission to a writing contest at age 8 (she won a transistor radio) to a eulogy given by the author at the memorial of her editor, to the many poignant pieces discussing Tan’s relationship with her beloved yet emotionally wounded mother, we’ve been given a personal invitation into the mind and motivations of a great writer.

The beauty of this compilation lies in its format. Since the writings are drawn from various points in time, the reader gets a multi-faceted view of pivotal events in the author’s life. Moreover, each piece can be read separately in quick intervals or together as a seamless narrative, and the effect is no more diminished. Moving, heart-wrenching, funny and most certainly thought-provoking, these are “musings” to be contemplated and savored many times again and again.

Amy Tan was born in Oakland, California in 1952, several years after her mother and father immigrated to the San Francisco Bay area from China. When she was eight, her essay, “What the Library Means to Me,” won first prize among elementary school participants, for which Tan received a transistor radio and publication in the local newspaper. Upon the deaths of her brother and father in 1967 and 1968 from brain tumors, the family began a haphazard journey through Europe, before settling in Montreux, Switzerland, where Tan graduated in her junior year in 1969.

For the next seven years, Tan attended five schools. She first went to Linfield College in McMinnville, Oregon, and there, on a blind date, met her future husband, Lou DeMattei. She followed him to San Jose, where she enrolled at San Jose City College. She next attended San Jose State University, and, while working two part-time jobs, became an English honor’s student and a President’s Scholar. In 1972, Tan graduated with honors, receiving a B.A. with a double major in English and Linguistics. She was awarded a scholarship to attend the Summer Linguistics Institute at the University of California, Santa Cruz. In 1973, she earned her M.A. in Linguistics, also from San Jose State University, and then was awarded a Graduate Minority Fellowship under the affirmative action program at the University of California, Berkeley, where she enrolled as a doctoral student in linguistics.

Following the murder of one of her closest friends, Tan left her doctoral program before completing her degree, and for the next five years worked as a language development consultant and project director for programs serving disabled children from birth to age five. She then became a freelance business writer specializing in corporate communications for such companies as AT&T, IBM, and Pacific Bell.

In 1985, when a psychiatrist treating Tan for her self-described workaholism fell asleep for the third time during one of their sessions, Tan quit therapy and decided to write fiction instead. She attended her first writer’s workshop, the Squaw Valley Community of Writers, where she met the writer Molly Giles, who later led a small workshop that often met in Tan’s house. In 1986, Tan’s first short story, “End Game” appeared in the now defunct magazine, FM Five. The story was later reprinted inSeventeen, which attracted the attention of literary agent, Sandra Dijkstra, who encouraged Tan to continue writing fiction. When Tan had completed three stories, her agent submitted them, along with a proposal for a collection, which was bought by editor Faith Sale at G.P. Putnam’s Sons. In 1989, The Joy Luck Club was published and, through word-of-mouth endorsements by independent booksellers, became a surprise bestseller, logging more than 40 weeks on the New York Times list. Though Tan wrote the book as a collection of linked short stories, reviewers enthusiastically and erroneously referred to the book as an intricately woven “novel.” The label stuck. The Joy Luck Club was nominated for the National Book Award and the National Book Critics Award. It received the Commonwealth Gold Award and the Bay Area Book Reviewers Award. It was adapted into a feature film in 1994, for which Tan was a co-screenwriter with Ron Bass and a co-producer with Bass and Wayne Wang.

Tan’s second book, The Kitchen God’s Wife, was published in 1991, followed by The Hundred Secret Senses in 1995. Both books appeared on The New York Times bestseller list. Her latest novel, The Bonesetter’s Daughter, is scheduled for publication in February 2001.

Tan’s short stories and essays have appeared in The Atlantic, Grand Street, Harper’s, The New Yorker, Threepenny Review,Ski, and others. Her essay, “Mother Tongue” was chosen for Best American Essays in 1991 and has been widely anthologized. Tan’s books are often included as part of the multicultural curriculum of high schools and colleges, an honor which caused her much ambivalence and led her to writing a speech, “Required Reading and Other Dangerous Subjects,” which she has since delivered in universities across the country. She is the editor for the 1999 edition of Best American Short Stories. Her work has been translated into Chinese, Japanese, Korean, Spanish, German, French, Italian, Dutch, Portuguese, Catalan, Finnish, Norwegian, Swedish, Danish, Icelandic, Russian, Estonian, Serbo-Croation, Czech, Polish, Hebrew, Greek, Tagalog, and Indonesian.

In addition, Tan has written two children’s books, The Moon Lady (1992) and The Chinese Siamese Cat (1994). The latter is now being developed into a children’s television series, and is part of a symphony program of words and music produced and conducted by George Daughtery. Along with novelist Stephen King and columnist Dave Barry, Tan is a member of the literary garage band, the Rock Bottom Remainders, for which she sings the Nancy Sinatra classic, “These Boots Are Made for Walking,” to raise money for literacy and first amendment rights groups. Tan’s rendition of the pop culture classic can be heard on the CD album, “Stranger than Fiction,” which benefits the PEN Writers Fund.

Tan lives in San Francisco and New York with her husband, Lou DeMattei, their cat, Sagwa, and their two Yorkshire terriers, Bubba and Lilli.

Learn More About The Opposite of Fate
print

Listening Is an Act of Love
Dave Isay

My Life in Middlemarch
Rebecca Mead

Year of the Monkey
Patti Smith

A Field Guide to Getting Lost
Rebecca Solnit

Black Is the Body
Emily Bernard

She’s Not There
Jennifer Finney Boylan