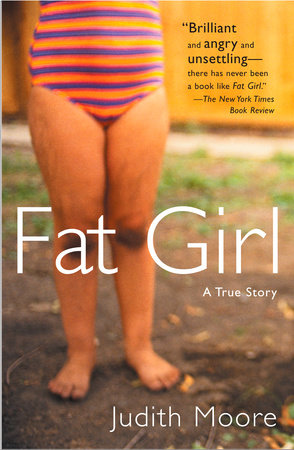 INTRODUCTION
A nonfiction She’s Come Undone, Fat Girl is a powerfully honest and darkly riveting memoir of obsession with food and body image, penned by a Guggenheim and NEA award-winning writer. For any woman who’s ever had a love/hate relationship with food and with how she looks, for anyone who’s ever knowingly or unconsciously used food to fill a hole in his heart, Fat Girl is a brilliantly rendered, angst-filled coming-of-age story of gain and loss.

Judith Moore, recipient of two National Endowments for the Arts and a Guggenheim fellowship, is the author of the critically acclaimed memoir Never Eat Your Heart Out, a New York Times Notable Book of the Year. Moore is the books editor and senior editor for The San Diego Reader and lives in Berkeley, California.

A CONVERSATION WITH JUDITH MOORE

Why did you feel yours was an important story to tell?

I never think about a story I want to write as important or not important. What IS important to me is that a story I write longs to be told. What eventually became the book, Fat Girl, repeatedly said, “Write me. Tell my secrets.”

I was interested in telling truths about the body –not only the “fat” body—that are not often written. Much on my mind were two memories. One was something Lillian Hellman wrote, I believe in Pentimento—that Dashiell Hammett objected to her “feminine odors.” Hellman was criticized for even mentioning these odors. Or this is how I remember the story. Perhaps I remember it incorrectly.

The other memory was this. When I first started writing, an old friend, a wise old friend, sent me a postcard onto which he’d copied something Adrienne Rich wrote: “The dutiful daughter of the fathers is only a hack.”

I was interested in how to set the story that became Fat Girl. I wanted the story to sound told rather than written, whispered into an ear. I wanted the book to be a confessional box and for the reader to be the narrator’s confessor.

I wanted the book to be short. I wanted a reader to be able to read it in an evening or afternoon.

Who or what motivated you to tell it?

I wanted to honor the fat girl within me and other heavy or once-heavy men and women and tell a truth not often told. Many “truths” told about fatness celebrate fatness’s brighter side—weight loss, jolliness, an almost religious struggle “to lose.”

Many of the reviews for this book speak of your bravery and courage in telling your story. Do you feel that writing this book took bravery?

No, writing this book took the usual bravery that first drafts take. You just have to sit there and get the words down on paper. Writing first drafts, for me, takes almost physical courage. I have to make myself stay at the computer or the notebook. When I find myself wanting to run from my work (which, in fact, is only a disinclination to face facts), I set a timer. I may set the timer to as short a time as thirty minutes. During those minutes I tell myself, “No answering of phones, no looking out windows, no twiddling through a poetry anthology or a magazine, write.” This helps.

When I begin first drafts I type atop the screen or write on the top margin of paper: DON’T WRITE WRITING. SPEAK FROM THE HEART. TALK TO THE PAGE.

Which parts of the story were most difficult for you to put down on paper?

The section where I broke into the Fisher’s house. When one of my friends, a therapist, read Fat Girl, he said, “Chapter Fourteen was creepy.” I knew when I was rustling through the Fisher house and making bologna sandwiches that what I was doing was “creepy” and I knew when I wrote down that I’d spread mustard on bread for those sandwiches and eaten them and pretended that I was part of the Fisher family that other people would also find those afternoons in the Fisher’s house creepy.

In what ways have you learned to cope with issues from your childhood now that you are an adult?

People ask me if I beat my children. I didn’t. I didn’t yell at them. We gardened and cooked and canned and made paper dolls and doll houses. We raised generations of guinea pigs. We all had dogs. I read aloud to the girls, probably more than they wanted me to do. I guess that what we did was a lot of what I wished my mother had done with me. I was a terrific cook and gardener. We grew much of our own food, we preserved it. We grew flowers and house plants. I was an awful seamstress; I made dresses for the girls that fell apart in the washing machine. I was a fair-to-middling housewife. My daughters’ childhoods are my happiest memories.

I do not cope all that well with much of “life.” As Freud had it, love (eros) and work (unalienated labor) are the fundamental aspects of adulthood. I am good at work and not good at love. I am extremely responsible. I have worked for the same organization for 21 years. I am dependable, consistent, thorough. I am imaginative and quick and collegial, working well with others.

In love between men and women I am not so good. Physical intimacies scare me. Although I have close friendships with straight and gay men, I have remained celibate for many years. I cannot cope with romance.

I am “high-strung” and easily frightened. I jump when horns honk or a glass falls from a café table; like many beaten children, I exhibit a high startle reflex. I only feel truly safe when I am alone, another trait of badly beaten children. Deep down I am always afraid of being slapped or kicked. I never have slept well. I fear abandonment. I manage transitions poorly. I’m a mess.

I have had much therapy. The therapy did help me cope with who I am and how I feel. But my past is my past, and my past—a dirty hem on a long skirt—trails along with me.

I would guess that I do not see myself all that clearly. I would guess too, that, truth told, I am at least mildly what we used to speak of as “mentally ill.”

A book that is giving me the usual trouble. However, I enjoy the trouble. I am grateful for the work.

Riding in Cars with Boys

The Rules of Inheritance

Empty
Back to Top