The Custom of the Country Reader’s Guide 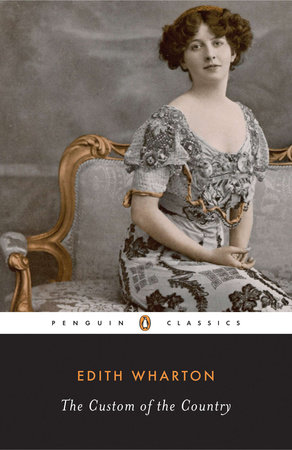 The Custom of the Country Reader’s Guide

print
The Custom of the Country Reader’s Guide

Edith Wharton published her ninth novel, The Custom of the Country, in 1913, just after she had finalized her divorce and moved permanently to France. Somewhat naturally, it is a book about divorce, still considered an indecent topic for literature at that time. Wharton explores with satire and wisdom divorce as a distinctly American custom on the eve of the twentieth century. Near the end of the novel, matrons of French society (of the famous Faubourg Saint–Germain district) look on in horror as a parade of wealthy American women, twice– or thrice–married, attempt to infiltrate aristocratic society.

Nothing is more scandalous to them than the introduction to their group of Indiana Frusk, a plumber’s daughter and former wife of a modest Midwesterner, now newly married to the wealthy financier

James Rolliver. As the novel’s heroine, the unscrupulous Undine Spragg, learns from the Marquise de Trezac, formerly Miss Wincher of Potash Springs, a husband may have “friends” of the opposite sex but divorce from his wife is “out of the question” (p. 437). Throughout the novel, Undine both adapts and calls into question these various customs of marriage and divorce.

While the French may consider divorce a common American disease, America has its own Faubourg, called Washington Square, where dissolved marriages are viewed with equal scorn. We see this clearly in the novel’s opening section. Undine’s father, having made a small fortune in the Midwestern town of Apex, takes aim at New York high society. After two years of missteps, the Spraggs find their entree through the possible marriage between their daughter Undine and the romantic yet ineffectual Ralph Marvell, heir to one of New York’s oldest families. In order to reach these elevated heights she must conceal a sensitive fact about her past: she was once married and divorced to a roughand– tumble youth back in Apex. In fact, Undine was once engaged to another man of Apex and, later in New York, to an Austrian riding instructor who was later exposed as a fraud. These facts have the potential to upset the Spragg/Marvell union. Ralph’s mother provides some dinner table advice to Undine: “a divorced woman is still—thank heaven!—at a decided disadvantage” (p. 307). That roughand– tumble youth, Elmer Moffatt, arrives in New York with his own outsized ambitions and he agrees to exchange his discretion for an introduction to Old New York by Undine.

The marriage of Ralph and Undine vividly establishes the binary relationship between Old New York and New York’s nouveaux riches, two groups vastly different in their means, their habitations, and their values. The Marvells, Fairfords, and Dragonets all trace their roots to the country’s Founding Fathers. They live in comfortable but modest townhouses around Washington Square, near Greenwich Village. The men all receive an Ivy League education and then “lapse into more or less cultivated inaction,” exhibiting “a tranquil disdain for mere money–getting” (p. 297). Their only concern is with preserving their lineage and their time–honored traditions. In contrast to them stand the Driscolls and Van Degens, families whose wealth derives from suspicious financial transactions and market speculations. They build immense, garish mansions on New York’s Upper West Side, which can barely contain their restless energy and insatiable appetite for new material objects. As the Princess Estradina comments late in the novel, referring to Undine and her class of social upstarts, “You appear to live on change and excitement” (p. 517).

The relationship between these two groups is often couched in terms of competitive, even Darwinian, survival. By the time Wharton started writing The Custom of the Country, Darwin’s biological theories of evolution were being applied to human society; these ideas had great resonance among her readers. Ralph at one point refers to his mother and grandfather as “Aborigines . . . doomed to rapid extinction with the advance of the invading race” (p. 297). Later, after it is clear that his wife has abandoned Ralph and their child in search of a wealthier husband in Europe, his good friend Charles Bowen—a character whose name and observational skills invoke Darwin himself—claims that “poor Ralph was a survival, and destined, as such, to go down in any conflict with the rising forces” (p. 482). Finally, Ralph’s cousin Clare, who is also entangled in a loveless marriage to a paragon of the nouveaux riches, despairingly says to Ralph “you and I are completely out of date” (p. 482). In this contest between social species, Ralph and his breed are no match for the likes of Undine, who possesses that essential Darwinian talent for survival, an “instinct of adapting herself to whatever company she was in” (p. 341).

Ralph’s suicide conveniently clears the way for Undine, now a widow and not a divorcee, to marry the French nobleman Raymond de Chelles. In this section of the novel, Wharton draws a satiric portrait of the French aristocracy in its demise, a portrait in contradistinction to that of the invading American plutocracy.

It quickly dawns on Undine that the wealth and power of the Faubourg Saint–Germain is just as illusory as that of Washington Square. Whatever wealth they possess is tied up in the expensive maintenance of their estates and their outdated traditions. Without the financial help of American heiresses like Looty Arlington, who marries Raymond’s profligate brother, their existence is threatened. At the appropriately named estate of St. Desart, Undine grows bored and eventually forces a conflict with Raymond by arranging the sale of the family’s prized tapestries. In the argument that ensues, the differences in the values of the two classes— the old French and the new American—are shown in vivid relief. “In America,” Undine declaims, “we’re not ashamed to sell what we can’t afford to keep” (p. 523).

Undine, ever the serial nuptialist, accepts the proposal of the buyer of the tapestries, none other than Elmer Moffatt. Moffatt emerges at the novel’s end with Carnegie–like wealth and ambition. He has shrewdly and aggressively manipulated a series of men—from Undine’s father to Ralph to Harmon Driscoll—on the way to achieving tycoon status. Though he still speaks like a street tough he is now considered a “gentleman . . . [and] the greatest American collector” of European art (p. 524). Moffatt even demonstrates a rare affection for Undine’s neglected child Paul. It would seem that, at long last, Undine has met her match (again) in the Darwinian game of survival and that she will either retire in marital bliss or receive her longoverdue comeuppance. Wharton, however, will have none of these options, keeping her heroine true to her life of ceaseless striving. On the novel’s last page, Undine yearns to become an ambassador’s wife, and readers can have little doubt about her ability to achieve that goal, no matter the cost.

One of the major figures in American literature, Edith Wharton was born Edith Newbold Jones on January 24, 1862, to a wealthy New York family. As a child, the family moved among family residences in New York, Europe, and Newport, Rhode Island. A precocious child, Wharton read omnivorously in several languages and even attempted a novel at the age of eleven. Her first publication came at the age of thirteen, when a magazine printed her translations of several German poems. Despite Wharton’s obvious talents, her

parents did not encourage her to pursue a life in letters.

After the death of her father in 1885, she married Edward “Teddy” Wharton, a Boston banker, who did not share his wife’s literary and cultural interests. Theirs was a joyless marriage and in 1907 Wharton began a brief but passionate affair with a journalist named Morton Fullerton. Shortly thereafter she moved to France. Meanwhile, Teddy began embezzling money from his wife’s estate to support his own mistress. He became mentally unstable and the couple divorced in 1913. Wharton never remarried.

Wharton published several stories, in such magazines as The Atlantic Monthly and Scribner’s, before her first novel, The Valley of Decision, appeared in 1902. Her first critical success, and still one of her most beloved works, was The House of Mirth, published in 1905. In her long, prolific career, Wharton published sixteen novels and novellas, eight collections of short stories, several works of nonfiction, and two volumes

of poetry. Her greatest literary achievement was The Age of Innocence (1920), which won the Pulitzer Prize in fiction. She also received the French Legion of Honor for her philanthropic work during World War I, and in 1923, she became the first woman to receive an honorary doctorate from Yale. Wharton was a member of the National Institute of Arts and Letters and the American Academy of Arts and Letters. She died of a stroke in her home in France in 1937.


Learn More About The Custom of the Country
print

Sons and Lovers
Back to Top