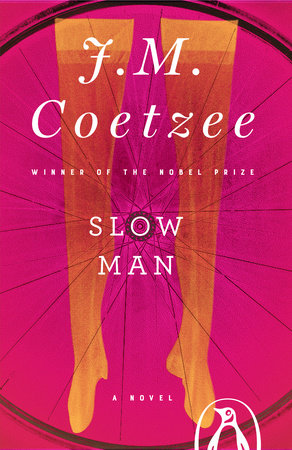 INTRODUCTION
Slow Man begins, abruptly, with a devastating blow. While bicycling on McGill Road, sixty-year-old Paul Rayment is hit by a car, thrown through the air and badly injured. When he awakens in a hospital, he is told that his right leg must be amputated.

The shock of this sudden loss casts his previous life into sharp and painful relief. Without children, having accomplished nothing important, Paul feels he has led a meaningless life: “If in the course of his life he has done no significant harm, he had done no good either. . . . He will leave no trace behind, not even an heir to carry on his name.” He has occupied himself merely with “looking after his interests, quietly prospering, attracting no attention” (p. 19). Now he must decide how he is going to respond to his predicament in the time that remains to him.

Coetzee is no sentimentalist and readers hoping for a heartwarming story of misfortune overcome and misery transmuted into joy will find something far more complex in Slow Man. Stubborn and embittered, Paul Rayment refuses a prosthetic leg and sinks into a deep despondency. But when the home nurse Marijana Jokic arrives, Paul falls precipitously, and foolishly, in love. Marijana’s tenderness and matter-of-fact acceptance of Paul’s condition comes as a healing balm both to his injury and to his loneliness. In a moment of passion, Paul blurts out his love for the married Marijana and sets in motion a chain of events that he can neither predict nor control. Lacking a family of his own, Paul wishes to extend a protective hand over the Jokics, but when he offers to pay for their son’s tuition at an expensive boarding school, Mr. Jokic suspects an affair, the family is bitterly divided, and as a result of his “good” intentions, Paul finds himself without a nurse.

Even more disquieting for Paul is the arrival of novelist Elizabeth Costello, the eponymous heroine of Coetzee’s previous work of fiction. Elizabeth shows up unannounced on Paul’s doorstep, possessed of an authorial omniscience about Paul’s life and thoughts. She insists that Paul came to her, though she never makes clear how this is supposed to have happened, and Paul wants nothing more than to get her out of his life. Is Elizabeth merely using Paul as a subject for a story, as Paul suspects, or does she have some higher, more mysterious purpose? Coetzee never lets us know, exactly, how we are to interpret Elizabeth’s presence. In one of their many arguments, Elizabeth tells Paul: “This is your story, not mine. The moment you decide to take charge, I will fade away” (p. 100). Whether or not Paul will ever “take charge” is one of the many questions that drives the novel to its surprising conclusion.

In prose that is both hard-edged and richly suggestive, Coetzee explores with consummate skill the promptings of morality and the tensions we all feel between will and surrender, passion and reflection, youth and age.

J. M. Coetzee has won many literary awards, including three CNA prizes (South Africa’s premier literary award), two Booker prizes, the Prix Etranger Femina, the Jerusalem Prize, the Irish Times International Fiction Prize, and the Commonwealth Writers Prize. He was awarded the Nobel Prize in Literature in 2003. He is the author of ten works of fiction, including Waiting for the Barbarians, Age of Iron, Disgrace, andElizabeth Costello. He lives in Australia.

Beatrice and Virgil
Yann Martel
Back to Top