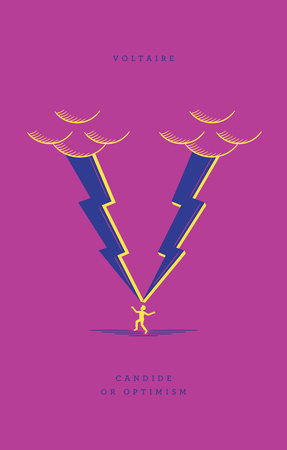 INTRODUCTION
Beginning with the expulsion of its eponymous hero from “the best of all possible castles” and the loss of his beloved Cunégonde, Candide takes the form of a classic journey story. Candide must endure a series of misfortunes and trials before he can be reunited with his beloved and regain a qualified kind of redemption. It is in the misfortunes that Candide and others suffer in the novel that Voltaire cuts through the pretensions, hypocrisies, and outright idiocies of the Age of Reason.

The philosopher Pangloss, Candide’s tutor, insists that they live in “the best of all possible worlds” and maintains that view through various sophistries, but reality tells a different story. In the course of the novel, Candide travels far and wide across Europe, South America (where he spends a pleasant month in the fabled land of Eldorado), and Asia in search of Cunégonde. Earthquakes, slavery, murder, floggings, hangings, the Spanish Inquisition, and other niceties of the era greet him on his way and serve to weaken his cherished optimism. He also encounters characters who view the world quite differently, most notably Martin, who asserts that he has “scarcely seen a town that did not desire the ruin of the next town, nor a family that did not wish to exterminate some other family” (p. 56). Early in the novel, while pondering the relationship between effects and causes, as he has been taught to do, Candide wanders into a war-ravaged village, where he sees “old men riddled with wounds . . . their wives lay dying, their throats cut, clutching their children . . . young girls in their last agonies, disemboweled after having satisfied the natural urges of various heroes . . .” (p. 8). This juxtaposition of abstract conceptualizing and real brutality underscores the gulf between human beliefs and human behaviors that runs throughout the novel, and the effect is amusing, disturbing, and deflating all at once. Man is capable of clever philosophizing, yes, but savagery, superstition, and ignorance still rule the day. The phrase “natural urges of various heroes” is characteristic of Voltaire’s piercing irony. In Voltaire’s world, as in ours, soldiers are not always heroes, priests are not always godly, and philosophers are not always very helpful in guiding us away from human folly.

Indeed, much of the fun of reading Candide lies in applying Voltaire’s ironic wit to the pretensions and hypocrisies of our own age. What would Voltaire say about our current political and religious leaders? How would he view the intellectual and artistic culture of our time? In this crisp new translation by Theo Cuffe, Voltaire speaks to us more sharply and clearly than ever.

(François-Marie Arouet) was born in 1694 and educated at a Jesuit school in Paris. Determined to pursue a literary career, he won a reputation as a writer of satirical plays, poetry, philosophy, and novels that resulted in spells of imprisonment in the Bastille, some of his books being banned, and eventual exile from France for his attacks on the Regent and criticism of the French government. In addition to Candide, his works include Zadig, Micromégas and Other Short Fictions, Letters on England, and Philosophical Dictionary. Voltaire died in 1778, after a triumphal return to Paris.

Theo Cuffe was educated in Dublin and at the Sorbonne. His translations include Voltaire’s Micromégas and Other Short Fictions for Penguin Classics.

Michael Wood is Charles Barnwell Straut Class of 1923 Professor of English and Professor of Comparative Literature at Princeton University and the author of The Magician’s Doubts: Nabokov and the Risks of Fiction, Franz Kafka, and The Road to Delphi: The Life and Afterlife of Oracles.

Metamorphosis and Other Stories

The Death of Ivan Ilyich

The Yellow Wall-Paper and Selected Writings
Back to Top